October is the wicked hot season here and most people just say “get through it and the rains will come in November.” Not going to lie, I am definitely looking forward to it cooling off but it has also given me an opportunity to check out some pools with new friends. 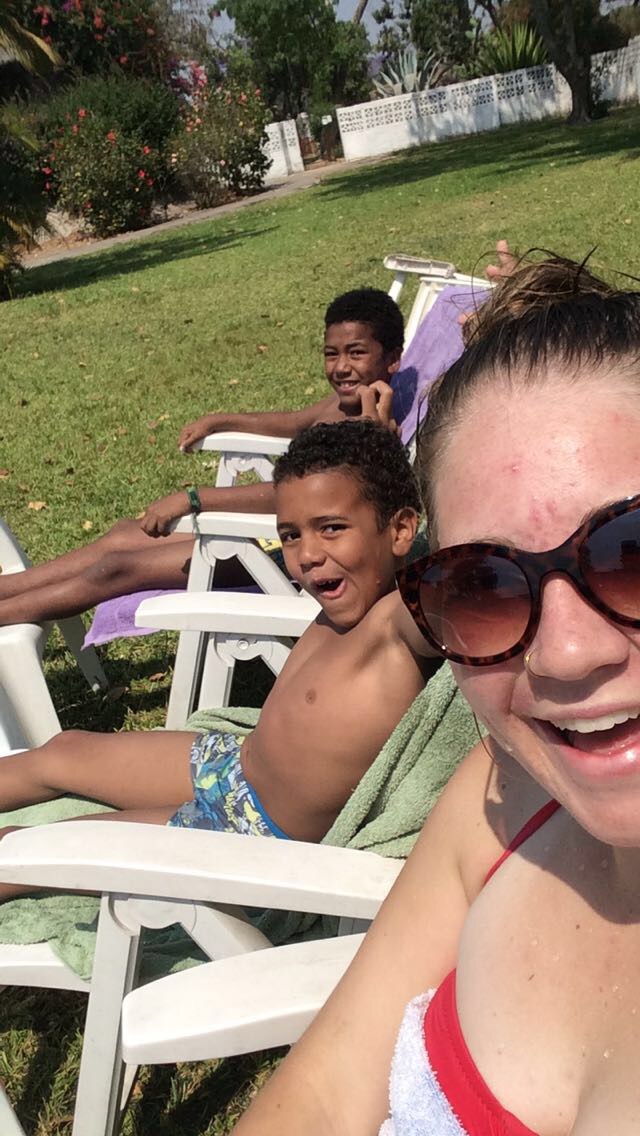 So while you guys are getting out your scrafs and chugging down Pumpkin Spice Lattes, I am rubbing in sunscreen and perfecting my cannonball.
October has been very fun, as you’ll see below.

Love to all,
April

For a one-stop shop for all my links, check out my tumblr page.

I often say to the children or even to friends as a humorous goodbye, “Pórtate bien!”  Behave yourself!”  I certainly said it to my children as they grew up.
We have a pretty clear idea of what that means when we say it to a child, but what does it mean when we say it to an adult?  The Bible tells us in the letter to Colossians, 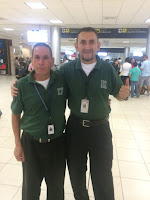 What does it look like to clothe yourself with compassion, kindness, humility, gentleness, and patience?  Every Saturday, for me, it looks like the baggage guys at the Tegucigalpa airport.  These are the guys who look out for the teams as they arrive in baggage claim, “Amanda?” they ask to locate my team. So many team leaders are relieved when they see those friendly faces ready to help! They have guarded baggage, helped a team member through the airport when they travel back alone, helped me personally many times.  I trust them and depend on them for so many things.  It is wonderful to have my airport family watching over me and the people I care about.

They also care about each other.  This is a competitive business for little money, yet they operate like a family.  This includes my other friends, like Roberto, Alfredo, and Patricia who are older, disabled, and unable to work.  They come to the airport looking for help.  Recently, Roberto was in the hospital.  Every week I gave some lempira to Alfredo or one of the baggage guys to give to Roberto.  All these folks are poor and could have used the money to feed themselves and their families.  Guess what?  Roberto received the money I sent for him!

The experience that moved me the most is one in which I did not behave well.  It was one of those Saturdays.  I was delivering a team to the airport and then picking up a new team.  The new team was coming on an early flight so I had little time to get one team settled before receiving the new one.  I was rushed and distracted.  As I left the parking lot, hurrying to meet the team vans, I passed my friend, Antony.  Antony lost both of his legs and has terrible scars from a horrible electrical accident.  As I raced by, he said, “My son needs a hat for school!”  It was National Indigeneous Week and I knew exactly what he needed and why it was important.  I raced on, not even stopping to say hi.  (Not a Honduran way to behave.)  After getting the outgoing team settled, I was hurrying downstairs to wait for the incoming team.  Out of the corner of my eye, I saw the perfect hat for Antony’s son.  I asked the sales clerk how much it was.  “$20.”  “That’s too much.  Nevermind,” I replied.  (Note:  What was wrong with me?  Seriously?  I was not clothed with compassion and kindness.  I was wearing selfishness and self-absorption instead.)  “It’s for the guy with no legs,” I added.  Immediately she replied, “You can have it for 50% off.”  She looked lovely in her compassion outfit.  Sheepishly I bought the hat. 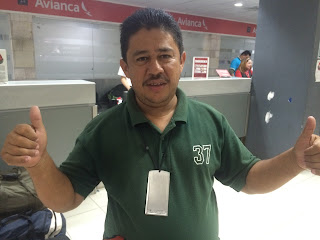 However, when I got downstairs I couldn’t see Antony.  Erick, one of my baggage friends asked me what I was looking for. I explained and he told me Antony was across the very busy intersection.  Looking at the time, and knowing how hard it is to cross streets on foot, I said, “I bought this hat for him but I don’t have time to walk over there.”  Not even hestitating for a moment, Erick took the hat and said, “I’ll take it to him.”  This occurred during prime time for baggage handlers.  All the US airlines were arriving with large teams with tons of luggage, yet he left his post to help me and Antony!
When he returned, he found me and asked me to come to the door.  “Look!” he said, pointing to a young man with one leg on crutches.  “He has one leg!  And he has a little boy!”  Erick had seen this young man (disabled people have an extremely difficult time finding work in a country with NO safety net) and brought him back to the airport to find help!  I smiled, told him my son also has one leg, and helped him.
I think this is a wonderful story up to this point.  The guys are helping each other, looking out for their fellow man, even at their own expense.  But that isn’t the best part of the story… 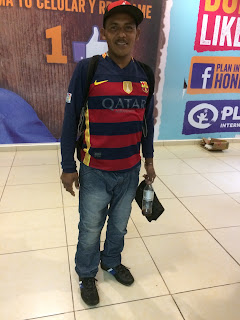 Two weeks later, I was back at the airport to meet a new team.  4 of the baggage guys rushed up to me, all talking at once.  They were so excited to tell me this young man had been back and HAD A NEW LEG!  As they were telling me this, they were showing me how well he was walking with HIS NEW LEG!  Imagine, these guys struggle every day to earn enough to feed their families and yet they were celebrating this anonymous young man’s victory!  A NEW LEG!  “You should have seen him walk!”
That is how we should behave.  Toss out our clothes of arrogance, selfishness, pride, judgment, and cold heartedness.  Instead, put on the clothes my airport friends wear – compassion, humility, kindness, patience, gentleness and, one more thing, joy.
Let’s all get a new wardrobe and behave ourselves from now on!

If you live outside of South Africa, you are probably not aware of the crisis at our universities. A little more than a year ago, university students started to protest, demanding no increase (or a very slight increase at worse) for the 2017 academic school year. Their rallying cry was #feesmustfall. At first, the protests were peaceful and limited to a handful of universities, but then some troublemakers got involved. A few months down the line, the protests turned violent. Now there are protests at all of the major universities in the country and at many of our minor ones. The students are demanding free tertiary education. Their protests have turned incredibly violent over the past few months and have escalated during the past two-three weeks. University buildings, including resident halls (dormitories), have been burned down; classes have been canceled; faculty cars have been set alight. Last week, at one of our universities in Cape Town, three security guards nearly died when the building they were in was set on fire. At another one of our universities, some students took a faculty member hostage. At Wits University in Johannesburg, some of the scenes between students and police/ security guards look like a battle zone. Yesterday, students marched on Parliament in Cape Town. The protest turned violent.

There are no winners in this crisis. Many people who were sympathetic to the students’ cause are no longer, due to the violent turn of the protests. The situation is complex, and many of the students are demanding more things besides free tertiary education. Personally, I think a lot of their demands and the ethos of their movement have roots in the injustice and racism of the past and of the current times. There are two sides to every story, but I think most South Africans would agree that the protests have gotten out of control. The violence is not justified and is only hurting the students’ cause, education as a whole and the country at large. Everyone living in South Africa is affected. There are no winners.

Wayne and I have several young friends either at university or who are preparing to attend universities who are affected by the turmoil. Please pray for our young friends, and please join us in prayer for the following:

At our recent Anglicans Ablaze conference, one of the sessions was “Quo Vadis South Africa?”—meaning, where are you going, South Africa? In many ways, the country is at a crossroads. There are so many major things going on, things to either make or break this country in the future. The student protests are a major player at this crossroads. Prayer changes things. Thank you for joining us in prayer for our students and universities and for all of those who are involved.

These kiddos are the joy of my life in Zambia

Kazangula is a small town (if it can be called that) on the watery border of Zambia and Botswana. A…

Kazangula is a small town (if it
can be called that) on the watery border of Zambia and Botswana. A group of 12
of us from GLO had taken the long, hot journey to Southern Province for a 3 day
mission trip. And this was our first day of evangelism.

Within a few minutes, our group
of four came across two women building a mud house. We were greeted with kind
but slightly skeptical smiles and mud-caked hands. Immediately the two older
preachers we were with began to ask these ladies bombarding questions like “Do
you know God?” “What do you think about church?” And I sat there a bit lost and
helpless because I did not speak any of the 5 languages floating around the
community.

As they continued the
conversation impregnated with long pauses and open Bibles, I saw my friend Emmanuel
move towards their house. He looked at the pile of mud they were mixing for the
wall, saw that their two yellow water containers were empty, and with less than
a word he picked them up and walked away. The preachers continued to talk as I
watched him walk into the distance, the yellow containers getting smaller and
smaller. He stopped to ask a man something and continued up the hill to a
half-finished church building. After about 10 minutes he was coming back down
to us, sweat beading on his forehead in the midday sun, water sloshing on his jeans
from the containers.

In that moment, I realized that
THAT is the kind of missionary I want to be. I want to be a sweating missionary.
The people of this country hear lots of words—it is not uncommon for church
service to be 5 hours long and school is notoriously lecture-based. So how many
times do we come across someone who is not concerned with words but is willing
to get down into the mud of life with us? It means being able to really see
people and their needs, which, yes, does take a certain level of cultural
competency that I am still working on. But maybe I can bumble, sweat, learn and
love my way towards that goal.

So when the preachers turned to me and asked
if I wanted to say anything. I shook my head. No. Emmanuel without even
speaking had said everything I wanted to say.