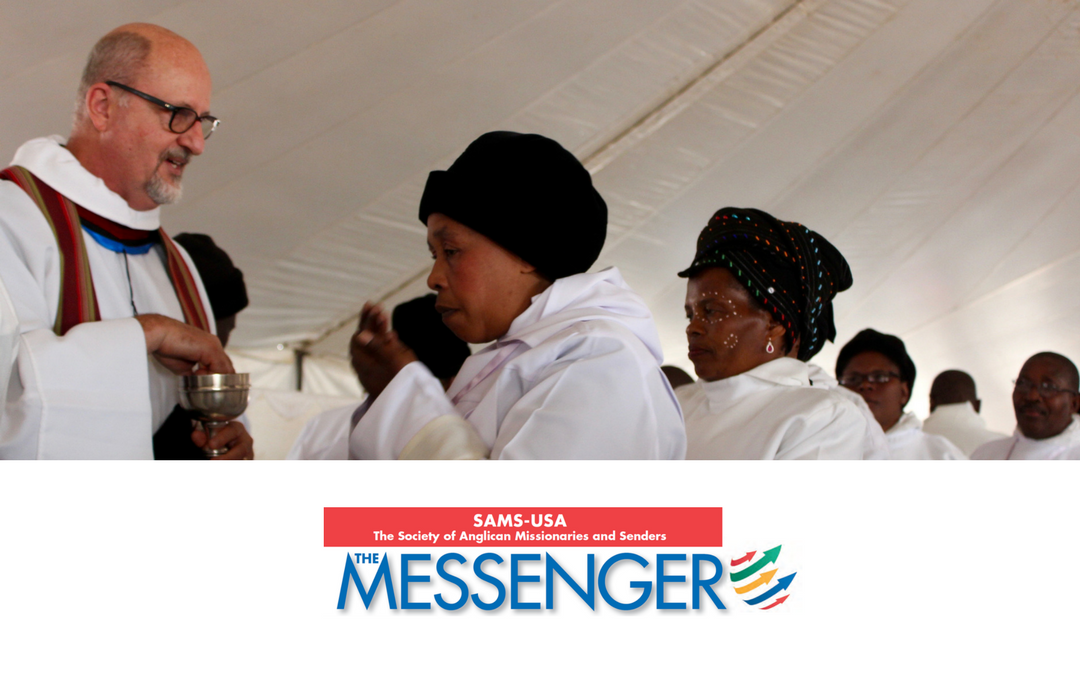 SAMS’ The Messenger is now available online! Discover how the Lord is working in and through your missionaries and keep them in your prayers with the missionary prayer calendar. View it here! 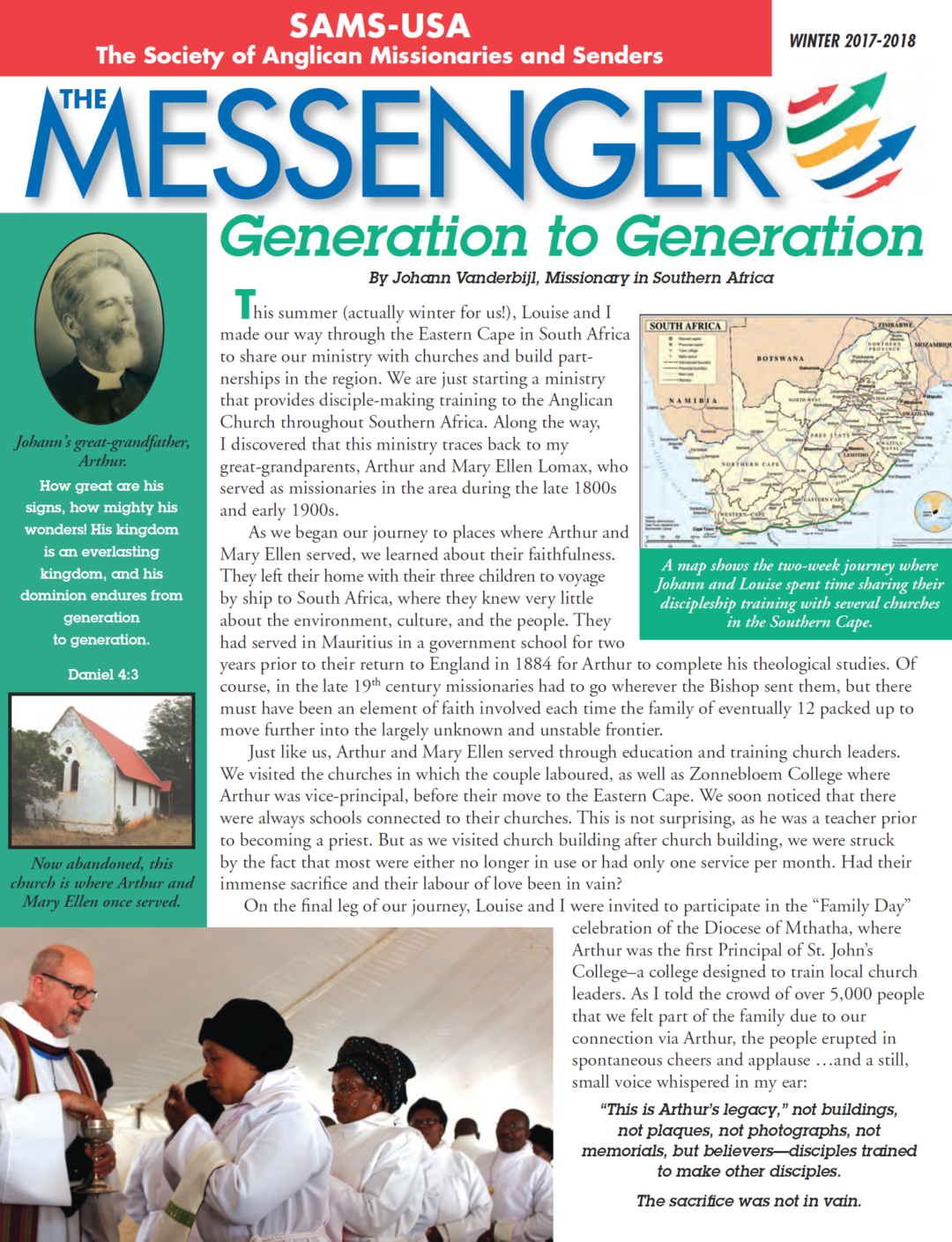 What is that awful smell? Something is
clearly rotten in the state of the guesthouse kitchen! I hope it isn’t our
lunch!
Day Two has begun.
Our night had been interrupted periodically
as folks were arriving all hours of the night and morning. Nobody seemed to
have received the “Please be quiet, people sleeping” memo. The birds apparently
had not received it either. Needless to say, our day started in the early hours
of the morning. Thankfully, the kitchen had left hot water in flasks so we
could make coffee. And then that rotten smell invaded the guesthouse…
Thankfully, we had to attend early morning
Eucharist and could escape from the powerful, pungent, pervasive pong that hung
over the whole house. It was a full-on Eucharist with testimonies, prayers for
healing, Choirs, and a possible demonic manifestation included for good
measure. Then there was breakfast, which took a long time. Needless to say, we
started late…but as everything we say has to be translated, we will skip the
Dann Spader videos and make up time that way.
We had to stop at noon for prayers, but
thankfully there were no further unexpected events. Lunch was from one until
two, but as folks had been falling asleep throughout our teaching in the
morning, we were not expecting anything better after lunch! Singing lively
songs and doing stretch exercises did help to revive the group when the heads
drooped too low…but we are still behind our usual schedule.
We had Evening Prayer, followed by two
choir groups…stunning singing, that’s all I can say…even though I wanted
desperately to get on with the teaching! Some times, one just has to chill and
let God be God, no?
We decided to show two of the Dann Spader
videos as we figured out that about two thirds did understand enough English to
follow the message. Everyone seemed to appreciate them and applauded at the end
of both.
Supper and bed…thankfully it is much cooler
and we hope to rest well.

Voices…I heard voices…loud voices…and it
was as light as day. I jumped out of bed, thinking we had overslept, only to
find that it was 3:45. The city of Maputo never sleeps. From then on I tossed
and turned until it was time to get up. Not a good start to our first day in
Mozambique.
Bishop Carlos, his dear wife, Hortensia,
and his daughter (a medical doctor) Graca, went out of their way to make us
feel welcome. Even though it was so late and we were all very tired, they
presented us with a lavish feast. Maputo is a port city, so fish is a staple
diet…and oh the scrumptious spices!
At 8 AM we went to the Diocesan office and
met up with Padre Campira. He and I met at the Growing the Church coordinators
meetings back in December last year. Deacon Mauricio could not meet us because
he had had a very bad accident just last week…he is fine, but his car is in bad
shape…but, unlike in the US, cars are not written off or totalled here…there
are merely knocked back into shape. As long as they can move, they are back on the
road in no time. He told us that he had stopped skidding a few inches short of
a deep ravine and that he believed the angels were looking out for him that day.
Padre Campira drove with us to show us the
way. We picked up Chico, the J-Life representative, further down the road.
Traffic had prevented him from getting to us on time. Maputo is very much like
Addis without the livestock. Driving here is not for the faint hearted. But it is
hot…not as hot as Gambella, but enough to make you feel uncomfortable. Even the
locals were complaining.
The speed limit along the road varied from
60 km to 80 km and even 100 km in one spot. For the most part we drove 60 as
there are traffic police everywhere and they will apparently stop you on a
whim. Needless to say, it took us a long time to get to our destination!
Maciene is a rather small, rural village
nestled among tall coconut trees and date palms. The Anglican centre has mango
and orange trees as well as manioc fields…all in all, a picturesque place. We
settled into the guesthouse, scouted out the place, had Evening Prayer where we
heard some wonderful singing (cantare!), introduced ourselves to those present,
and had supper. Deacon Mauricio had joined us earlier and we chatted about his
accident. I told them that we had had a sense of a spiritual battle going on in
the heavenly realm regarding this visit. They all agreed. Chico told us that
two nights ago, their gas line mysteriously started leaking while they were
asleep. His wife woke up because of the smell and alerted him to the fact. He
turned it off, but could not find the source of the leak. I told them that we
had many intercessors praying for us and for this training course.
When Satan goes out of his way to hinder
the advance of the Gospel, something great must be waiting down the line. We
are all anticipation. Come, Holy Spirit…come… 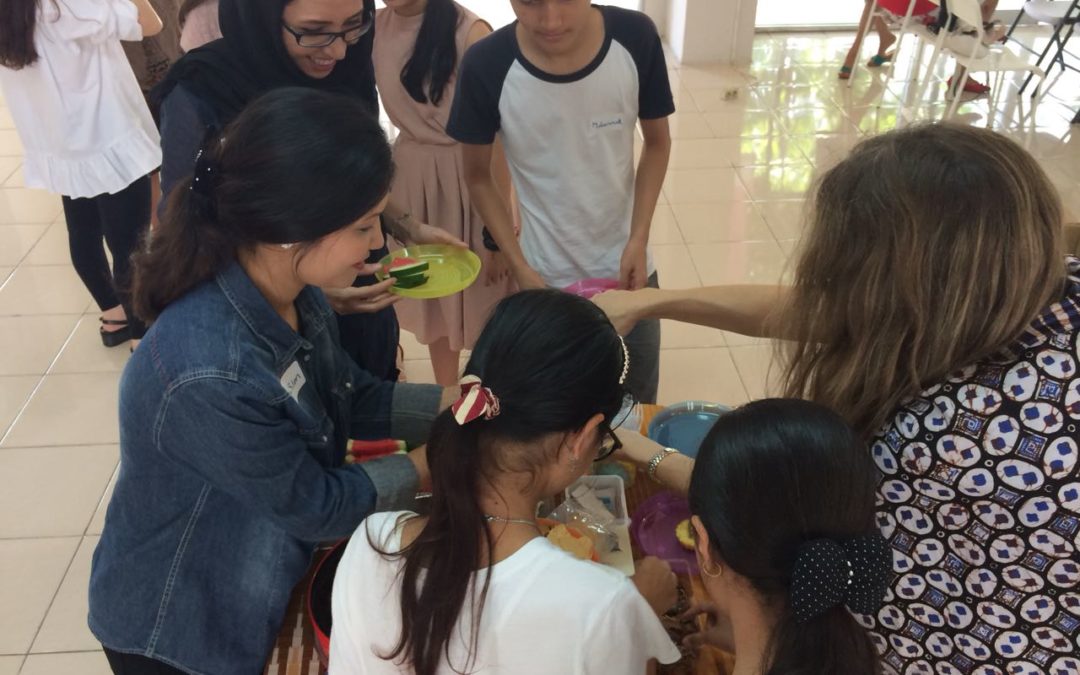 Have you ever heard your grandparents tell you, “Back in my day, we used to walk to school five miles each way in the dead of winter with no shoes?”  Of course, the exaggerated story was to inspire you to count your blessings.  Allow us to inspire you with a non-embellished tale of our refugees from Afghanistan.  Desperate to find a church where they can freely worship, this ever resilient group, travels by car from the mountains outside of Jakarta to Providence Anglican Church every Sunday.  The trip takes almost three hours each way!   Can you imagine how hungry for the Word and Christian fellowship they must be to go that distance?  Can you imagine how physically hungry they must get during the long day away from home?  We strive each week to make sure that we fill them with good food to eat and a meal to take for the road, but more importantly, God is sustaining them with his Word and satisfying them spiritually around the table of Holy Communion.  God’s family from many countries at the banqueting table.  His banner over us is love!