Growing Up in the Solomons: Part 2 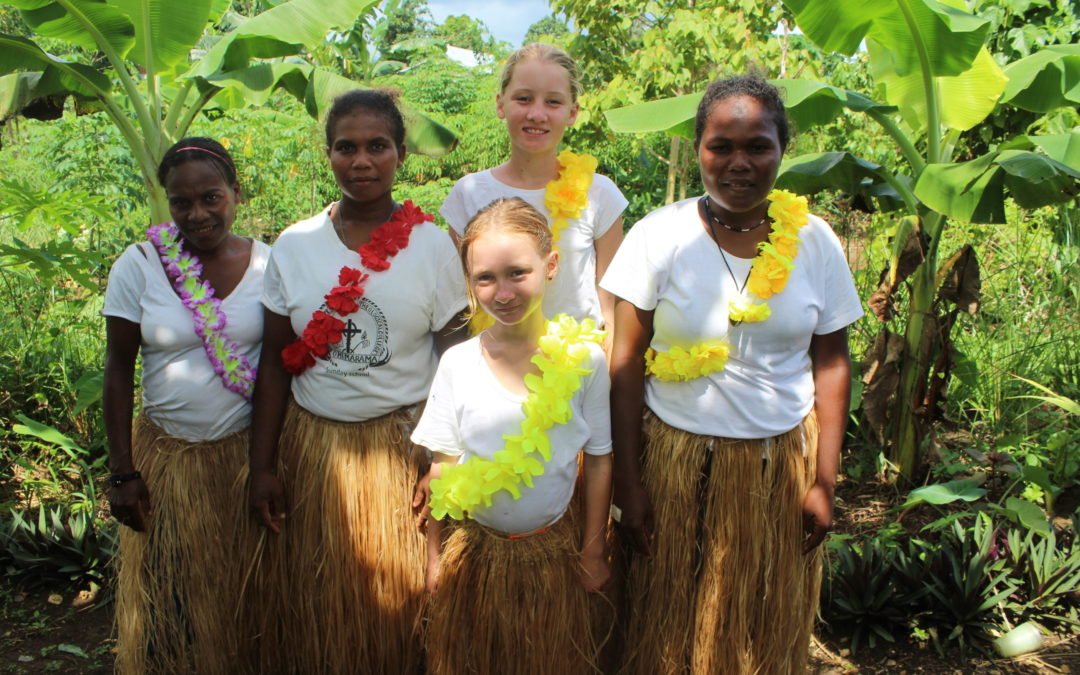 Hello! My name is Avalyn Hicks (or Ava for short). I want to tell you a little bit about my life in the Solomons. Enjoy! 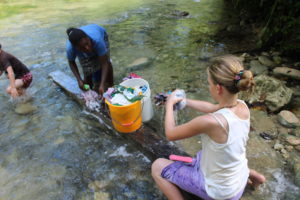 Since we don’t have a washing machine, we have to wash our clothes in the river. Sometimes I go with our house-girl, Josephine. We carry our buckets of clothes down to the river either with friends, family or by ourselves. We start by laying an article of clothing on a piece of timber. Then we sprinkle or rub soap on it. We brush the clothes, turning them front to back and inside out. After all the clothes are washed, we dip them in the water and wring them out. We place the clean clothes in a bucket and carry them back home to hang on some lines. You can use different methods: such as washing, rinsing, squeezing, and then putting the clothes in a bucket. 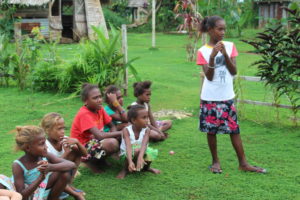 In the Solomon Islands, we dress differently than we do in America. Women and girls are more modest there than they are here (in some ways). Most women and girls wear skirts all the time. It is a sign of disrespect for young girls to wear shorts; but this is changing in the capital, the towns, but rarely in the villages. Lots of women and girls also wear short or tight skirts there, which is not very modest either. Women who are married or older in the villages sometimes don’t wear shirts, because the shirts are too hot or mothers want to nurse their babies. Men and boys wear shorts and shirts (or no shirt), but some men wear pants. Most women and girls wear buns. Men and women wear custom outfits when they dance, which means for the women bras, grass skirts, something under the grass skirts (shorts or other skirts), and the traditional shell jewelry. Men wear shorts, shell jewelry, kabilato, and paint. They shake rattles and wear nutshell-anklets: when they stomp these make noise. Women can wear shorts when they are bathing. By the way, we wear all our clothes when we bathe because bathing is public! 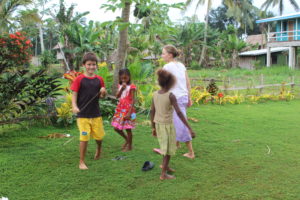 We play different games. Some are games that we play in America. Some are native to the Solomon Islands. One that we play both here and there is ball-tag or dodgeball, where you play tag, but with a ball. Another game is called: “What did you say? In!” In Pijin this sounds like: “Wat ah did iu sei? In!” This game has four lines. One is vertical, two are horizontal, and one is a perimeter line. One team says: “What did you say? In!” They jump in, and they have to be in every box, and then get back to the start before they win. (Only one person in a team needs to have been in every box to win.) The other team tries to tag anyone on the opposite side, by moving along the lines. If the tagging team tags someone on the jumping team, the tagging team gets to be the new jumping team on the next round. If the jumping team wins, they get to jump in again. Another game native to the Solomon Islands is called Sela Coconut. One team is a stacking team and the other team is a shooting team. The former tries to stack all the coconuts into a tower while the latter passes the ball to each other trying to shoot the stacking team out. If the shooting team succeeds, they get to be the stacking team on the next round. If the stacking team succeeds (and their tower manages to stay up for a count of “2, 4, 6, 8, 10”), they get to be the stacking team again.