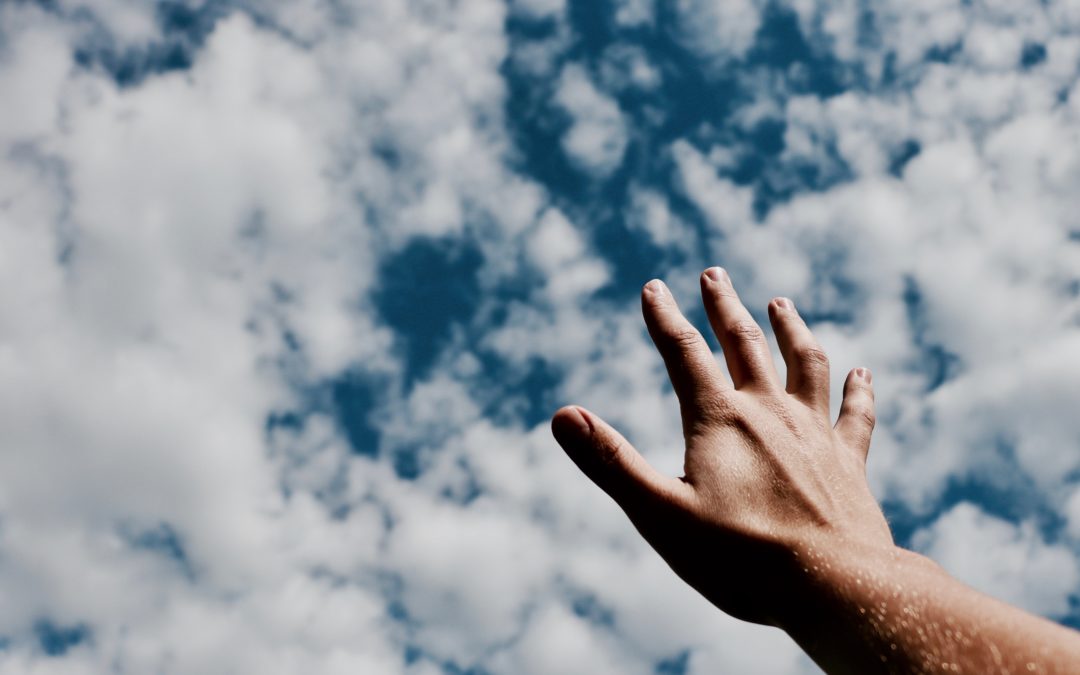 A story has been told about a man who went hiking up Table Mountain. As he was walking, the famous tablecloth descended upon him in thick, impenetrable folds – so thick he could not see where he was walking. He knew he needed to get off the mountain as quickly as possible, so he gingerly picked his way forward towards the path leading down to the parking lot below. At one point, he misjudged his step, slipped on a wet rock, and went plummeting down the cliff side. As he fell he instinctively grabbed for something that would break his fall…and to his relief, a rather large bush just happened to be growing out of the side of the mountain, and he clung on for dear life.

But he knew this relief was only temporary…he had to find a way to get his feet on firm ground so that he could scramble to safety…but he could not see anything and, try as he might, swinging back and forth with his legs, he could not feel anything. Then he felt the bush give a little…some soil and a few pebbles fell on his head. It was only a matter of time before his weight would prove to be too much for the bush’s shallow root system and his perilous descent would recommence.

So he summoned every ounce of strength left in him and cried out with the loudest voice he could muster.

“Help! Is there anyone out there? Please, help me.”

To his immense surprise, he heard a voice remarkably close by…in fact it almost sounded as if the voice was close to his ear.

“I am,” the voice replied, “Are you willing to trust me?”

“Let go of the bush,” the voice said calmly.

“Say what now?” cried the man.

“Let go of the bush,” said the voice.

“Let go of the bush? You’re kidding me, right? That’s not funny. Please, I am very scared…and I’m slipping…the bush is giving way…help me. I can’t hold on much longer, please. I don’t want to die!”

For a brief moment the man hesitated. Then he screamed: “Is there anyone else out there?”

It is interesting to me that at the very heart of Solomon’s Temple – in the holiest place – the Holy of Holies – was a box containing just three rather ordinary things. One was a simple earthenware jug filled with a flaky substance…a small sample of Manna …the other was a simple wooden staff that had once budded…and the other was a block of stone with some words carved into it. If you didn’t know what these things were, they would look very plain and ordinary…

But in the right context, these things were very precious, not necessarily because all three were miraculous, but because they each had a remarkable story to tell…the strange, unknown bread graciously provided from heaven to feed God’s people in the desert… the dried out walking stick that had miraculously sprouted buds and flowers to confirm the God-given leadership of the High Priest, Aaron, Moses’ brother…and the Ten Words of God, or the Ten Commandments as we call them, carved out of rock by the very hand of the Almighty Himself.

You see, what made these items worthy of their placement in such a hallowed space was that each one represented the trustworthiness of God’s Word in the past…and, in the belief system of the Ancient Israelites, if God had done it before, He could be trusted to do it again in the present and in the future.

Or to use the words of the great King Solomon: “Praise the Lord who has given rest to His people Israel, just as He promised. Not one word has failed of all the wonderful promises He gave through His servant Moses. May the Lord our God be with us as He was with our ancestors; may He never leave us or abandon us.”

Trust. I want you to see that this one word is key…it is central to our faith…trust. But not just a disembodied trust…it is a trust that is founded on His proven and tested Word.

When King Solomon dedicated the Temple, his focus was on the Word of the God Who had proved Himself faithful to His people and to His king. “You have kept Your promise,” he said, “You made that promise with Your own mouth, and with Your own hands You have fulfilled it today.”

Now, for a moment, I want you to put on the sandals of the disciples in Capernaum as they heard those baffling words spoken by their Rabbi, Jesus. Ready?

There you are listening – all anticipation – what is He going to say and do this time? And then you hear Him say: “Anyone who eats my flesh and drinks My blood remains in Me and I in him.” You do a double take? What was that? Eat human flesh and drink human blood? Cannibalism? Seriously? Surely that can’t be what He means, right? It has to be a metaphor…bread of life…bread of heaven…flesh and blood…this is really so hard to comprehend.

And then as you are still scratching your head, you see many other followers leaving…and they are leaving in droves!

Now, don’t judge these deserters too harshly…theologians are still arguing about the meaning of this text…during the Reformation, people lost their heads and were burned at the stake because someone did not understand what Jesus meant by “Eat my flesh and drink My blood”.

But then Jesus turns to you and says: “Are you also going to leave?”

Can you hear it? What is behind this question? “Do you trust Me?”

How did Simon Peter respond? Listen carefully to what he said. “Lord, to whom would we go? You have the WORDS that give eternal life. We believe and we know you are the Holy One of God.”

How on earth did they know?

Well, during the time they had spent with Jesus these disciples had come to believe and know first-hand that the words of Jesus were trustworthy. He had not failed them before. He had done all things well. Why then would they abandon Him when the going got tough…when things were hard to comprehend…when it seemed as if they were on the losing side?

Now, don’t get me wrong. I am not talking about fatalism. I’m not espousing a “Let go and let God – a que sera, sera attitude to life. I’m not even talking about blind faith.

No, what I am referring to is the Word of a God Who has made promises with His own mouth and has fulfilled those promises time and again. The Scriptures and history itself testifies on His behalf. What He promised He did…His Word is trustworthy…

This is one of the reasons why I love the Eucharist so much. This is a picture…a portrait of our Lord’s trustworthiness. Way back when sin first entered our world, God promised that He would send someone…the Seed of a woman, as the older translations have it…to set things right. And He did. The second Person of the Trinity…the Son of God Himself…left His glory…He set aside His majesty…so that He might take on human form to annul a penalty that was mine…to die a death that was mine…to pay a ransom that was mine…

Here at His Table, we see His Word re-enacted…performed…demonstrated…with simple and ordinary elements…bread and wine…as simple and as ordinary as an earthenware jug, a dry walking stick, and a piece of stone. But in the context of this gathering of His people, these ordinary, simple elements take on a whole new meaning…a profound meaning…a life changing meaning…here these elements tell us a story of promise and fulfilment…a story of faithfulness…a story of love…a story of trust.

So when the clouds descend upon your life as a blanket…when you simply cannot see one step ahead of yourself…when you are hanging on for dear life…when others are losing hope…when so called common sense and logic fail you…trust Him…trust His Word.

Dearest beloved brethren, place God’s Word in the most sacred space in your life…at the very centre of your existence…and allow it to be the governing force behind everything you think and do and say. Only then will you be able to trust Him…