Fr Phil had managed to book their four legs of the airplane flights in Peru from England, I wasn’t as fortunate.

As I was booking four separate airline journeys, none of which were round trip, I kept running into trouble. I had tried multiple times to book my flights from the US on the LATAM website, trying English, trying Spanish, each time after entering all the information–city to city, flight to flight, date to date; only to have my credit card rejected for no reason anyone could figure out. Hours on the computer, hours on the phone with the LATAM representative, produced no results.

So when I arrive in Peru, I try again to book my own tickets online figuring that now I was in Peru, maybe that was the problem. Nope. This means a trip to the airline office; thank goodness it is in the same district that I’m in so it will take only about 15 minutes to get there and a one sol bus ride (about 35¢.) I explain the situation to Paola, who plugs in all four legs of my journey, only to come up with a cost that is almost 50% higher than what I had been quoted on the website! I decide not to buy the ticket that day, but go back and see what my husband John gets on his computer.

John checks his computer and gets the same price I had gotten before, sends me a photo of the computer screen and I go back to the office the next day and show Paola. The problem is that LATAM changed their pricing schedule. I”m not eligible for that price now. They have four columns, but now foreigners can buy only the most expensive tickets, not the next cheaper level down and the website was showing the wrong level for me as a foreigner. I buy the expensive tickets. No choice.

In the meantime, I warn Deborah (the unexpected visitor) by e-mail to expect a hefty cost for her airline tickets. Phil has sent her the itinerary that we will follow. She is in Andorra and contacts her husband in Spain to see what he can get. In the end, she asks me to get them as he ended up going through the same things. So back to the airline ticket office again the next day. Praise God we all have tickets on the same flights! Now to deal with the buses!

As many of you know from the January e-newsletter, I (Susan) am spending the month of February in Peru helping/shepherding various people from different parts of the world as we go around the country.

Saga of the Cellphone–

A cell phone is an essential piece of communication in Peru. Everyone has one, texting is cheap, you don’t get charged if someone calls you, and you can keep receiving calls even when you don’t have any money in the phone. Knowing we would be traveling all over and that I would need it, I went to get “THE CHIP”

In the past, it was easy to get a chip for an unlocked cellphone-merely go to the local supermarket, go to the kiosk, pay $5 and get a chip which you then put into the phone. I started the journey with this in mind.

Feb 2--At the local supermarket, the Movistar kiosk. “I want to buy a chip, please.”

“Do  you have your national identity card?”

“I have my passport.”

“Oh miss I’m sorry, all passport and foreign residents have to go to the main office to buy a chip now.”

So I ask at the Claro kiosk–same thing. And at the Entel kiosk–same thing. It turns out that due to people buying chips and passing them to prisoners in jails, now any foreigner has to go to the main offices to get a chip. I resign myself to tackle the chip tomorrow knowing that it could take several hours.

Feb 3--As I was not sure of which bus route the main office was on, I took a taxi (thank goodness, they are relatively inexpensive.) However, the address the man at the kiosk gave me was the wrong street number. Since it was the right street and the building obviously said Movistar, I decided to chance it.

Get my number, wait my turn, sat down with a nice young woman who took my passport and copied my data into the computer and filled out all the paper work of where was I staying while I was in Peru. (Thank goodness, I could use the cathedral as my address and phone number) Sign four pages, fingerprint all four pages, initial spaces, check boxes, etc. Each time I double check. “I will be able to use the phone when I have the chip, right?”

She gave me a paper with my new cell phone number on it and directed me to another line in the next building over where I could pay S/. 8 for the chip. Wait in that line. They have no change for a S/. 10 note (a three-story business with hundreds of people making transactions every day and no change??). So I scrounge around and dig up S/. 8 in bits of coins hiding in my bag. Get a receipt and am directed to yet another counter in front of what looks like a storage closet where there is no one. I stand around for several minutes, start making coughing noises to try to attract someone’s attention. Eventually a young man appears, gets a chip and puts it in the phone. Now back to the supermarket to put money in the phone.

Recognizing vaguely where I am from having ridden the bus past the shops there, I proceed to walk a few blocks in the direction I see buses going looking for a bus stop. They are not all marked, so I kind of look for a group of people standing around staring down the street. Hop on the bus and head for the supermarket to put some money on the phone chip.

At the supermarket, I buy S/. 20 figuring that would last me a fair amount of time. Head back to the cathedral. That night I try to use the phone. There is a rush of Spanish when I dial a number, none of which I understood. The screen says, “SIM registration failed.” After trying to dial four times, I began to realize that the phone was not going to work and that I needed to do something else, but still wasn’t quite sure of what. I tried following the directions to no avail. Tomorrow. . . .

Feb 4–Back to the kiosk. “Sir, The phone is telling me I have to do something, but I don’t understand what it is.” He listens, tries the same thing. Nothing.

“I’m sorry, you have to go to the main office.” “Can I send someone else to do it with a note giving permission?” “No.” AARRGGH!

It is Saturday and it will not be open on Saturday or Sunday. I have to wait until Tuesday. Monday I have to be at the airport (a trip of at about an hour) at 7 am to pick up the Bishop of Springfield, IL and his link person. I realize that there won’t be enough time between the early morning pick up and the one that is coming in at 7 that evening (which will take much longer to get to the airport because it is rush hour) as there are other preparations to do.

Feb 7–Off to Movistar main office after the bishop’s meeting. Explain to the ticket woman, take my number, wait much longer this time, talk to another person who enters my birthdate into the computer. “That’s it.” “Let me try it.” I call the cathedral–super fast busy signal which means it didn’t go through.  Next try–“I”m sorry the number you dialed does not exist.” (um, yes it does) another try, another super fast busy. “Try turning it off and back on.” I do so. Still no luck, so he takes the phone and tries it. Nope.

“Do you have money in the phone?” I pull out the receipt showing I have. Puts more data into his computer, talks to the guy next to him, calls someone on the phone, more computer, and repeat all of the above. “It seems they haven’t registered your money to your account yet.” “But it was days ago!” “Well it will take about an hour.” I don’t have another hour to wait at the office to see if it works. “If it doesn’t work, can I send someone else to take care of it?” “Oh yes” “Give me your name so I can tell that person to talk to  you.” I get a ticket with him module number on it and head back to the cathedral.

I stop in the grocery store to pick up a few things, pull out the cell phone to get a number only to see that the screen still says, “SIM registration failed.” 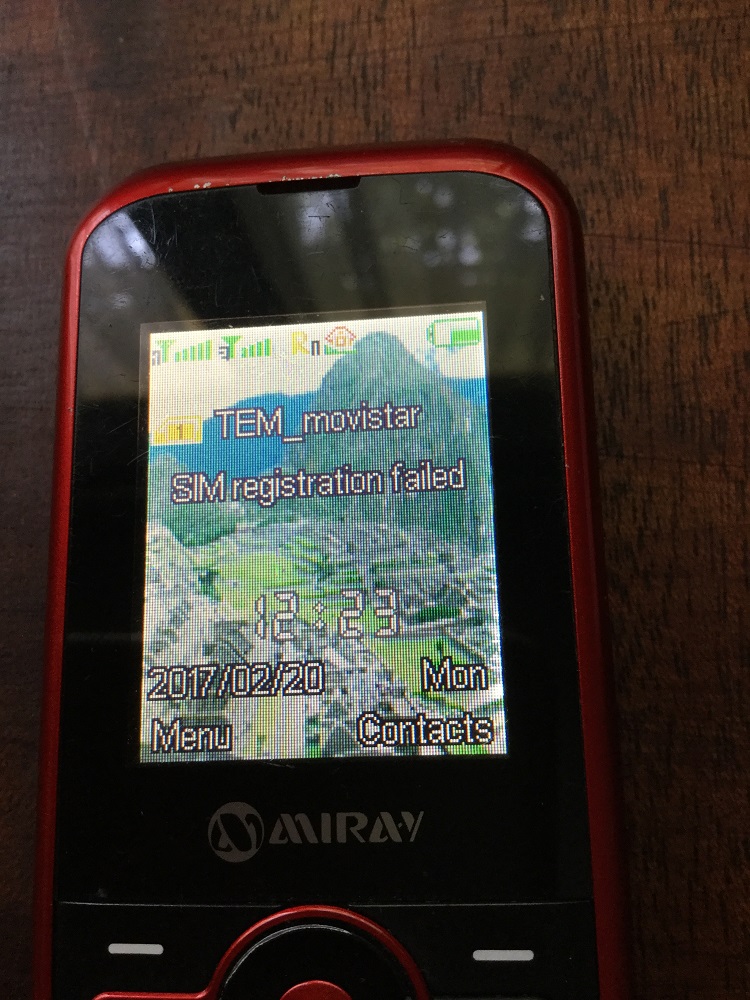