We left Cape Town International Airport three hours later than scheduled. Ethiopian Airlines at their best. Consequently, the transfer at Bole International Airport in Addis was rather interesting…we had to apply for a visa, claim our bags, and walk around to the Domestic Airport as there were no transfer vehicles available at that hour…only to be told that we could not proceed to the waiting area by the only security person in the building…and there was no where to sit there other than the floor. After speaking to one of the Ethiopian Airlines check-in people and explaining that we had a connection to make, the security person let us through. But we still had a very long wait for the plane to Gambela and not a coffee bar in sight.
When we finally arrived at Gambela airport, our ride was late. She had lost her spectacles and after she found them, she got stuck in the mud as she tried to leave her compound. Ah, the simple life in Gambela.
We were greeted like long lost family…folks started coming to greet us with gifts of eggs, aubergines, a chicken, cold fizzy drinks, a beaded gourd, and other food items…and our students came to love on us, hugging us, holding us, and calling us their mother and father. Louise wept like a child.

The next morning I preached at St. Baranabas. There was much rejoicing…singing and dancing…oh, how we have missed our Anuak family, but boy were we exhausted after the (long) service!

The following day, we started to train trainers in how to make disciples. All the students, first through third years, were present together with priests and lay leaders who lived close-by.

It was such a blessing to be back in the classroom…to be with the folks we love so dearly…to share with them the wonderful material we have discovered since being absent from them. Ah, the Lord is good.

Then the great event itself! The first graduation of St Frumentius’ Anglican College! Our babies were graduating. What an emotional roller coaster for us all. This was what we gave our lives for…and nearly lost my life for…but ever drop of sweat, every struggle, was well worth it.

The training continued until Friday. 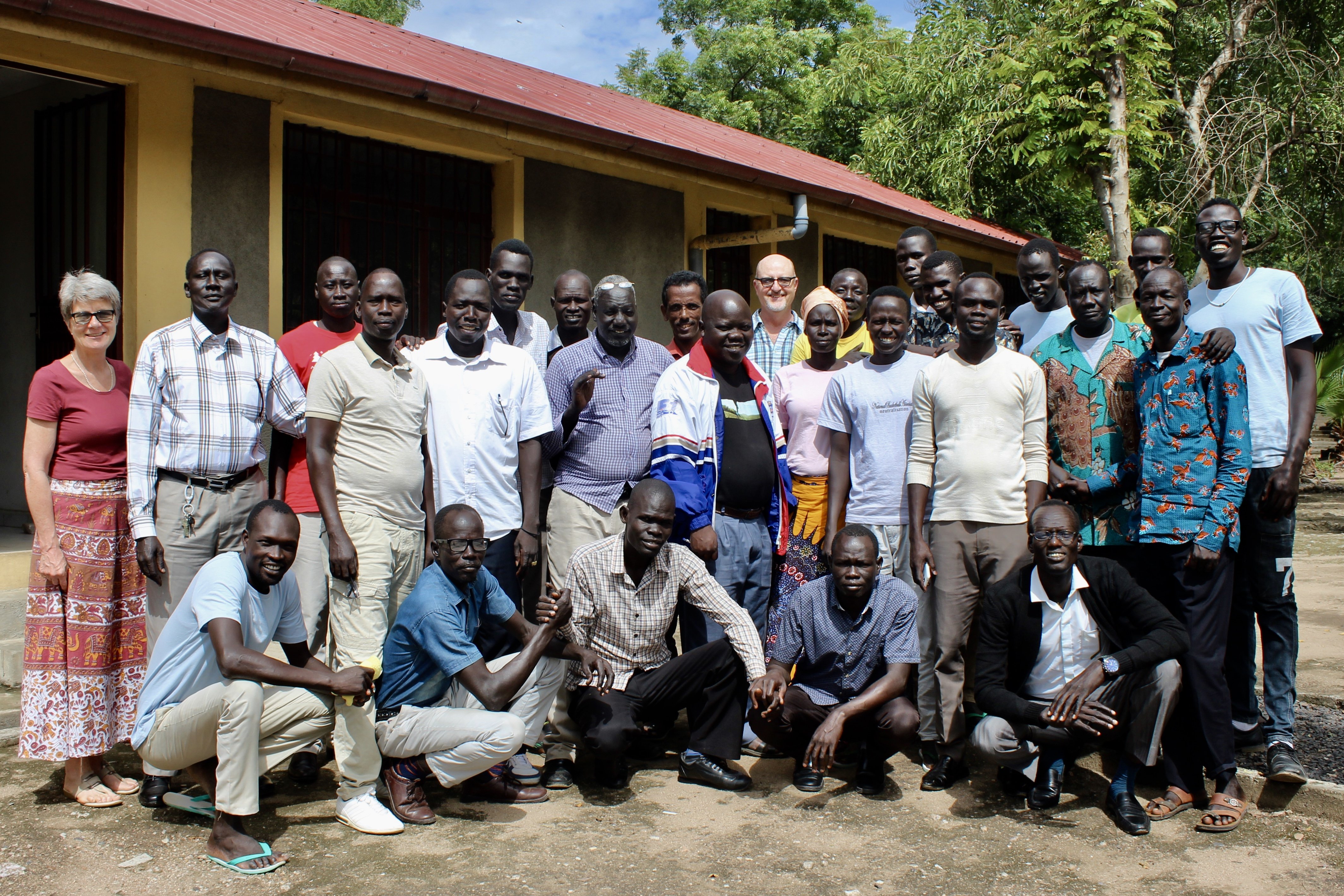 Here we are with most of our students.

I had also blessed a tribal marriage in the meantime…a first for me. The English teacher had also joined us and we spent Saturday getting to know each other. What a wonderful retired missionary still giving her all for our Lord and His kingdom! Sunday, I preached at St Luke’s, a Nuer congregation. Again, many tears and much laughter. We left for Cairo that afternoon.

Our flight to Cairo was late as well…for someone who is a stickler for punctuality, this is a bit of a bother. When we arrived, we could not locate our ride to the Diocesan Guest House. We waited an hour as we did not want anyone to miss us, but finally gave in a took a taxi. Just as well…we found out the next day that the driver had got the days wrong! Driving in Cairo at three AM is interesting. This city really does not sleep!

We met up with our dear friends from South Carolina, now serving with SAMS with us at the Cathedral, Kerry and Cynthia Buttram. We had two full days with them before starting the disciple making training on Wednesday. Bishop Mouneer was present throughout the training…only the second bishop to show such interest and solidarity with his priests! We had a marvellous time and they were so thrilled with the material! Pray for them, as this is a very difficult area in which to live as followers of Jesus!

Cairo airport was quite an adventure, to say the least. Going through security with a pacemaker can be rather interesting when no one understands what you are trying to say. But the most, dare I say, entertaining part was when a fight broke out in the security line as we were about to board the plane. A woman was attempting to knock a man senseless with her shoe. I don’t know what he did to her, but it must have been pretty bad for her to lose it like that. Needless to say, we were delayed once again.
Our stop in Addis was wonderful. We spent time with very dear friends, CMS Missionaries, Roger and Lynn Kay. They went out of their way to spoil us rotten.

Louise with Lynn and Roger at Cape Point earlier this year.

We also got an opportunity to say farewell to Rosemary Burke, also with CMS, as she returns to England to wait on the Lord for her next assignment.
Our plane bound for Cape Town…wait for it…was delayed as well. But adding insult to injury, when we arrived in Cape Town, our bags were not with us on the plane. There were quite a number of very disgruntled fellow passengers, especially those with connecting flights! But, I must say, they did get our bags to us in Villiersdorp the very next day…actually just before midnight. So, alls well that ends well.

We are back home now, trying to catch up with emails and life in general. A dear family friend was killed shortly after we got home in a car accident. We are all still in a state of shock as he was so young and leaves behind his young wife and two beautiful daughters. Please keep them in your prayers as they try to move forward.

Thank you once again for your love, encouragement, and support. Thank you for being our partners in the Gospel!