Gauteng, Swaziland, and Beyond! Day Fourteen.

Today was a day of rest. While we could not
exactly avoid driving altogether, we did not have any set agenda or anywhere to
be at any specific time or any people to meet. Just God’s stunning creation and
us.
We started with the B & B manager
telling us off in a rather gruff tone as it appears we left the electric gage
open after we returned from dinner last night. Apparently, the police woke him
up at 3 AM. Oops. The gate does not close by itself after entry, so if you
neglect to press the button again, it stays open. Sigh. We forgot. Everyone
here lives behind high walls, razor wire fencing, and security gates with
alarms and constant police surveillance. This is in stark contrast with
Swaziland where there is no crime or poverty visible…at least to visitors.
As I had said earlier, I was in this area
40 years ago and a lot has changed…some for the better and some…well, let’s
just say there is a lot of neglect. Some roads are well kept while others are
full of potholes.

We did a round trip of the area today…not
much driving, but a fair bit of walking to see various sites. Our first stop
was Pilgrim’s Rest…a beautiful historic town still very much like it was in the
late 1800’s during the gold rush. Sadly, things have gone downhill since I was
here, but it is still worth visiting. The old Royal Hotel is pricey, but
gorgeous inside. Lords and Ladies frequented this place back then, as did
commoners and fortune seekers.

The old graveyard is interesting. One grave
is that of a robber…while all the other graves face East…towards the rising
sun…his faces north. Hmm…no hope for him in the resurrection?
An unemployed
gentleman washed our car for us while we were out walking through the streets
of yesteryear…we hadn’t asked, but he needs the money for his family. So many
people without jobs here…again, this is in stark contrast with Swaziland.
From there we drove through the most
beautiful scenery imaginable…it is hard to describe the grandeur of the
mountains as one weaves ones way over the pass…The Robber’s Pass…apparently two
stage coaches were robbed here. We hoped this would not be our lot today…or any
other day for that matter!
We saw another marker marking the many
paths Jock of the Bushveld walked with his master Sir Percy Fitzpatrick. (See
here: http://www.graskop.co.za/jock/)
There was a herb nursery close by so we stopped in to look…and walked out with
a curry tree. Let’s hope it survives the rest of the trip.

From there we headed north. We drove past
lush farmland…orange trees and sugar cane galore. We saw an interesting Big
Shoe and stopped to take a photograph and buy a cold drink. Interesting folks
in that shop…reminded me of the Stepford Wives or something like that. Then
we turned back East to the Blyde River Canyon…again vistas that take your
breath away.

Our first stop was the Three Rondawels…mountains shaped like round
huts. Spectacular. Next on the map was Burke’s Luck Potholes…natural and in a
river, not the tarred roads. Stunning. Then we stopped for lunch…in the middle
of nowhere, there is a restaurant called Potluck Bush Kitchen, situated on the
Treur (Dutch for Mourn) River…nowhere in the world is there anything to beat
this ambiance and view. 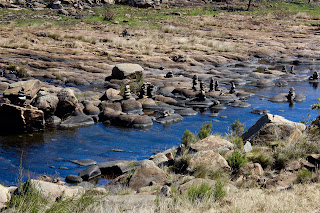 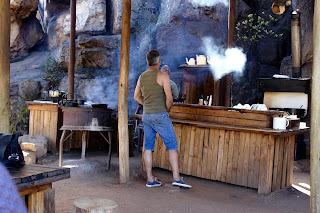 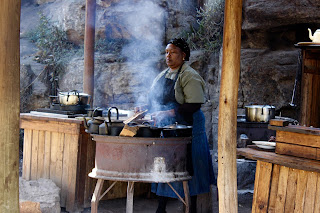 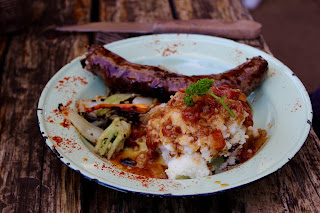 We went for a short hike along the river after lunch
just to let it all settle before hitting the road again.
On to Wonderview, God’s Window, and The
Pinnacle…a lot of walking up steep stairs, but the view was well worth the
effort. I’m not sure my knees agree, but we will chat again tomorrow. 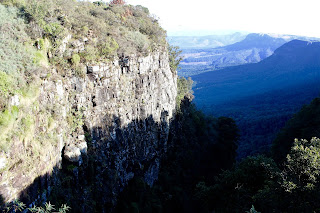 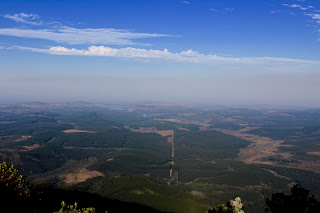 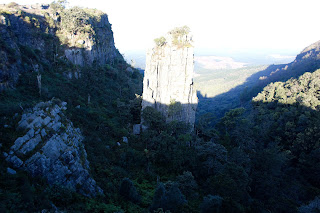 This was a good rest and we are ready to
take on the next part of our journey tomorrow. A lot of driving first…