Trip to the Eastern Cape: Day 11

We had quite an early start today as we had quite a way to drive! But…we didn’t take into consideration how long we would have to wait at roadblocks…the particular road we travelled on today was under construction – all the way! The only thing worse than sitting waiting for the STOP sign to turn to GO is doing the job itself…it must be brain numbing to stand hour after hour waving a red flag to unsympathetic motorists or turning a sign over or pulling the plastic roadblock out of the way. We always greet everyone with a wave and a smile and they respond with the same every time.

As we have been going non stop since leaving Cape Town, we rewarded ourselves by taking the day off today. So we headed down memory lane, stopping off at another mission my great-grandfather had on his list. Dortrecht. The church in which he served as Rector is now in a sad state of disrepair…but the rest of the town doesn’t look all that hot either. Sad, really.

Next, we headed off towards Molteno, a tiny town in the Eastern Cape where Louise’s Dutch ancestors were friends with my British ancestors three generations ago. At the time, the British and Boers were not that happy with each other and a huge battle was fought right on Louise’s grandfather’s farm, Klipfontein.

Old man van Zyl thought thieves were trying to steal his sheep so he let rip with his rifle…unbeknownst to him, the trespassers were British soldiers trying to get some sleep in his barn – their mistake was that they didn’t ask his permission first. When they heard the gun shots, they thought they were surrounded by Boer soldiers and they ran for the hills. In the end, it was a Boer victory, so maybe Old man van Zyl could take a pat on the back.

Louise’s father was also born in Molteno in a small house just off main street – because there was no hospital back then. He also went to school here and ought to have inherited one of Old Man van Zyl’s farms, but…well, it is a long and convoluted family story. There were coal mines here at one time, but after the war, they discovered that the grade of coal was inferior, so they closed the mines…the town had a brief boom period, but it quickly declined as residents left seeking their fortunes elsewhere. 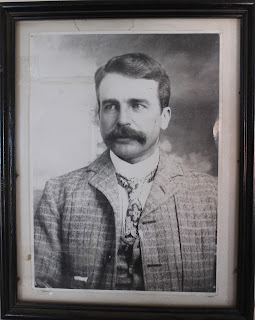 One such resident was my great-uncle Ambrose Lomax. Ambrose was a chemist and amateur photographer. We visited his old shop today which has been converted into a Magistrate’s Court, a library and a wee museum. In the museum we saw a photograph – a self-portrait – of Ambrose as well as a newspaper from April 1910 in which my grandfather is listed as having won a tennis match. My great-grandfather, Arthur, died in December 1910…I wonder if he was present when his son won this match?

We did visit the grave sites of both my great-grandfather and my great-grandmother Mary Ellen as well as Louise’s father’s grave…the former in Steynsburg, the latter in Molteno. Always strange visiting grave sites and wishing one could somehow tell them what is happening in our lives and hear what they had to say about that…maybe that is better left unsaid and unheard. 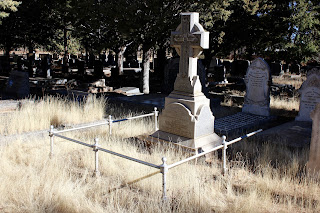 Tonight we are staying over in a lovely Guest house called Olive’s Cottage. On our way today, we received a call from the owner to say her husband had had a heart attack and they were in East London – he was having emergency heart surgery…but we could still get into the Cottage via a kind neighbour. We told her we would be praying and we called her just a wee while ago to hear how he is doing. Apparently everything went well…he is in recovery. Thank You Jesus.

Tomorrow is going to be a long day. From Molteno we drive to Queenstown to meet with the coordinator of GtC in the Kahlamba Diocese. We meet him at 8 AM…so we will have to leave a freezing (literally) Molteno no later than 7 AM. Then on to East London for two meetings at St Mark’s Cambridge, the first at 12H30 and the second at 17H30. So, it is an early night again tonight for us!