Trip to the Eastern Cape: Day 10

Close your eyes…you might just think you
are in Cambridge or Westminster or King’s College…but no, wait! The words are
not English, but Xhosa. Open your eyes and you are looking at roughly 5000
people crammed into a tent. I think to myself: “My great-grandfather did not
build churches. These people. They are his legacy.” According to the SPG in
London, Arthur was here to train indigenous missionaries…indigenous…that’s what
this church is now. While it is a perfectly sound Anglican service, it is all
done in isiXhosa…the Prayer Book, the Scripture readings, the Hymns, the
service music…and all are indigenous people. Just the way Arthur would have
wanted it to be.
We were told to be at the church at 8:30
AM, but by the time we got there crowds were already singing lustily in the
tent…cars parked everywhere…and wave after wave of procession marching up the
street from Ebenezer to the tent. I was there just in time for the very last
one…with all the Canons, Archdeacons, the Provost and the Vicar General. Eish!
Whatever happened to Africa time? 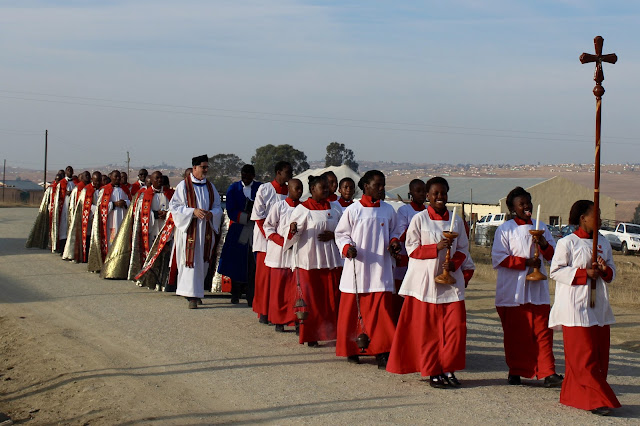 I walked alongside the Chancellor of the
Diocese…a good man to know! He and I chatted about the LEAD program and he is
sold. One more on our side! Thank You Jesus! The tent was actually overflowing
when we processed in and more people kept arriving throughout the service. As
guess I managed to get a seat on the stage because I was with this final
procession…it helps being late sometimes!
The service was amazingly organized. The
choir was magnificent. As I said to one of the Archdeacons, today even the
angels were silent. I hope I can buy one of their CD’s as I would love to hear
these spectacular voices again. As neither Louise nor I speak or understand
Xhosa, we were at somewhat of a disadvantage, but one of the great things about
the Prayer Book is that even though it is in a different language, one can
figure out what is going on from time to time. 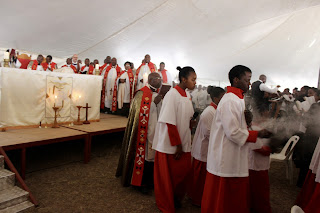 These chaps do like their incense, though!
The acolytes were so well trained and to watch them…their serious little faces…was
a treat. The Eucharist is probably the largest I have ever attended with
Chalices and Patens galore…the Vicar General kindly asked me to serve the bread
– I loved every moment of it. Every man bows and every women curtseys as they
receive the elements in upraised palms…precious brothers and sisters. 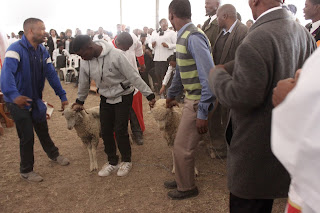 As this is a “Family Day” celebration
service and everyone from the Diocese is present, there were reports to be given
and gifts to be received. From the entrance of the church came the loud sound
of dancing and singing as a group of enthusiastic young folk dragged in two
sheep…a ram and ewe. As we did not understand what was being said or sung, we
wondered…independently as we were not seated together…what was going down. Was
this some OT scapegoat type ritual? The sheep were shoved onto the stage and
made to sit at the feet of the Vicar General. My curiosity took over and I
asked the Archdeacon next to me what was going on. He told me they were gifts
from the Diocese to the Vicar General as a token of their appreciation. He was
told that this was the start of a flock for him and his family…not to eat, but
to multiply. They gave him an envelope with money for food…just to make sure.
Sweet. 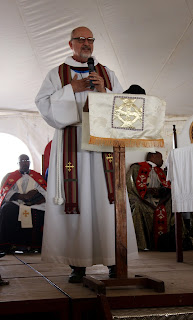 Then came my turn to address the crowd. I
had prayed fervently that the Lord would give me the right words. Of course, at
gatherings like these, there are many to address prior to saying anything…the
Vicar General, the Provost, the Canon, the Archdeacons…and so on. But when I
spoke, I told them what a blessing it was for us to be here on their family day
as I am part of their family in a sense. I then told them about Arthur being
the first principal of St John’s College…at this point people applauded and
cheered. I had wondered how they would react, but it was very positive indeed.
I told them all about GtC and the LEAD program and that I would be meeting with
their Vicar General to discuss dates, times, and venues. The expectation is
palpable…they want this training.
It was all over too soon…then there was
lunch. Lunch? No, a feast worthy of the word celebration. Chicken, beef, lamb,
rice, samp, butternut squash, spinach, salad, and dessert…these folks can eat!
When it was time to say goodbye, the Vicar General said he would see us before
nightfall…

And, in spite of an unbelievably busy
schedule, he did! We had a wonderful chat over some light treats – who could
eat anything heavy after today’s lunch? He is going to check on the Diocesan
calendar, but is tentatively thinking of having us come up to do the first part
of the training in October. Whoohoo!!!! We may be able to get some folk from
the other Diocese to join in the fun too!