Trip to the Eastern Cape: Day 9

I have been through several storms in my
life. To me the most exciting part of nature’s show of power is the
anticipation…what some have called the calm before the storm. That is what
today has felt like to me. While many around us have laboured long and hard for
the “Family Celebration” service that will take place tomorrow, we have been
spectators…watching…waiting…wondering…
We had heard last evening that we were in
the wrong accommodation. The Diocesan Secretary had made provision for us in
the Diocesan Guest House, but he had told no one prior to his leaving for East
London. Once he returned, we had to move.
On the way over, we first fetched Bulie and
took her with us. She was going to serve as our guide and principal
“introducer”…a job she did very well, I must say. On the way we stopped to see
the Cathedral Church of Mthatha, thinking that Arthur might have served there,
but it was only built in 1901 and the Lomaxes lived in Steynsburg at that time.
We then went on to our new temporary home…
For us, this was a very good move as we are now close to the Vicar General’s and the Provost’s homes and…get this…we are a short walk from the first church built in Mthatha as well as the first school. While there is still no obvious clue to Arthur’s presence here…no plaques bearing his name or anything like that, St John’s church and St John’s College stand as a testimony to his dedication to seeing local missionaries raised up to serve their own people. Rather progressive for his time. 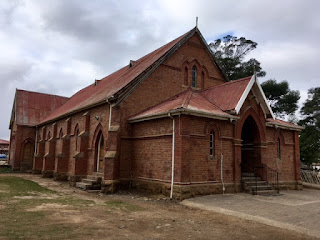 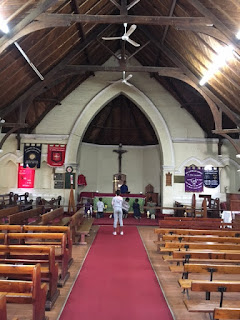 Bulie introduced us to the Diocesan
Secretary at the Guest House and we chatted about the LEAD program. Everyone is
hungry for teaching on disciple making…and he is no different. Lord, please,
lead on! Bulie served at Ugie at St. Barnabas…a gorgeous, well-maintained
church. Then she was posted to where she is now. It is not exactly a rural area
as it borders on Mthatha, but it is a far cry from the picturesque place she
was before! 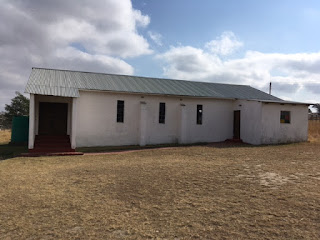 She told us a story of when the great storm
of early this year raged through Mthatha. That day, many churches in the area
lost their roofs…but Bulie stood her ground in the church building praying: “Oh
God! Your people here have nothing…spare them the expense of having to rebuild
this church!” And the Lord hearkened to her prayer…in spite of the fact that
the church is poorly built and rickety at best, it is still there as testimony
of God’s grace and mercy.
After we had moved our belongings into the
Guest House, we went to check out the place were the celebration is to be held.
A super tent on a hillside, strategically chosen to send the shockwaves of the
Gospel sung and preached into the valley and up the hill beyond. The topography
serves as a natural amphitheatre. 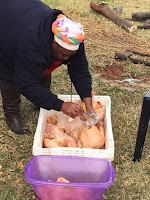 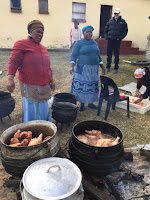 The area is a hive of activity…the women of
the church have been slaughtering chickens…23 per parish, so well over a
100…but these are no regular chickens! They are huge…Louise estimates each one
weighs about 6 pounds!
Huge black, three-legged pots dot the Ebenezer church
grounds and everywhere women, gathered in huddles, sat peeling potatoes and
carrots, while other were chopping away at what would go into the pots with the
chickens. It will be a feast, believe me! 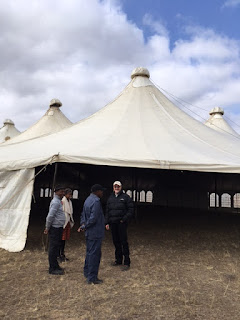 While there, we met with a Canon and
several Archdeacons. One of the Archdeacons took us to the tent where we prayed
for the service tomorrow. I plead the blood of Jesus wherever I go…the blood
that speaks better things than that of Abel…the blood of reconciliation that
alone can wipe away the ancestral call for vengeance…that alone can bring
reconciliation and peace between God and Man and Man and Man. We asked the Holy
Spirit to begin His work now already, preparing each soul who will hear the
messages tomorrow, including those who will bring them.
We…as I said before…are all anticipation.
The calm before the storm. 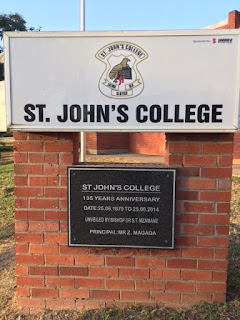 The rest of the day has been fairly quiet.
Louise has caught up on laundry. We walked about the grounds…visited St John’s
Church and looked at the land where Arthur must have taught. There are new
buildings now, as the original buildings were no doubt mud brick buildings, but
a plaque at the entrance confirmed that this was the College started in 1879…strangely
the same year Arthur was sent on to take over the school and church in
Southwell. My only guess is that he served as a pioneer and once his job was
done, he moved on to the next. The SPG Office in London said that he was the
first headmaster here, but that he trained local missionaries, not children. So
did he raise up local teachers and leadership to do the work of the ministry? Were
Arthur and Mary Ellen trainers of disciple-makers…like us?