Louise and I boarded flight 110 to
Johannesburg on June 8 together with our newfound friend and mentor, Jeremy
Koeries of J-Life. We were heading back to Johannesburg to follow-up with those
we trained the beginning of May as well as to train a new batch of trainers. 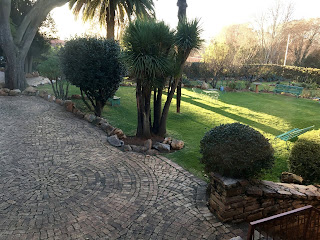 We stayed in a lovely Convent by the Name
of Koinonia, in an area known as Bezuidenhout Valley.
The training, however,
took place in an area known as Sophiatown….one of the oldest racially mixed
communities in Johannesburg which was destroyed in 1955 when over 2000
policemen forcibly moved people to different areas according to their ethnicity.
Almost all the buildings were demolished, but the suburb was rebuilt, renamed
Tromf (Triumph) and zoned as a whites only area, until the name Sophiatown was
reinstated in 2006. The training centre itself was one of the few structures
not destroyed by the bulldozers. It used to be an orphanage, but is now the
Diocesan Headquarters for the Diocese of Johannesburg. Sophiatown was also home
to the much loved and respected anti-apartheid activist, Father Trevor
Huddleston. Jeremy, Louise, and I managed to visit a centre named in his honour
as well as the church he shepherded and where his ashes have been buried.

On Friday, 9 June, John Abrahamse, the
international director of J-Life, met with our May group for follow-up to see
how they had used the material they had learned previously. He also wanted to
show them how to coach their own disciples and how to teach others to coach
their disciples. All the training materials are designed to create a
multiplication effect in the Parishes, Dioceses, and the Province. To quote the
Apostle Paul, we seek to train those who “will be able to teach others also” (2
Timothy 2:2) until every member of the Anglican Church in Southern Africa has
been trained or equipped to do the work of the ministry.

Unfortunately, as it
was held on a working day, a number could not participate, but we have
encouraged them to form small support groups among themselves and to teach and
coach each other as well as to hold each other accountable. The J-Life leaders
have also graciously made themselves available should our faculty or teams need
assistance.

On Saturday, 10 June, we started training a new group, made up of representatives from the Diocese of Johannesburg and the Diocese of the Highveldt. Some will become Growing the Church Faculty for their respective Diocese, while others will become Diocesan Team Leaders who will serve to train Parish leaders who, in turn will train parishioners.

We returned from Johannesburg on BA flight
6407 on Sunday, 11 June, tired, but joyful. It was a wonderful training event
that we will remember for a very long time.
God Bless Africa,
Guard her children,
Guide her leaders,
And give her peace.