A Walk Through Our Neighborhood–Lat Krabang

We considered “our neighborhood” to be be the area which was walk-able distance from our lodging. Looking back through these pictures of our neighborhood already makes me feel a little sad that we will probably never again see these streets which became so familiar to us during the five weeks we were there.    Once again I must say we are very happy that we had the chance to experience this very different place in the world and meet the people there.

Typical students in their uniforms walking down our street. 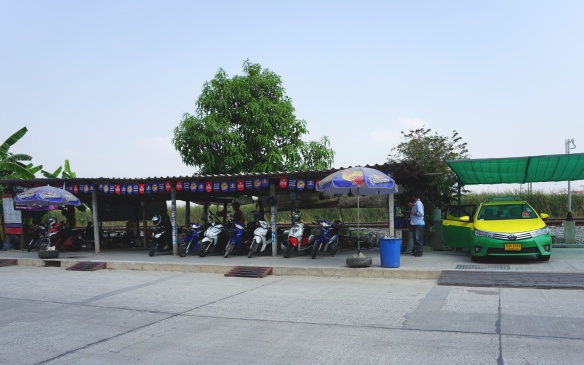 At the end of the street is this place where you can grab a ride on a motor scooter or, occasionally, a cab.  One day Chuck and I took a motor scooter to church together.  It was just a bit harrowing, especially when our driver was going against the traffic (which is very heavy here no matter where you are) and when we went over this little pedestrian/scooter bridge pictured below.  Whee! Wish we had a picture but we were busy holding on.

The 7 Eleven dogs.  These two were always lying in front of the doors to the 7 Eleven.  They found a way to beat the heat this way as whenever anyone went in or out, a blast of the very cool air conditioned air would come out.  I fed them scraps sometimes although they were not starving and one wore a collar.  At another 7 Eleven across the street from our church there were two other dogs (also 1 black, 1 brown) who had discovered the same way to keep cool. 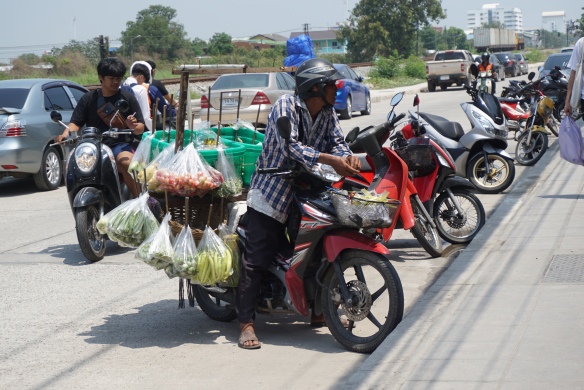 Here’s the guy who supplies the fruits and vegetables to the food stands along the streets.  There is always an array of fresh fruit and Chuck and I often bought some for our breakfast the next day.

I’m amazed he can balance his scooter with all this hanging from it.

We referred to this woman as “the chicken lady” although she also cooked fish at her little street-side grill.  Chuck always stopped to greet her on his morning walks (which I did not do because of the oppressive heat–I only walked when there was something I really wanted to see as when we were touring.)

Chicken Lady’s “kitchen” up the stairs.  We ate here (at the one and only table)  one day–just chicken, no sides, and no drinks.  When we wanted a Coke they went next door to purchase one for us.

We discovered this place the last week and ate there four times.  It was almost like home.  They had a wonderful pepper gravy on either steak or pork chops.  Very tasty.

The sweet waitress (owner) of Steak For U.

My lunch.  It looked so good after eating mostly Thai dishes for weeks.  It was more expensive though–Pork chop -$2.99 and t-bone  steak  $ 5.07 – the most expensive item on their menu.  We usually spent about $ 4 total  for lunch for both of us with drinks in the Thai restaurant on the ground floor of our dormitory. 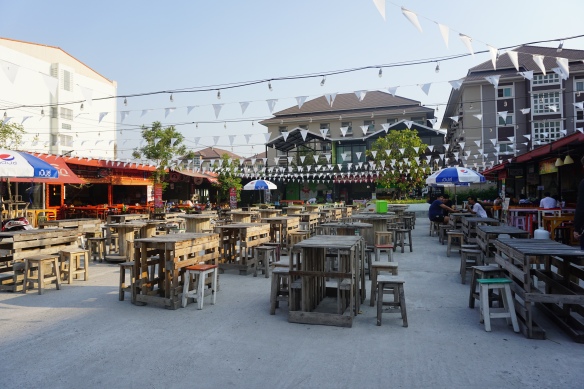 This open-air food court was just around the corner from us.  In the evenings, the little “restaurants” around the perimeter would begin cooking and the tables would fill with mostly students. 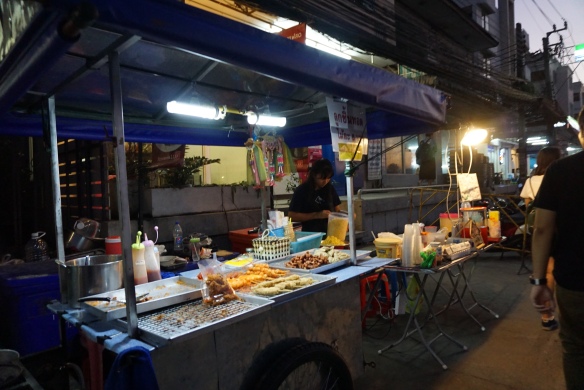 Along the street in the evenings.  Time to eat.

A couple of blocks up the street was a side street where fish were trucked in and prepared for sale.  Notice temple in the background. 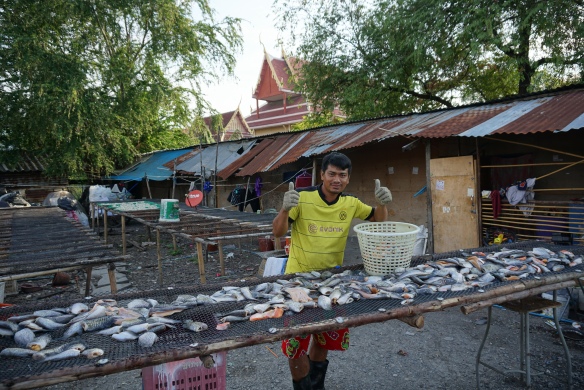 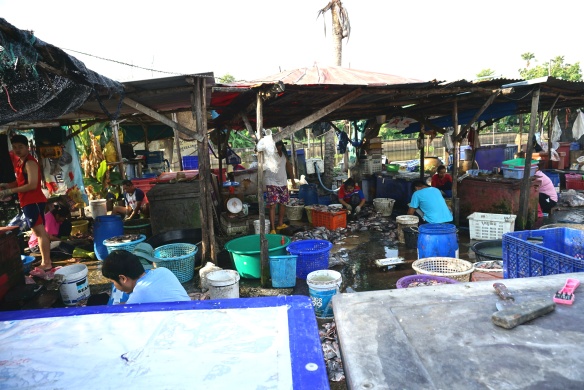 Along the streets were several micro-businesses such as laundromats, usually with 2 or 3 washers and no dryers. People dry their clothes outside on their balconies (as we did) or right on the street.  Across from us was a small hotel where you could stay for $15 a night.  There were tiny drug stores, internet cafes, and sewing shops.  Everywhere the Thais seemed an industrious people always working hard.