Ghost Houses: May The Spirits Be With You

One of the distinctive features Bonnie and I notice wherever we travel is the influence of religious beliefs and practices on the architecture and adornments of the society.  It doesn’t take a genius to figure out whether you’re in a Christian, Muslim, or some other type of society.  Thailand, for instance, represents a religious blend of Buddhism, Hinduism, and animism.  Of course, explicitly religious buildings reflect these various influences but what I’m referring to here is not only temples, mosques, churches, etc.  Representations of Buddha and many Hindu gods and goddesses may be found outside temple precincts.   Animism, however, at least as far as we can tell, is not represented by dedicated buildings as it by  ghost houses found near many homes, apartments, and businesses.

Animism is a belief, and it is a very ancient one, that inanimate objects are imbued with some sort of soul or spirit and, therefore, have the power to harm or bless those who treat these spirits either neglectfully or reverently.  As an example,  one must not step on the threshold of a house because the spirit of the house is thought to reside there and to step on that spirit with  the very shameful and disgusting bottom of one’s foot is not to be done.  For the culturally unaware sometimes signs are posted reminding you of this taboo.  Aside from the spirit of the threshold, many other spirits are found in and around the house, building, business or whatever.  Spirits, like anyone else, need a place to live and one suspects that a preferred option is to have them live at a respectful distance outside the house.  Hence, the very common presence of  ghost houses.  Here are a few examples: 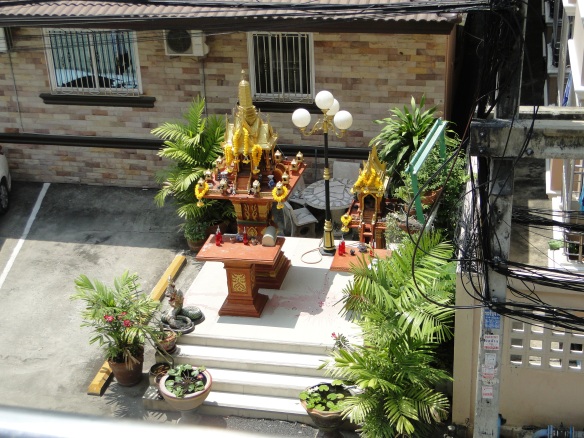 This one is directly behind us–the view from our balcony.

Note the offerings of soft drinks with straws.

As these pictures show, various offerings of drink, incense, and other gifts are presented to the spirits to solicit their good will.

Naturally, the degrees of piety and wealth suggest greater or lesser ghost houses.  On one of my morning walks I encountered a rare rainfall and sought shelter in the nearest open building which turned out to be a large ghost house dealership.  Below are a few of the offerings ranging in price from 300 dollars to 30,000 dollars US. 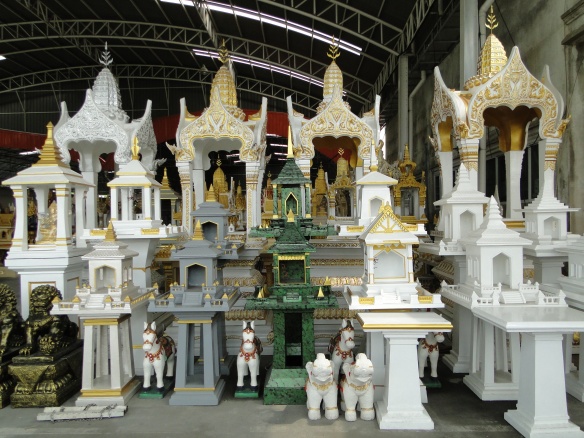 Some available ghost houses–there were many hundreds for sale in this store.

This ghost house is on the first floor of the Sangwattana Mansion, the dorm where we live.  It is a Chinese derivation and has a different look including flashing electric lights, like those on  a Christmas tree.

It is difficult to say precisely what an individual Thai might believe.  As I mentioned, many beliefs are found intermingled.  There is a significant Muslim minority and a quite modest (perhaps one percent or so) presence of Christianity.