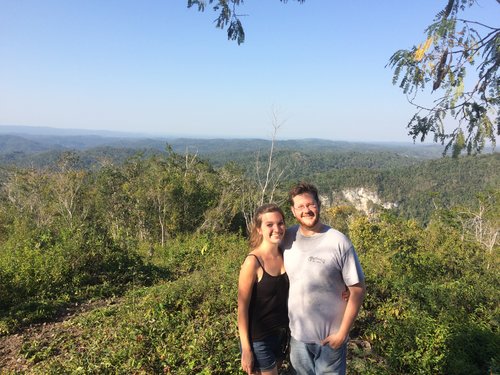 So instead of writing a regular update today I decided to go a different route and tell you what it’s like visiting different people’s houses every week … Which means a few less pictures, sorry! I was talking to a friend just last week about how different it is going to someone’s house here verses in the States. For instance, when I was living in California and wanted to go over and see a friend I would call and we would setup a day and time to see each other. Here in Belize we visit people three days a week in the afternoon and evenings. All it takes to go see someone is to show up at their house, shout, “Good evening,” and then we are typically invited in to visit with the family. Sometimes we do call ahead and make sure the family will be home in the evening, but most of the time it’s more spur of the moment. I think that is one of the qualities of Belize that I’ve come to really appreciate. People here are readily welcoming and happy to have us come visit.

I’m going to tell you about two different visits we have done recently that have stuck out to me. A few weeks ago we went to Georgeville just to walk around and see who we ran into for visits. As we were talking to one gentleman these two boys from St. Hilda’s school ran up, all excited, and asked us to come to their house to visit their mother. We were happy to go and so they led us back along the path to their house, running ahead to hide behind bushes, shouting for us to keep up, and finally dashing up the steps to their home shouting to their mother that, “Father David is here!!” We knew the boys already, just from school, but we had never gone to visit their home. Their mom was happy to have us come in and visit with her, but her excitement was nothing compared to the boys. In pretty much every home we visit I enjoy talking with the family and getting to know people better, but what made this home stand out to me were these two boys. Right when we came into their home they played hosts. We were talking to their mother and one boy ran up and asked if we liked coffee (he’s maybe 9 years old), and then he ran back into the kitchen to try and make some. He would then run back out with a can of food that he was trying to open so we could eat. As he was out talking to us we watched as his little brother snuck back into the kitchen, grabbed a large spoonful of sugar and stuffed it into his mouth before running back out to keep asking us questions. These kids were excellent hosts, and extremely adorable … as well as having excess amounts of energy! Their mother, a very friendly woman, told us how much her sons loved the chapel services at school and how they actually remembered the different subjects and would come home talking about them with her. Her son then ran out with his Bible and wanted to read one of the passages David had covered weeks before in chapel. The boys wanted us to pray with them, read more Bible stories, and sing songs from church. They did not want us to leave! After we had prayed and said goodnight to everyone one of the boys came up to me asked me, “Can you sing me that one song from church that goes something something something something something something and sounds really pretty?” I laughed and said, “I’m sorry, I’m not sure which one that is.” To which he replied, “Just sing every beautiful song you know from church really fast.” It was so cute!  Sadly I did not have time to sing him every pretty song I knew as it was now well past sunset and time to go. It was fun to unexpectedly visit a family’s home we had never been to that not only had really cute kids, but a family where the kids primarily wanted to talk about things they learned in chapel. This visit was one of those encouraging ones where I really felt like we were getting to know these people and making a difference in the little boys’ lives.

Now every week we go on lots of visits, with some being good and some being really hard. The visit I just told you about was fun and easy. We got to know the family better and spend time with these kids outside of the school setting. But this past week has been one with very hard visits. We have visited a few people this week with very sick children. I didn’t know you could love kids you just met so quickly, but this week proved that you could! I’m just going to tell you about one of the boys today, but please pray for both.

Last week we were asked to go to Cristo Rey Village and visit a sick little boy from St. Andrew’s school. We hadn’t met the family before, but we went to their house right away to pray for him. When we got there the little boy was curled up on the couch and clearly very sick. As David talked with the parents I started to make silly faces at the boy. His fever would come and go in the evenings and as it started to fade he began making faces back at me. Eventually he got up and came over to me and we played for the rest of the evening. This kid is a pro at making silly faces. He would make one and then instruct me to copy him exactly, to which I apparently did not do correctly because he would repeat it over and over saying I still didn’t have it quite right! He then went back to his room and grabbed his book of truck stickers and then proceeded to plaster my body with lots of stickers. He told us all about how he missed school and so he decided to throw a party the next day (to the “oh reallys” of his parents) so we and all his school friends could come and eat lots of food and then spend the night in the living room. He then informed us that we would of course all have to sweep the house after as it wouldn’t be fair for his mother to clean at his party! He was full of ideas and plans to see all his friends again soon. He didn’t want us to leave ever and kept making sure we knew not to leave when he would leave the room for a minute. At the end of the evening when we were going to pray for him David anointed his head and when his mom went to brush his hair back after the boy panicked and said, “Don’t touch! That is where the special stuff is!” It was very important to him! This little boy won my heart so quickly! After a couple days we went back to visit the boy and his family again. Right when we walked in the door, after giving us big hugs, he looked at me and said, “I know what you want!” He then ran out of the room to get his stickers and cover me again! After talking and playing for awhile the boy then informed everyone that he was going to marry me. David turned to him and said, “I’m sorry but she’s already married to me!” This did not convince the kid. He said he was going to build me a house and plant lots of flowers around it so we could get married. David informed him that those were fighting words, to which he laughed and then replied very seriously to me, “If you don’t marry me I’m going to take back all the stickers!” A very serious threat! Well, he finally settled with marrying our daughter if he couldn’t have me. Ha! He was so funny!

The next time we visited he immediately gave me a sticker (I think that’s a thing now), and we continued playing a talking for the hour or so that we were at their house. He even called us yesterday to say goodbye before going off to the doctors. While we could barely understand him on the phone, (he’s a rapid speaker!) it was a very cute gesture!

It’s hard telling you about that last little boy. While I’ve only known him for a week and half so far, he’s already, as David calls him my “little buddy.” It’s hard telling you about him because while I had so much fun visiting with him I know he is very sick: acute leukemia at eight years old. While I would play with stickers, make silly faces, and run around the house, David would sit with his parents and discuss his sickness, treatment, side effects, doctors, and every hard and horrible detail of what’s going on with this little boy. I got to grow attached to a very lively little boy full of stories and games, who, other than a few moments of clear sickness or pain during our visits, was otherwise ignorant of what lies ahead of him. David got to sit and comfort grieving scared parents and look over test results. It’s hard to tell you about this. It’s hard because if I just left out the leukemia part it would look like another story of a cute little boy and an otherwise good visit with a very friendly family. But sometimes the visits we make here are hard. It’s never, ever easy to see sick children. I’ve been so angry this week at the sickness all around us. How incredibly unfair it seems to see children suffer. I already said I’m only telling you about one sick boy, but this has been a week of life threatening sickness with lots of people here in town. I don’t know why these things happen, but I do know God is still in control. We’ve already seen answers to prayers just this week with my “little buddy” getting admitted to chemotherapy faster than expected! While it has been really hard to love these families so quickly and then see them hurting, I’m happy God put us in a place where we can get to know them, pray for them, and minister to them in these difficult times.

So that’s just quick look at what our visits are like here in Belize. Sometimes our visits are just happy and encouraging, like the first one, and sometimes we visit families that we instantly love and still grieve with during incredibly hard times.

Please be praying for the sick here in San Ignacio. There are three families that we visited this week who are scared and need prayers for healing and peace.

Thank you for continuing to pray for David and me too!