Russ and Heidi Smith Mission in Chile Russ and Heidi Smith Theological and Children’s Ministries in Chile Russ and Heidi have served since 1985 in the Diocese of Chile. Currently, Russ is involved in the Rural Bible Institute providing theological education. Read more…
It was December 8th when my cellphone rang. Yanett Toro from the Pichi Pellahuen church—a sleepy, little congregation 2 ½ hours up into the mountains from where we live in Temuco, Chile. A number of years ago, they had had a vibrant congregation and a strong Sunday school of about 40. Now there were around 10 adults in the congregation—about 1/3 of them members of the Toro family—and no children. But when Katia, my Evangelism Explosion (EE) for Kids colleague, Russ and I went up there to do a workshop to train people in reaching out to children and provide them with a method and materials to do it effectively, seven adults participated. That is 70% of the tiny congregation! Not bad for a sleepy, little church. When EE got off the ground in early November, 17 neighborhood children attended the Saturday afternoon kick-off. And they asked if they could come to church Sunday mornings as well! Now, by early December, 26 children were coming each week.

Yanett spoke softly and with concern. “Sister Heidi,” she addressed me in the common evangelical fashion, “we have a problem. We want to do something special for these children for Christmas. They are all from low-income families, you know. They most likely won’t receive presents in their homes. We want to get each child a present but we need help. If we had known we would end 2016 with 26 children, the congregation would have been setting aside money each month for this purpose, but until a month ago,” she explained, “we had no children. Now we have 26. Could you find brothers and sisters to help us? Just this once? Next year we will do it on our own.”

What should I say? I wanted to help but Christmas was just two weeks away! How could I go to the churches in Temuco just two weeks before Christmas and ask for help? All the churches were already committed to helping somewhere, I was sure: a home for the elderly, a children’s hospital, etc. Where could I find help for the children in Pichi Pellahuen—children who six weeks ago didn’t even attend church!

“Let your love not be only in word but in deed and in action,” admonishes the apostle John (1 John 3:18) I told Yanett we would pray and see what we could do. How much did they need?

“Whatever,” was her answer, “whatever people can help with.” We worked out that she would send us a list of the names of the children and their ages, and then she would come down with a van to pick up whatever we could come up with—in 13 days! 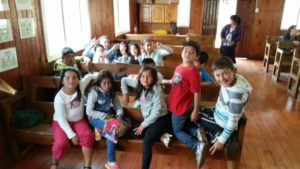 Russ and I prayed. We didn’t have a lot of money available. Suddenly I thought of Rosmarie. Rosmarie is a beautiful woman with a very generous spirit. She owns an exclusive, little clothing boutique in town and she loves Jesus with all her heart. She hosts a weekly prayer group at her dining room table, mostly for women who are just coming to faith, who are not yet part of a church. She invited me to be part of this group when it began in early 2016. Those women are coming into a relationship with Jesus as they experience Him and His answers to their prayers. I called Rosmarie and shared Yanet’s dilemma. Rosmarie was immediately on board. She volunteered not only to talk to the ladies in the Monday night prayer group, but also to make the need known among the customers who frequent her clothing shop.

Rosmarie was on the move—and the Holy Spirit was too! Within five days gifts—beautiful gifts—began arriving. I shared the need with a few more people as well. A recently separated mom I visit and her little daughter chose some special things to give. I shared it on our EE group chat, and a gal out in the country whom I’d only met once donated $30. By Monday, December 19th, Rosmarie informed me that more than 30 gifts had come in. Now we needed to get together to wrap them and, armed with the list of names and ages of the children, our Monday night prayer group met to play Santa Claus! We were overwhelmed by the variety and quality of the gifts—the thought and money that had gone into each one. But how were we to decide which gift would be for which child? We didn’t know these children. We had never even met them. How could we possibly know…? “We need to pray,” I told them. So before we began wrapping and placing gift cards on the packages, we just prayed a simple prayer that the Holy Spirit would guide us in deciding which gift should go to which child. The Lord knows those precious ones even though we don’t. Then we began wrapping and labeling: remote control cars, trains with tracks, beautiful dolls, purses, backpacks…lovely gifts! And the extra money donated served in part to buy the needed batteries for some of the toys as well as a goodie bag for each child, and food for a special Christmas tea for the children and their parents. “Santa’s workshop” closed around midnight! Two days later Yanett came for the gifts. Everything was in readiness and we were thrilled with how it had all come together. We had done our part, but we didn’t know the end of the story; we didn’t know all that God had been doing and would do behind the scenes—until after Christmas. Yanett sent pictures after the celebration and when it was all over called me a couple of days later to share this story. It seems that a few days before Christmas two of the boys, Carlos and Pablo, had confided in her that what each most wanted for Christmas was a remote-control car. And little Maritza said that her Christmas wish was a backpack. Yanett listened but told the children that she had no idea whether they would receive those gifts. Of course they didn’t even know that gifts were coming!

But the Lord knows the hearts of His children—and He knew that these little ones, so recently coming to know Jesus, needed a touch from Him—a special reassurance that He knows them intimately. We had prayed about which child would receive which gift; that the Holy Spirit would guide us as we put the names on the gift cards. Can you guess the rest? It “just happened” that the gifts we had put Carlos’ and Pablo’s names on were the two remote-control cars that had been given! And on the beautiful Peppo Pig backpack we had put the name “Maritza.” If even the hairs of our head are numbered, our loving Lord knows the heart’s desire of each of His little lambs. This Christmas He had done what only He could do. May those precious little ones come to know Him as Savior and Lord in this new year. I think they are already well on the way!

by Russ and Heidi Smith. The Smiths are long-term Missionaries in Temuco, Chile. Support them here.

But the Lord knows the hearts of His children—and He knew that these little ones, so recently coming to know Jesus, needed a touch from Him—a special reassurance that He knows them intimately.
Russ and Heidi Smith 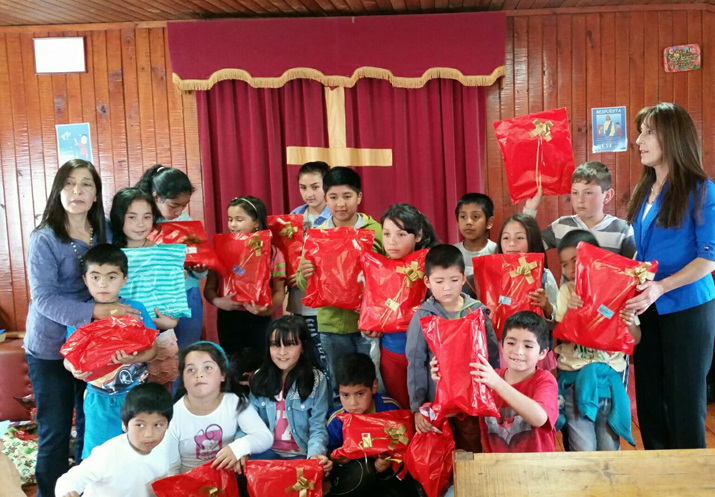