Unity in a divided worldDarash,…

Unity in a divided world 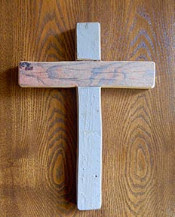 Darash, our Anuak priest for St Barnabas Church Gambella, is a good story-teller.

Recently, his sermon focused on a story of three bulls; One red, one black and one white. “They loved each other as brothers, and together were strong. When the enemy looked at them, he knew that he could not prevail against them. So when night came, he secretly went to the black and to the red one. He told them that the white bull was the problem.  He told them that if they stayed together with the white bull, then an enemy might see them and might attack. They must reject the white bull in order to be safe. They listened to fear and drove the white bull away. When the enemy saw the white bull alone and vulnerable, he came and killed it, and ate. After a while, the enemy became hungry for more. He went to the black bull and said, ‘You are the good one, but the red is not. If you stay with the red bull, an enemy might see you and attack. You must reject the red bull.’  The black bull drove the red bull away, thinking, ‘now I will be safe.’ When the enemy saw the red bull alone, he came and killed it and ate. And then he did the same with the black.”

Darash’s sermon on unity points to the sad reality that our world is full of division – politically, culturally, ethnically, linguistically. We more often see our differences as curses instead of blessings, as reasons to fight rather than as opportunities to learn.

This is true as much in the church as anywhere else. Christians are divided. Some divisions have long and complex histories. Many stem from a right desire to honour and live the truth. Others are just petty. Sorting out which is which is no easy task. I have recently been given the opportunity to be involved in two initiatives which seek to find common ground between Christians and to learn to live and work together. 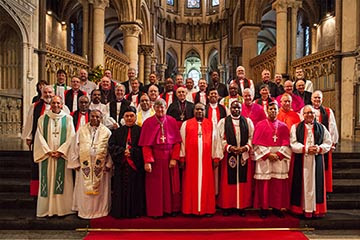 The first is called IARCCUM – the International Anglican Roman Catholic Commission on Unity and Mission. IARCCUM’s task was not to hold another theological forum to sort out what issues unite or divide us but rather to explore how we could witness to Christ together; to point to the love God seen in the saving work of Christ, proclaimed and lived by the church in the power of the Spirit.

There were many profound and moving moments at the IARCCUM meetings but none more meaningful perhaps than at the vespers service at the church of St Gregory in Rome. (Gregory, by the way, was the Pope who send St Augustine of Canterbury to evangelise the British Isles.) During this service Pope Francis and Archbishop Justin blessed and commissioned the nineteen pairs of bishops to go out into the world together to witness and live for Christ.

At the moment of commissioning we were each given a cross. These were no ordinary crosses – they were Lampedusa crosses. Lampedusa is an island belonging to Italy, the closest bit of Europe to the African continent. Small boats filled (or overfilled) with refugees leave Tunisia or Libya and head for Lampedusa. Many of these boats don’t make it. Many refugees, most from Ethiopia, Eritrea and Sudan, drown attempting the voyage. Moved by the plight of these migrants a Lampedusa carpenter began fashioning crosses from the wood of refugee boats that washed up on the beaches of the island. Each of the IARCCUM bishops received one of these simple, rough crosses, most still covered in the cracked paint or bits of grease which betrayed their origins. These gifts emphasised for us that our ecumenism is not simply a matter of doctrine – no matter how important theological truth is – our ecumenism is an ecumenism of bearing witness to the cross of Jesus and walking in his way with those who suffer in this world.

Back in Addis, I was then privileged to be a part of the Lausanne-Orthodox Initiative, a dialogue between Orthodox and evangelical Christians. The presence of Ethiopian Orthodox at this gathering was extremely significant as both Orthodox and protestants acknowledged and looked beyond past prejudices to focus on the abundant opportunities for our different churches to pray and work together.

For me these events were signs of hope in the midst of the mistrust, despair, fear and violence of a world which seems more and more divided.

Mothers’ Union together across cultures


“I am thankful for the opportunity to get to know Nuer sisters; sisters in Lare; sisters in Jikwo…Now I have many Nuer sisters who I love, and it is very good. When I was sent to Dimma, I was scared to go, and I didn’t know anyone. But now… I have many sisters there too. Every Saturday is dedicated to the health program… We taught clean water, Moringa, clean dishes: this is a very big change in our community. Before the teaching, we were sleeping with mosquitos, and with skin diseases. Now this has changed. It remains to go to the people and ask them to open their hearts. You have created many teachers who will go out and teach the community…”
Achua Obang, Anuak, Gambella

For the past three years, it has been a privilege to teach women how to teach one another biblical truth, prayer, and health – both prevention and treatment. We held our last ‘Gambella Anglican Centre’-d training session in September, and began the  transition into a fully African-led “Local Training Program”. Here is what the women had to say at the final session of the “Leadership Training Program (Phase I):

“Through this program we feel like we have come alive… We were living with many difficulties, suffering a lot, with many sicknesses in our communities. Many children were dying because of these sicknesses, and people were wondering, “why these diseases?” We came here and got teaching. We never thought such a big change would come. Now we go to villages and take the teachings to the community and we are well received. People like it very much.”

“We have learned how to make clean water, and how to teach the mothers good ‘life skills’. We put this into practice in our own families. When we are visiting …we share with others what we have learned. More and more women are learning. We know how to care for ourselves and we feel pride. This is the first opportunity to learn that has come to our area.”

“The love of God has made us willing to speak with white people, even though we have no language with them! Before in the villages, there were no toilets, and no place to shower. Now we shower, and toilets have been made – not just going behind the house. Moringa: people were not aware of it, but people now use, even  it is added to porridge for the young children. Now if we have diarrhea, we give Moringa tea, and we see that the time to healing is made short.The children with wounds on their legs – they took a long time to heal. Now we are taught how to clean the wounds. Now we are not seeing so many wounds. We know how to make healing ointment out of oil and candles. And now we are using this for shampoo as well as for soothing skin. The women are happy because this saves money. We no longer have to go to the market to buy shampoo! …We give thanks in the name of Jesus for bringing together Anuak, Nuer and Opo.”

“We are building people up… and it is like giving sight to the blind. Now we know how to take care of burns by putting into cool water. We had no previous knowledge of this. It is very helpful to the community. We have learned about safe cooking fires. We keep them away from children, not to easily reach. Now we have lots of learning tools to help each other, for example, applying papaya fruit to burns. Thank you for caring for us.”

“Sharing of knowledge is the best thing. In the beginning it was only Awilli from Abobo who was teaching there, going to seven different churches. One church was 2 days journey on foot. Now are many who teach in Abobo. With Moringa we have seen very big miracles. Two young children were about to die from diarrhea. Moringa tea was given to them. They were saved. When I would go to Thenyi, there was an old man who had a very big wound for several years. We put Papaya on the wound, and it was healed. In Abobo town, one person was burned. He was going to the clinic, but it was only getting worse.  We made the healing ointment … and put it on the wound twice a day. It was healed. When we go to different villages we see people getting water from the pump. They were washing clothes and emptying the water right by it. They did not use a toilet but would go near the pump. We taught that it was not good to have dirty washing water and waste products near to the hand pump. Now the area around the pump is kept very clean.”

“It was a very big and great plan from God who brought people from far away to live and learn together. Most of the points said by my sisters are all correct and I agree. Especially Moringa. Every home has Moringa – no one has to go to borrow. I ask all my sisters and brothers to pray for all my people. Now children are healthy. We know how to protect them from many different diseases”.

“I have shared with others what I have learned. Now we have become God’s doctors  for the community. The teaching helps the community – the children, the elders, everyone… Now we can help with the needs there. We have learned to put Neem twigs in the cooking fire, and rub Neem leaves into the skin. This keeps the mosquitos away.”

“Let one help carry the bundle of the other. We have learned many good things which have helped to decrease infection. In South Sudan, there are very big problems. I beg your prayers for South Sudan, that God could make a way to bring people back.”

We give thanks for Johann and Louise Van er Bijl, now leaving Gambella for medical reasons. Johann told us of their farewell gift from St Barnabas Church. Apparently there was much discussion about this. Finally it was settled that they would receive an Ostrich egg. This, they were told, was because Johann was like the Ostrich. What was it? It could not fly. It looks like a bird, but it acts like an animal. Now Johann “looks like a white person, but he acts like an African!!”

For the new deacons and priest to be ordained at the Area Assembly November 24th, 2016

For Archbishop Mouneer and the diocese of Egypt with North Africa and the Horn of Africa, that it will be allowed to keep their property and churches

For the Mothers’ Union as they begin a new phase of ministry in the Local Training Program and especially for Rebecca Nyater, our new MU coordinator for the Nuer

Please pray with us

For God’s blessing on the choice of a new dean for St Frumentius’ Anglican Theological College
With thanksgiving as we explore new partnerships in Kenya and in Djibouti
For open doors to ministry in Southern Ethiopia, Djibouti, Addis, and Somaliland
For the new refugees that continue to flood into the Gambella region (60,000 per month)