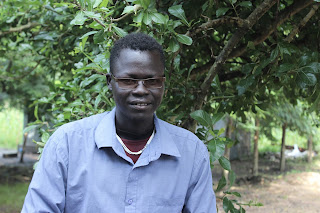 Yohannes Abraham Harum is a 23 year old, dynamic Christian man. He is not married. He told us that it was his father’s consistent Christian witness that brought him to Jesus in 2009. It is evident that the SIM missionaries to the Mabaan did an excellent job at explaining the Gospel to these dear folks as well as their need to disciple others.
Yohannes told us that he has been in a refugee camp for 7 years together with a number of other young Christian Mabaan. They decided to get together every evening, except Sundays, to hold Evening Prayer services. The non-Christian camp authorities promptly arrested them all! Their pastor came and told the authorities to put him in prison too with them, as he was their leader…they were all set free…and have not stopped praising the Lord since!
Yohannes wants to be a pastor. He would also like to translate the Bible into Mabaan. Pray that the camp authorities will allow him to relocate to Gambela so that he may pursue his studies with us at St Frumentius.