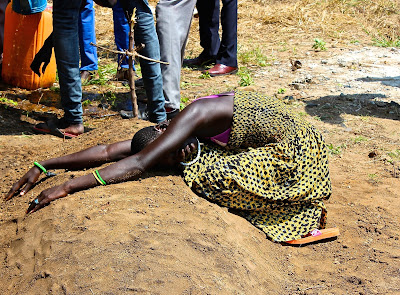 Beloved Ojullu Obilla, died Oct 26, 2015, age 39 yrs. We join with his family and friends in grief and in hope. Ojullu had provided for this dear young woman since the death of her own family. “Who will care for me now?”, she sobbed.
Ojullu was to have been ordained deacon this week at the dedication of St Frumentius Anglican Theological College by Archbishop Mouneer Anis.


Every year I have to preach about war. For the last four years I have been invited by the British Ambassador to Ethiopia to lead Remembrance Day / Veteran’s Day services in Addis Ababa and in other cities around the Horn of Africa. November 11th is remembered as the day on which the guns fell silent at the end of World War I. The sacrifice of those who gave their lives in both World Wars is remembered on this date since that time.
This November 11th a small service was held in a gravelly cemetery near the airport in Djibouti City. Most in attendance were diplomats (British, American, French, Italian, German, Japanese – former enemies now allies) and military personnel from the large foreign bases in this ‘strategic’ little country adjacent to the very nearly ungoverned and ungovernable countries of Somalia and Yemen. The bodies of almost a dozen Allied airmen lie in this graveyard – some shot down over Djibouti (then French Somalia) by Vichy French gunmen.
After the service, it was my conversations with the French diplomats that were the most poignant. One told me that French Remembrance ceremonies are solemn, but entirely secular – no prayers, no hymns, no acknowledgement of God whatsoever. He was intrigued and found our Christian version moving. Both the French diplomats at the event remarked about a question that I asked in my sermon – “while we remember the events of two World Wars past, were we actually, now, in the midst of another World War?” Obviously the ‘war’ against global terrorism is a different kind of war: more diffuse; agonizingly unpredictable. But it is a war, and it is a ‘world’ war. Who knew, that two days later, the French themselves would become the latest victims of terror?
In all this, the Psalm we read at the service points to a reality that stands in stark contrast to human attack and counter attack: “He makes wars to cease to the end of the earth; He breaks the bow and shatters the spear; He burns the chariots with fire.” (Psalm 46:9).  This is not a call to quietism, to inaction – it is a call to lift our hearts and look to a better Ally – One Who loves the whole world.
Two days later I was back in Gambella. No longer hobnobbing with diplomats and their ‘Military Attaches’, I am back with victims of war, with refugees who have fled a senseless power struggle in South Sudan. Once the internet was up and running I read the headlines: “Paris Attacks”; “Scores Dead and Injured in Multiple Bombings in the French Capital”; “French Borders Closed after Coordinated Terror Attacks.” Paris has become the latest battlefield of WWIII. How long, O Lord, will evil reign? When will the bow be broken and the chariot burned in the fire?
My diplomatic friend at the Djibouti service was struck by the message of Christian hope; by the message that God has not only promised to make a final end of all sin, evil and death, but that He has even come down to share the groaning of His creation.
In Djibouti our service concluded with a poem written by the Rev. Edward Shillito. As he watched young men return wounded from the First World War, he wrestled with the question, ‘“How could he preach ‘good news’ in the midst of such devastation?” His poem, “Jesus of the Scars”, proclaims that only a God willing to suffer with his creatures could even begin to provide an answer:
If we have never sought, we seek Thee now;
Thine eyes burn through the dark, our only stars;
We must have sight of thorn-pricks on Thy brow;
We must have Thee, O Jesus of the Scars.
The heavens frighten us; they are too calm;
In all the universe we have no place.
Our wounds are hurting us; where is the balm?
Lord Jesus, by Thy Scars, we claim Thy grace.
If, when the doors are shut, Thou drawest near,
Only reveal those hands, that side of Thine;
We know to-day what wounds are, have no fear,
Show us Thy Scars, we know the countersign.
The other gods were strong; but Thou wast weak;
They rode, but Thou didst stumble to a throne;
But to our wounds only God’s wounds can speak;
And not a god has wounds, but Thou alone.
In Gambella, in Paris, in Baghdad, in Mosel, in South Sudan the wounds of humanity continue to cry out. Only the message of Christ crucified and risen can speak to that cry. 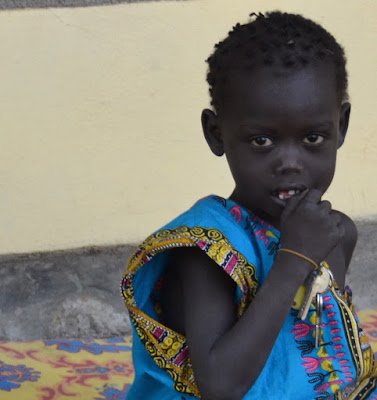 ~ with little Wecca, recovering well from open heart surgery. This little 6 year old would most certainly have died without surgery. As part of our fund-raising for this operation, we sold hand-made Ethiopian crosses. As I handed one of these crosses to a little boy in Montreal, I told him that this money was going to save a little boy’s life. His eyes grew big and solemn. “I want to buy another cross”’ he said.
Thank you to all who contribute to our Samaritan fund.

~ With Jeremiah Maet Paul and his wife Elizabeth on the birth of their son, Kahn, November 14, 2015 Jeremiah is professor of African Traditional Religion at the St Frumentius Anglican Theological College.

~ At the upcoming visit of Archbishop Mouneer Anisfor the dedication of St Frumentius Anglican Theological College to be held November 24, 2015

~with thanksgiving for the 200 recently confirmed in Pinyadu Refugee Camp

~ For the victims of terror in Paris, Beirut, Mali, Somalia, Nigeria and elsewhere throughout the world