Living in Suffering and Hope 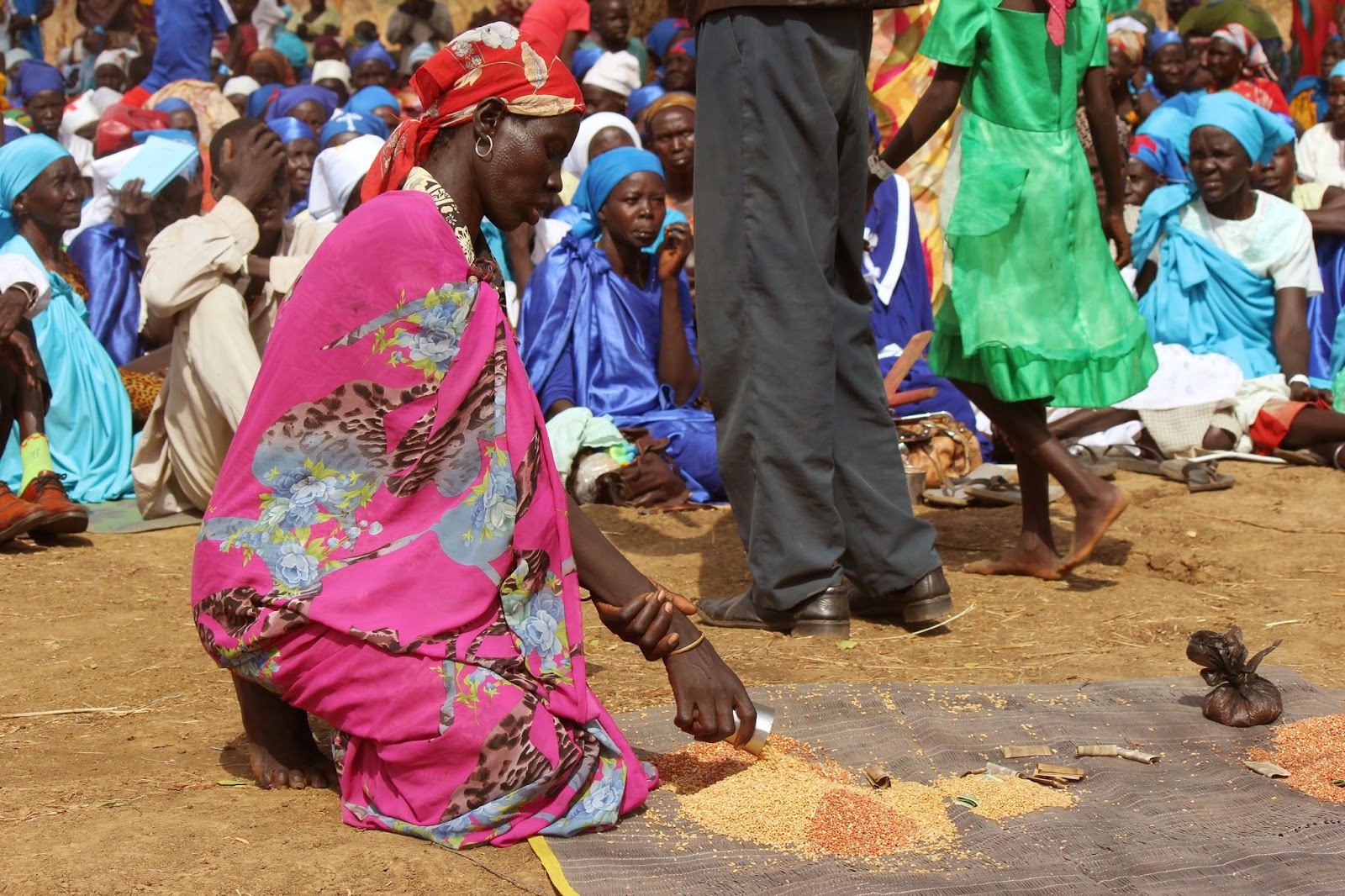 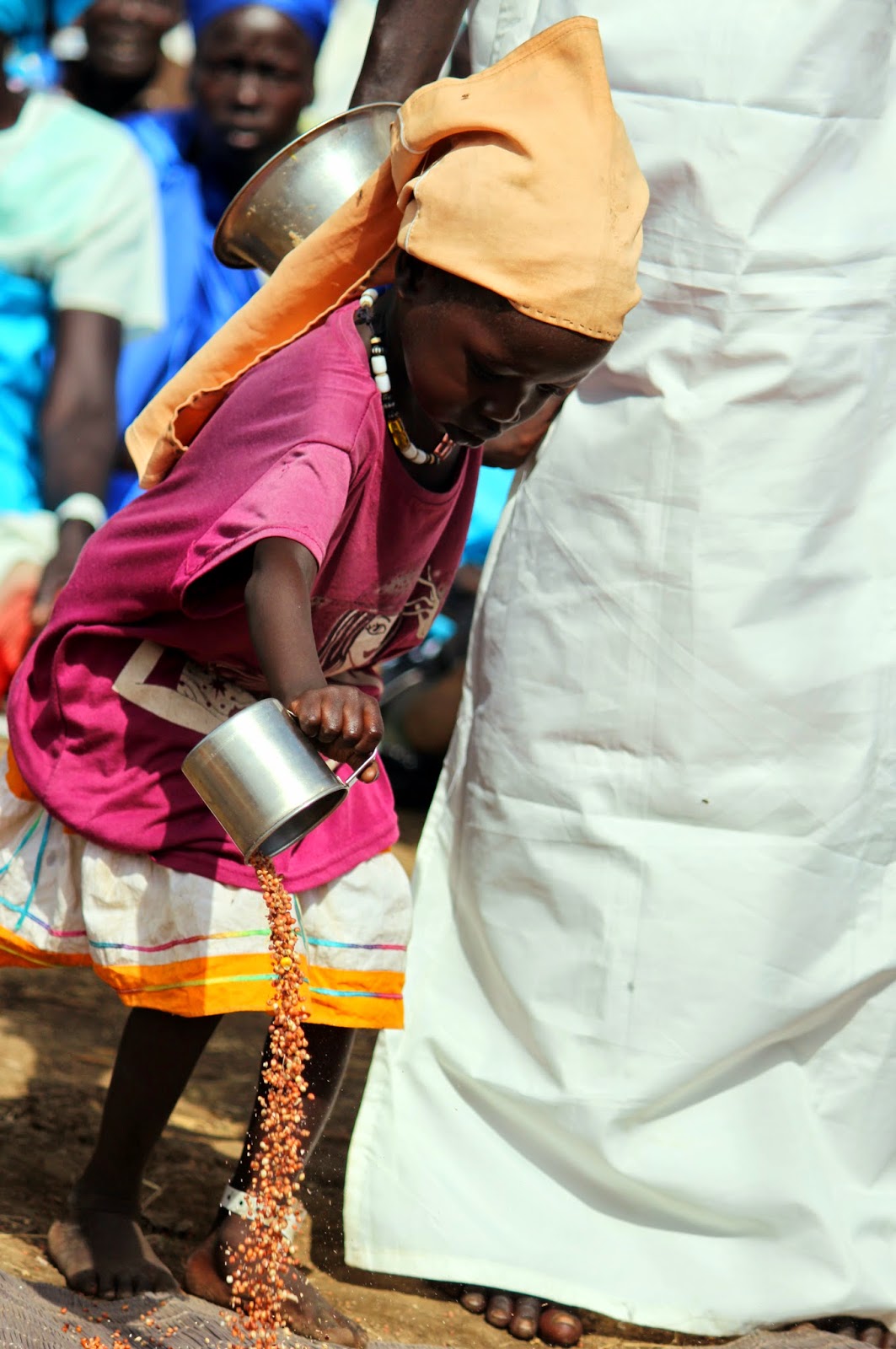 “When 2 Elephants fight, the grass suffers.” The story of South Sudanese refugees living in the Gambella region emerged through the mosaic of comments and insights offered as we listened to a small group of unregistered refugees, who were being helped by the members of one of our churches. “The problem started in Juba”. “The government met on December 15th and disagreed on some issues. They began quarreling among themselves. The fighting spread to the soldiers”. “By December 16th, many people, even women and babies in the streets, had been killed”. “The people fled for shelter in UNMISS [United Nations Mission in South Sudan] compounds throughout the region”. “Church leaders spoke up against the fighting and they were killed; priests, bishops, even the moderator of the Presbyterian church”. “Those who tried to discourage the fighting were told, ‘…if you don’t want to fight, then leave.’ ”

The comments coalesced into a narrative: “And we left, taking only what we could carry. And mostly what we could carry was our children. Even so, we have little ones who went missing as we ran for our lives, for they were shooting at us as we ran. More than once, we were ambushed on the road. Many of our elders couldn’t make it. We walked and ran, snatching only a few hours of sleep when we could. We had nothing to eat but leaves during the days it took us to flee to Akobo. From there we went by boat. We arrived in Matar naked and hungry. No one told us how to register as refugees in Ethiopia. The refugee office in Gambella town is closed. Now we hear that you can only register at the border, with a visa, and with identity papers from South Sudan. But there are thousands waiting at the borders. They are starving and they are still being killed in the fighting, even there. And we don’t have visas or papers. Those who are registered can get food at the new refugee camps. But some of the new camps are in flood zones, and many are now dying of disease. We fear malaria and diarrhea. We cannot register, and, without registering, we have no food except what the church collects for us. And yet, if we register, we fear the living conditions.” (A week after our visit to Akula refugee camp, Isaac Pur of the Gambella Anglican Center, returning with a donation of clothes, was told of the deaths of 5 of the children who had met with us in the church). “The problem is between two big elephants. When the elephants fight, the grass suffers”.

The Road to Opo, April 28,14We set off with as much maize, cooking oil, onions, tarp and mosquito nets as the Landcruiser could hold. We drove past flocks of storks, looking for all the world like small congregations of elderly British undertakers; past birds iridescent in crimson and turquoise; past the Jedi-like Fulani as they travelled from Nigeria on their long migration, and through the mosaic of bright yellow mango seeds and peels left in the wake of feasting travelers (a road definitely “not in Kansas anymore”). The road passed through the new Akula refugee camp. In the two weeks since our last visit, this part of the road had become almost unrecognizable; mini villages of wood & thatch tukels, and grass and tarp pup-tents had sprouted and grown along the once deserted roadside. Finally we arrived in Opo.

I’ll let Grant tell of our visit.
We visited our Opo people this week. They have had some real trouble. Most Opo (there are about 5,000 Opo people in the world) live in Ethiopia, but some in South Sudan. Two weeks ago the rebels in the South Sudan conflict tried to conscript the Opo to fight in the war. When they refused, their villages and all their food stores were burned. They (at least 1,000) have now walked across the border and are staying with the Opo in Ethiopia. Our priest there, David Onuk, who is really the key community leader as well, has invited them to join the church. They have had no food except what the Ethiopian Opo could share with them, so we brought them a truckload. We discovered UN workers there doing an “assessment” of their situation – but they can’t call them “refugees” and give them ongoing support because they have no identification. They will probably (after a month or so) be given support which will last them 2 months. The UN workers were clearly frustrated that their hands were tied – one of them said to us “thank you for bringing food for these people, all our assessments are useless if they just die…”

We unloaded our gifts of food – pitifully inadequate for such a large number, but enough to keep away hunger for at least a day or two. Every stray kernel of maize was carefully swept from the car and carried into the church – nothing would be wasted.

As we took our leave, the three people given permission to ride back with us had metamorphosed into eight extras – the safety hazard caused by crowding apparently of concern only to Grant. We pulled away. Untranslated but unmistakable, the women with us cried out to their friends as we passed, “Hey, Look!!! We’re in a CAR!!!!!! Wheeeeeee!!!” With the inevitable predictability borne of long experience, Grant’s faint and happily ignored protest, “The kids will throw up”, was once again fulfilled. Looking on the bright side, at least no one had diarrhea on this trip! (Note to self: bring plastic bags next time).


Matthew 28 v.1 was quoted in last week’s sermon at St Luke’s Church, Gambella. “Now after the Sabbath, toward the dawn of the first day of the week, the Mothers’ Union* went to see the tomb.” *[Mary Magdalene and the other Mary] “We always say ‘Mothers’ Union’ when we talk of the women disciples of Jesus,” explained John Gach, one of the clergy who had come to Gambella for this month’s clergy training.

The Mothers’ Union teaching event, May 7th & 8th, looked at the causes of recurrent diarrhea. The Gambella region far exceeds Ethiopia’s infant/child mortality of 90/1000 live births, with diarrhea as one of the 5 major causes of infant and childhood death. We practiced making Oral Rehydration Solution using a technique that required neither measuring spoons nor expertise, and yet, when measured repeatedly by me in my kitchen, turned out to be reliable and reproducible. Oral Rehydration Solution (ORS) has saved hundreds of thousands of precious lives since it’s widespread use starting in the 1970’s. Eddie Ozols, of Anglican Aid, Australia, the major donor for our Mothers’ Union training program, asked our Anuak priest, Darash Thatha, how many children’s funerals had he held last year, before the Mothers’ Union teaching program, and how many had he held this year, since the program began almost a year ago. Fifty funerals last year, none this year. 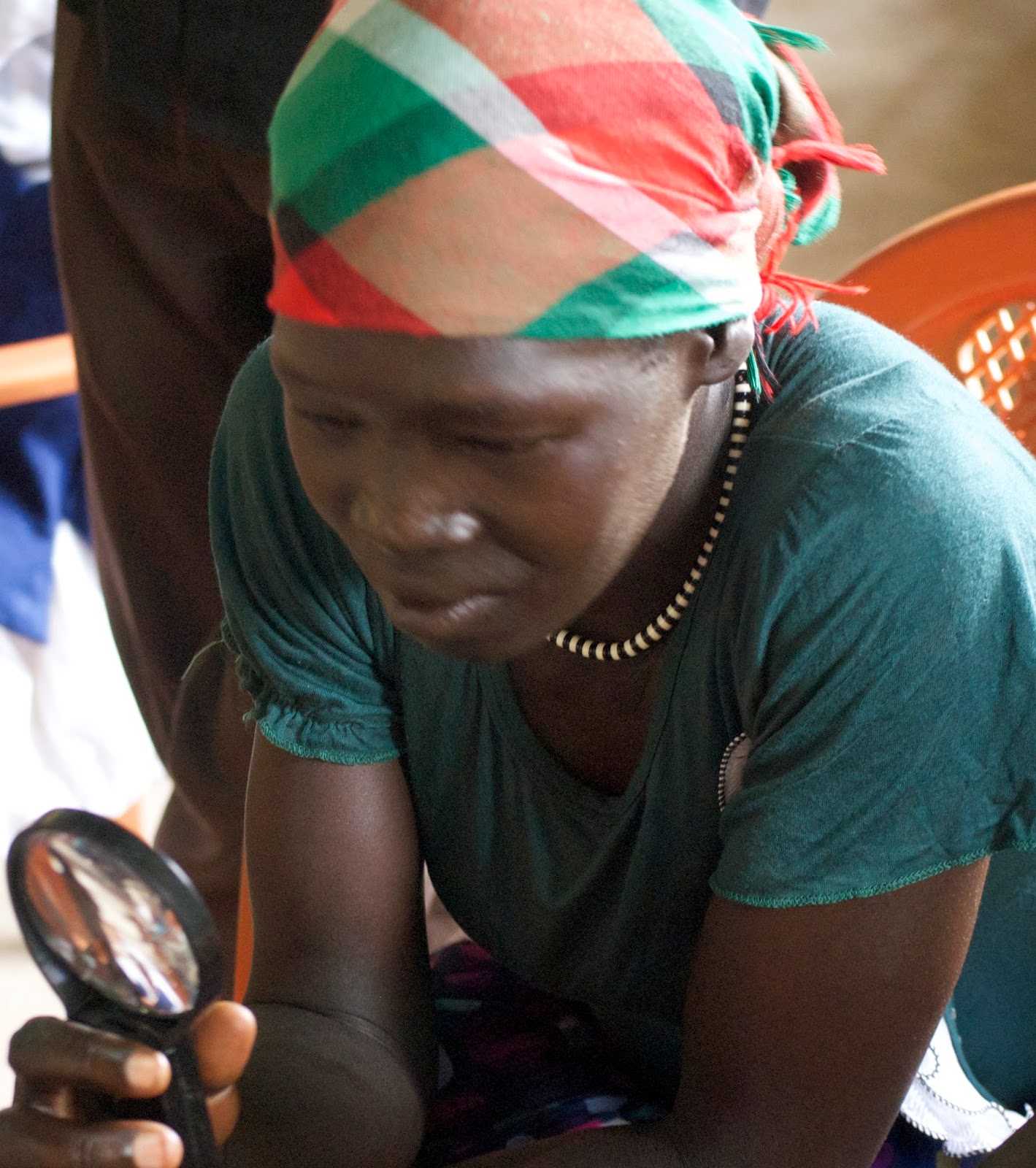 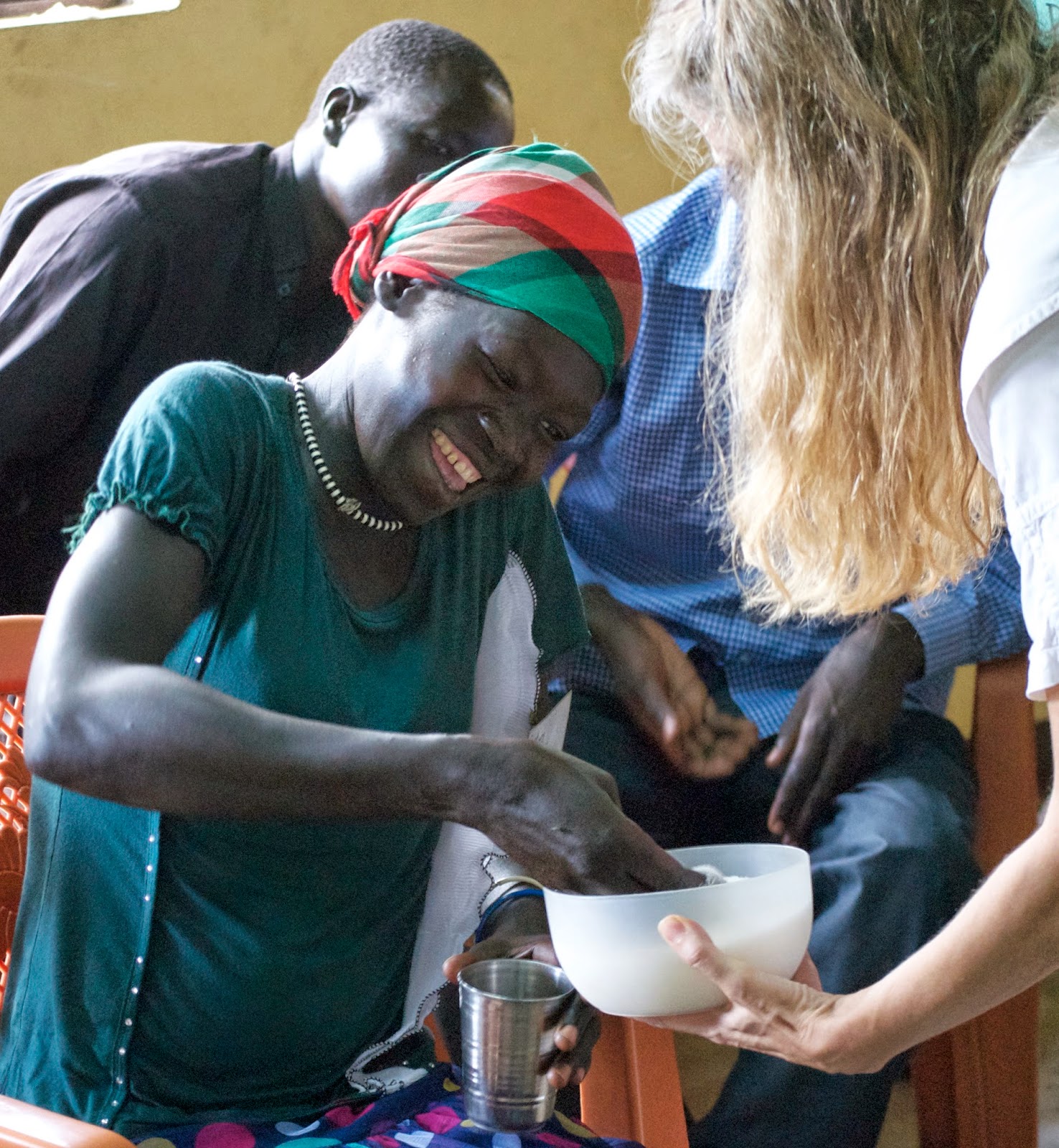 ~ For the 100,000 new refugees in the Gambella region
~For our church members who are sharing their homes and their food with the new refugees
~ For our clergy and lay readers
~ For our Mothers’ Union
~ For Johann and Louise Vanderbijl as they prepare to come to Gambella; Johann will be the principal of the new St Frementius college
~For the establishment of the St Frementius Theological College, Gambella;
-new buildings to construct (faculty and student housing)
-old buildings to renovate (office, library, classroom, principal’s residence)
-college chapel to build
-security wall to complete
-faculty to recruit
-principal to arrive

Many thanks to our visitors,
Rosie Fyfe,  Diocese of Egypt, for her photos of Akule Refugee camp ( Sunday offering), and the Fulani herdsman
and Eddie Ozols of Anglican Aid, Australia for his photo of the young Sudanese refugee at St Luke’s church, Gambella
and thanks to Johann Vanderbijl for his icon of the raising of Lazarus