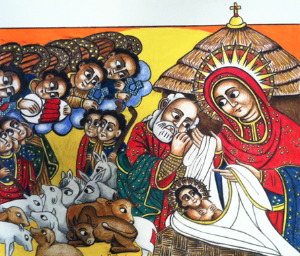 As Christmas approaches, we are meeting the Prince of Peace in unexpected ways.
Three weeks ago, Anuak refugees, driven across the South Sudan / Ethiopia border by some Nuer cattle raiders, ended up in our congregation in Tiergol, where they were housed, fed and welcomed by – Nuer Christians!
Last week, our Dinka priest (who was serving that Nuer congregation in Tiergol) was in Gambella town for our clergy training days when fighting broke out in South Sudan. Although the dispute in South Sudan is political, it also has ethnic overtones. It became dangerous for our priest to return to Tiergol – or to remain in Gambella town where Dinka men are being threatened. Surrounded by the love and support of his fellow Nuer(!) clergy – he has been given transport and enough money to spend a couple of months with a Nuer family in Addis.
Also last week, it was with great joy that we watched as our Mothers’ Union representatives from Opo, surrounded by their sisters from other language groups sang a worship song, the whole group clapping and dancing, some joining in the singing despite language differences. And during the prayer practicum at the same Mothers’ Union gathering, it was a joy to see two translator / facilitators, whose people are traditional enemies, praying together.
This week, we’ve had two South Sudanese refugees staying on the compound, as they wait for papers which would allow them to travel to Addis Ababa. They had walked together through the night escaping fighting in a South Sudan border town and finally arriving at the Gambella Centre (which they were told would be the safest place). One was Nuer, one was Dinka.
Even as war looms, the Prince of Peace is present among His children here in Gambella. Peace, not as the world gives. Fighting evil, not as the world fights. Welcome, Lord Jesus. Welcome this Christmas. 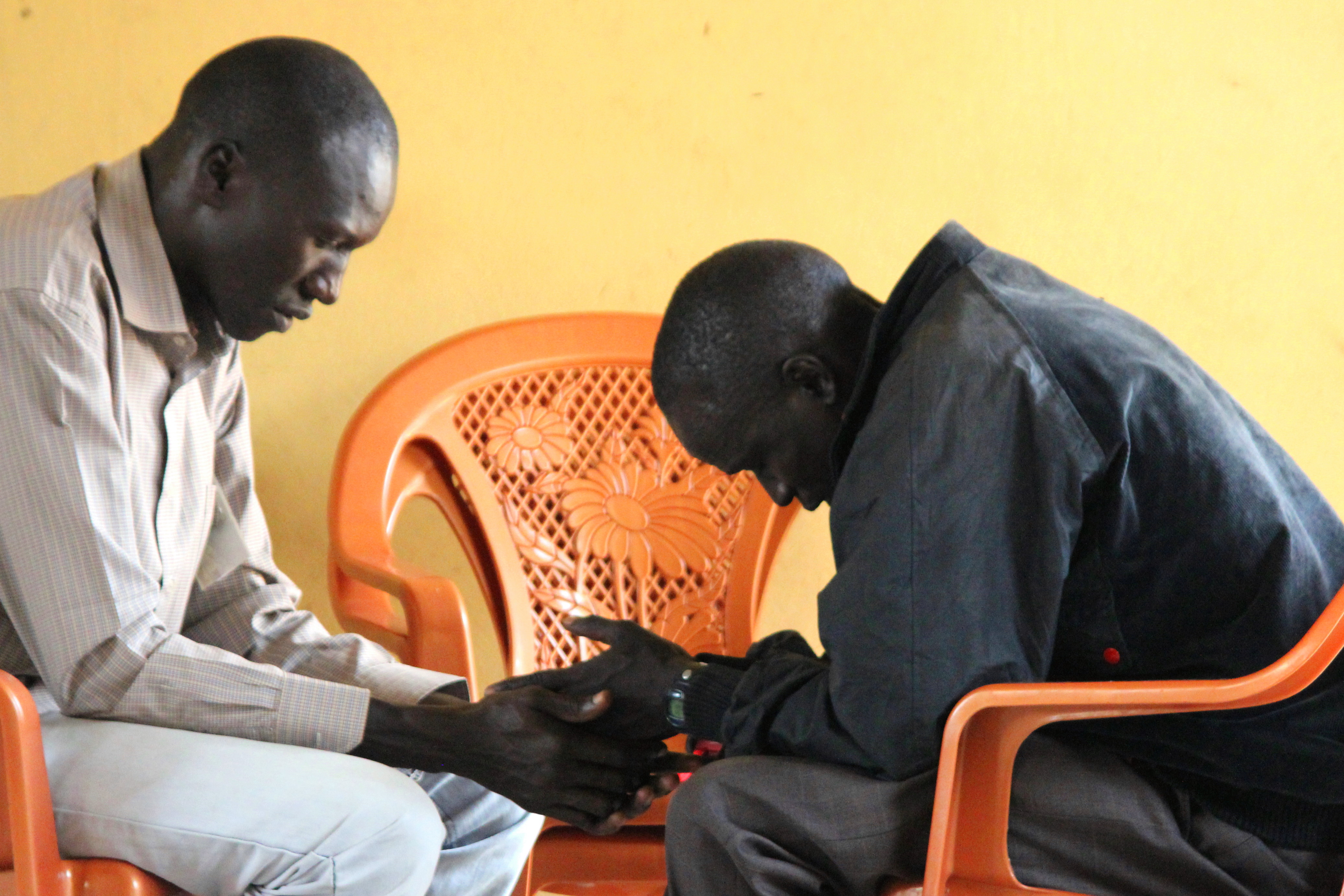 Praying together
As Christmas approaches the events of the first Christmas seem to be echoed in life around us – Herods (more than one) slaughtering the innocents next door in South Sudan seems the most obvious example.
But we’ve also had visits from wise men (and women) recently, these ones coming from the west. A group from the UK (including Grant’s predecessor Andrew Proud and his wife Janice), together with a group from the US (including Johann and Louise Vanderbijl, SAMS USA missionaries who we hope will join us permanently here in Gambella). Both groups brought great gifts (no frankincense and myrrh) as they taught the clergy and the Mothers’ Union, did some repairs around the compound (thanks Pat) and (very importantly) as they shared life with and learned from our African sisters and brothers.
Protection
Not surprisingly, Grant did not wear his glasses into the shower (this omission being rather a habit with him). So when he looked down and saw the little lizard enjoying the tiny shower space with him, it was, well, share and share alike, and he left the little guy to bask in the cool water. It was only later, glasses once again in use, that he realized his ‘lizard’ buddy was actually a large scorpion. Uncanny, unexpected protection – as usual!
More Protection
It is the beginning of dry season. In Gambella, that also means that it is time to burn the grass and the bush that have grown during the rains. Last week it was time for the neighbours to set fire to the bush adjacent to our Centre. It quickly got out of control and threatened to set fire to our compound. Thankfully we had cleared a fire break next to our (fairly useless) wire fence, but this fire was big. Grant and one of our guards spent several hours making sure the fire didn’t destroy our gardens and buildings. The heat was intense and our little garden hose and hand tools weren’t much of a match for the flames, but “somehow” our property wasn’t damaged- can’t wait for a wall to keep out thieves, hyenas, feral dogs – and fire! 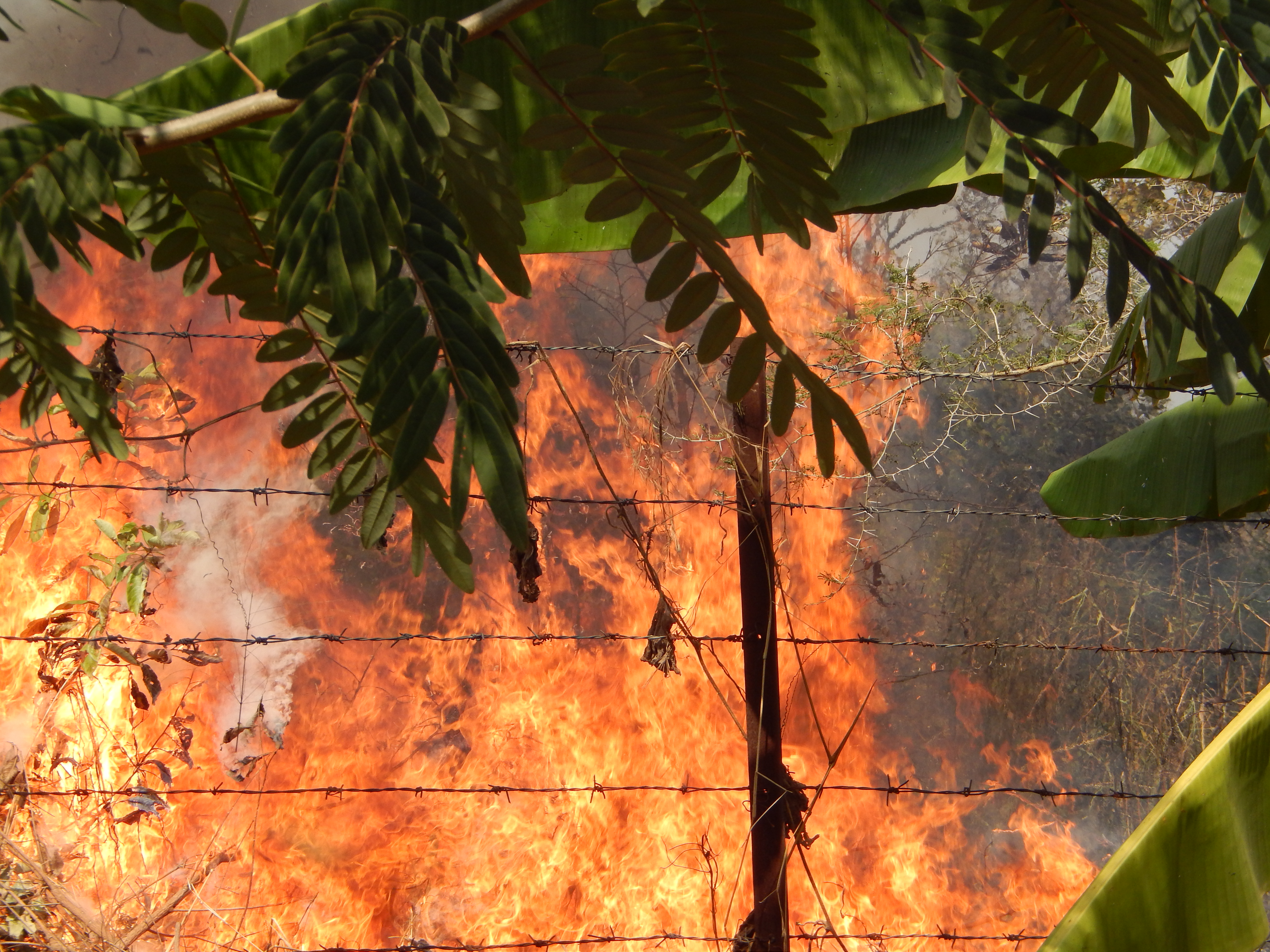 We are constantly aware that we have friends all over the world holding us in prayer. Thanks for that. Your love and prayers are certainly appreciated.
May the Peace of Jesus fill you all this Christmas season.
Grant & Wendy