I recently saw this posted on Facebook; it’s a fabulous aerial tour of UCU, showing how beautiful the campus is. As I watched the first time, I was struck at not only how gorgeous the environment is, but of the memories it evoked, both from being a student, and a member of staff.

Please enjoy! I wish I could narrate it for you!

I bear several titles in Uganda; Reverend, Archdeacon, Auntie, and sometimes Mama. The latter two sometimes come from my students, who sometimes see me as a parent (and it’s an incredible honor, though I feel my age!).

Over the last few years, I’ve grown closer with a couple of the women students, and at different times, two have stayed with me. We’ve had many long conversations and shared several times in prayer, all of which have been precious to me.

Last year, Esther became engaged to one of her classmates, David. I was thrilled for both of them, and hoped to be invited to the introduction and wedding. Esther did me one better: she asked me to be a ssenga, or auntie, for the introduction. The ssenga is the paternal aunt, and since I’m certain that Esther has paternal aunts, I’m not quite sure how she was able to bestow this honor on me. The ssenga has a number of responsibilities culturally, and I think I fulfilled none of them.

In Uganda, there are two ceremonies. First is the introduction, which also doubles as the cultural marriage when it is registered with the government. The introduction is when the bride introduces her groom to the community, and the groom brings the dowry and other gifts for the family. While this is enough for a legal marriage, Christians then go to be wedded in church. Esther and David had their introduction on a Saturday, and the wedding on a Sunday. Though exhausting, I think that’s the way I’d do it; I’m not sure I could handle being married yet not being able to live as though I’m married.

I love the concept of the introduction and how the whole community is involved. Of course, it’s a very long day: both the bride and groom have emcees to carry the day along. The bride’s side sends out several iterations of ladies (often beginning with young girls) from which the groom’s side is to “find” the bride. She is not among them, obviously, and they are given gifts as they go back.

Finally, the bride comes with much pomp and circumstance with her aunties. She walks around the venue a couple times to much ululating from the crowd. When I asked Esther how many people would attend, she casually replied, “About a thousand.” As near as I could tell, that’s nearly how many people were there.

Then the bride and aunties kneel for some of the speeches and prayers. When the groom’s emcee asked the bride’s emcee to ask the priest to bless the lunch, he asked, “Which one? There are like a thousand here.” And it was true.

This is when the groom’s entourage brought the gifts for the dowry, and had he not brought all that the families had agreed to, there would have been trouble in paradise. Thankfully, that was not the case.

One of the things the ssenga is to do is to “find” the groom (he had been sitting in the back) and present him to the bride. I didn’t fully realize that this was my duty, and when another woman came and took the little basket I was holding, I chose to not make a scene.

I wish I had. When it came time to pin the corsage on David, since I didn’t have it, Esther took it and pinned it on David herself. The emcee was quite surprised, and recovered nicely by exclaiming, “Esther! You have taught us something new today!” David said to me a bit later, “Reverend, I thought it would be you [to pin the corsage].” I am utterly heartbroken about that.

We had another gomesi change, but I don’t have pictures of that because the person who had my phone completely depleted the battery taking many photos. Since the function was running late, we opted to remove one gomesi change and moved to the last costume change for the presentation of other gifts. For this, we were seated on a mat in front of the gazebo, and as people brought gifts, we’d rise to our knees to greet and shake hands.

The church wedding was the next day, and I was honored to serve as part of the officiating team. My role was quite small, but clergy have the best seat in the house.

In addition to having the privilege of serving as ssenga and an officiant, most of the groomsmen were David and Esther’s classmates, so I rather felt that my children had come home from university.

Since this is the dot-com generation, photos of the functions were flying around WhatsApp, and I received several photos of myself from students who were in Mukono, as they were unable to attend. That was a riot. Yet the fact that they wanted to show me that they had seen me blessed me tremendously.

So, while my Sunday started off like a normal day, it certainly did not end like one. I supervised a student at his church. I came home, had breakfast, then rested a bit before our evening Eucharist.

About five minutes before my alarm sounded to remind me to go to chapel, a student knocked at the door. He was out of breath, and informed me that everyone was fine, but there had been an accident. It took my mind a few minutes to catch up. I had lent my car to a friend to go down into Mukono town to go to the supermarket. The student indicated that the accident was just down on the road. I surmised that he had run up the hill to tell me to come.

When I went down to investigate, the car had indeed jumped the curb and gone down an embankment, resting on its side next to the Noll block.

Thank God that it was a Sunday afternoon, and there wasn’t much traffic on campus, either vehicle or pedestrian. Naturally, the students who were around were posting about the accident on social media. #whatevs. #nothelpful

Naturally, this happened right around the time of our Eucharist, so I kept sending my students to the chapel. We were nearly finished when they were done, so the wave of students on their way to the dining hall stopped to check on the progress and express their condolences. I felt obligated repeatedly point out that 1. no one died, and in fact, no one was injured, and 2. I was not driving. #Ihavetoomuchpride

I’ve inferred that the accident was mentioned during the announcements in the service for the few souls who were unaware, and I have also inferred that we were included in the intercessions during the service. The students’ condolence messages have been pouring in. I’m immensely touched by that: they’ve been very concerned for me, my car, and that I’m enduring this trying moment. The askari were so helpful: I thanked them profusely, and pointed out that in times like this, the bureaucracy can be painful, but their help brought healing. I sent an email to my insurance agent, and she replied.

But most of all, I’m thankful for God’s grace upon grace. If something like this had to happen, this was the best possible outcome. No one was hurt. That astounds me. My friend has a small, superficial scratch on one arm, and a bunch of yogurt on his clothes. That’s all. Aside from the handrails, there was no structural damage. The car landed in the best possible position. Everyone was amazingly helpful and supportive.

Please join me in praying that this grace continues, and that the integrity and helpfulness of the people involved will also continue. The semester is nearly over, for which I’m grateful, as I don’t know what it will take to bring all this to a conclusion. I really don’t know the steps ahead, and this is one part of living in Uganda that I never wanted to experience. And yet, God’s grace abounds.

At the end of February, SAMS hosted a regional retreat for the missionaries serving in Africa at a conference center in Cape Town. Not only was the setting gorgeous, it was a wonderful time of rest, relaxation, and fellowship with members of my tribe, and it was deeply restorative. 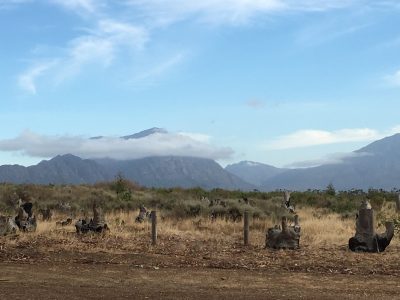 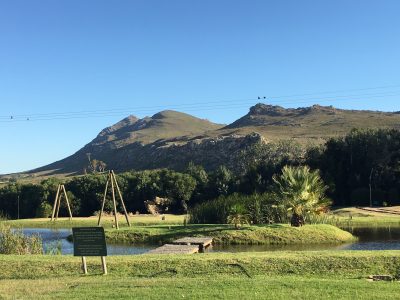 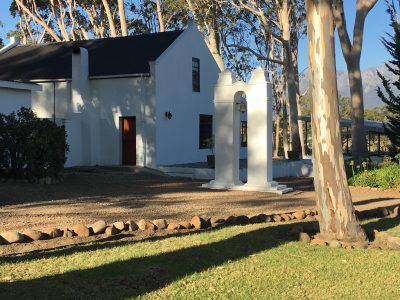 My soul breathes easier just looking at these pictures and remembering the tranquility that we found. Such a gift!

It was a joy to meet missionaries I’d only heard about, and to spend time worshipping, praying, sharing, and just having fun.

Our sessions were the perfect balance of teaching and contemplation, and the Lord showed me several things that continue to ponder and process with Him.

Some of the book recommendations for you to add to your To Be Read pile are Sealed Orders, Healing the Purpose of Your Life, One Minute Wisdom, and The Cloud of Unknowing (Amazon affiliate links for SAMS).

Since I was in South Africa, I decided to pop over to Pietermaritzburg to meet my online Bible study leader, Kelly, and her mum, Karren. When I first joined that study, I feared that I would be the outlier member in Africa, and lo and behold, the Lord gave me an African for a study leader! Over the years that I’ve participated in the studies, Kelly has become a dear and precious friend and sister in the Lord, so there was no way I was going to miss an opportunity to meet her in person. 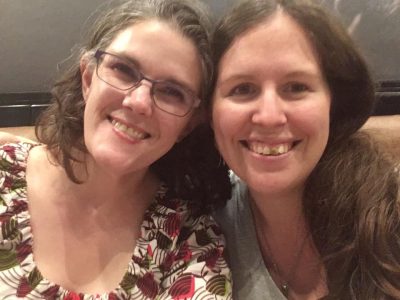 Kelly and Karren were fabulous hosts, and in my too-short visit, we found time to enjoy a great deal of fabulous coffee and time with Kelly’s very cuddly horses. 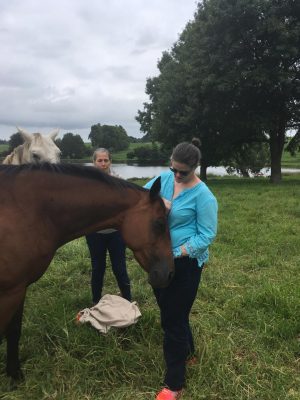 Kelly and Karren live near Indlovu, which is were Nelson Manela was captured and arrested. There is a small museum and a sculpture at the site, as well as a Long Walk to Freedom, which notes the highlights of Mandela’s life as you walk towards the sculpture. 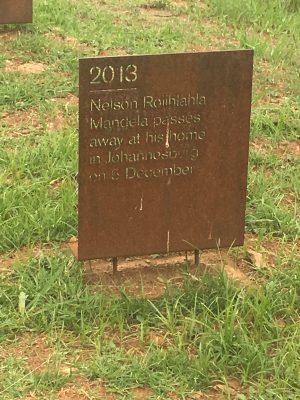 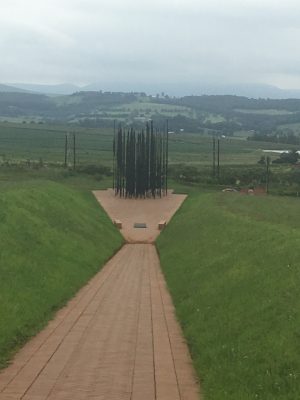 The sculpture is best seen from one certain vantage point; otherwise, it is difficult to see what it is portraying. It was unveiled in 2012, exactly 50 years after Mandela’s arrest. 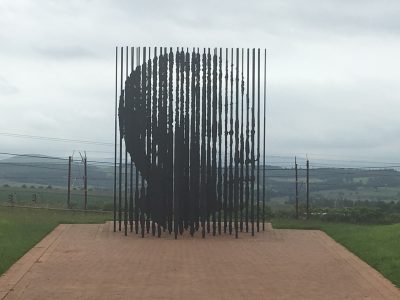 I am so grateful for this time to retreat and relax. It came halfway through the semester, and became the perfect spring break. In college, I never took a spring break, as I always had work to do, so this trip helped to right that imbalance. This semester is rather hectic, so this retreat gave me much needed breathing space so that I can try to finish the semester well. Thanks be to God.

I’m Jessica Hughes, an Anglican priest serving at Uganda Christian University through the Society of Anglican Missionaries and Senders (SAMS). “Here I am” is both an answer to the geographical question “WHERE are you?” and a nod to my favorite Bible verse, Isaiah 6:8.

read more about me