Where was God?  This is a question we often hear when something bad happens.  It implies that if something horrible happens, there must not be a God because otherwise He would have prevented this terrible thing.  The common response from a person of faith is, “God never promised to prevent bad things from happening. He promised to be with us at all times.” True but incomplete.  What exactly does that mean that He is with us during that terrible time?

A couple of days ago, I visited the 9/11 memorial in New York City.  Close to 3,000 people died that day.  Was God there with them?  If so, what did He do?
Of course, it is impossible to know exactly how each person experiences God in those times.  If we look at the life of the human Jesus we can get an idea of what it means for Jesus to be present in tragedy and heartbreak.  In the worst moment of Jesus’ life, in fact the worst moment in the history of the world, past and future, this innocent man hung on the cross, betrayed, abandoned, and forsaken.  As He suffered unspeakable torture, slowly dying a horrific death, Jesus looked out on the people who put Him there and…prayed.  Prayed to His father to forgive the perpetrators of the most heinous crime that will ever be committed.  Next, He promised salvation to the justly convicted criminal hanging next to Him.  He certainly could have used His power and authority to smite the perpetrators and come down from the cross.  Instead, knowing in that horrible moment how the story will end, Jesus prayed and Jesus loved.
On April 16, 2007, my younger son, Hunter was a freshman at Virginia Tech.  Early that morning, a student named Cho murdered 32 students and faculty.  When Hunter returned home, he was in shock and despair.  I was focused entirely on being his mother, not even praying or thinking about the victims.  At some point that week after the tragedy, I received a vision from the Lord.  I could see 3 students lying on the classroom floor in pools of blood.  I knew they were in great pain and terrified.  Suddenly, Jesus walked into the room.  He walked up to each student, held out his hand and said, “Come with me.”  At that moment, I knew the pain and terror were replaced with the peace that passes all understanding.  He loved them.  When Hunter returned to school, while praying at the makeshift memorial, he also had a vision.  “Mom, I saw Cho in heaven surrounded by the victims.  They were telling him they love him and they forgive him.  Mom, if they can forgive him, so can I.”  Jesus forgave Cho and, through His great love, so did Cho’s victims.
As I toured the 9/11 museum, 4 things made an indelible impact.  First, as you walk down a ramp to get to the museum, deep underground, you see a nondescript, rather ugly, concrete wall on the left.  It was odd since every other part of the museum was beautifully designed and finished.  I learned that it was the original retaining wall from one of the towers–the wall that holds back the Hudson River.  If that wall had been breached, the tragedy would have been so much worse as lower Manhattan would have been instantly flooded.  I can see an army of angels holding that wall in place during the explosions that incinerated the building and fire so hot it melted the steel.  God protected the people in Lower Manhattan.

I also believe that the Lord continues reveal His presence to us in the aftermath of the tragedies.

Take the Ground Zero Cross.  In the midst of all the debris, on September 13, a worker discovered a cross, perfectly proportioned, made of I beams, from the prefabricated materials used to build the towers. Recovery workers prayed there and left messages there.  The presence of God must have been powerfully felt by them as they were surrounded by death and destruction.
Many saw the crossed metal as a Christian cross and felt its survival was symbolic. Fr. Jordan spoke over it and declared it to be a “symbol of hope… a symbol of faith… a symbol of healing”. One minister at the site says that when a family of a man who died in the attacks came to the cross shrine and left personal effects there, “It was as if the cross took in the grief and loss. I never felt Jesus more.” Wikipedia

The next item I saw took my breath away.  A New Testament was seared into a 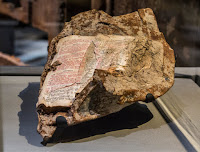 molten piece of steel.  It was open to Matthew 5 which includes the verses:

“Blessed are those who mourn, for they will be comforted.” and “You have heard that it was said, ‘Eye for eye, and tooth for tooth.’ But I tell you, do not resist an evil person. If anyone slaps you on the right cheek, turn to them the other cheek also.” Matt. 5:4,38,39.

Surely, the Lord is speaking to us through this one page, made of flimsy paper, out of the entire Bible that survived the hellfire and brimstone of 9/11.

Finally, I listened to a recording by the brother of the pilot, Captain Burlingame, whose plane crashed into the Pentagon.  All that was recovered was his passport and the prayer card he carried in his wallet.  The plastic laminated prayer card, from his mother’s funeral, survived the explosion as the jet, used as a bomb exploded.  It too had the verse from Matthew 5:4 — “Blessed are those who mourn, for they will be comforted.”  His sister said, “It also has a poem that says ‘I did not die. Do not go to my grave,'” she said. “We took that as a message from my Mother: ‘It’s okay. I got him.'”


When Yarely, our bouncy, pouncy, flouncy, 10 year old died, God sent us the same
message.  As I wrote in a post the day after: 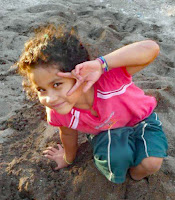 After the funeral service, we processed to the burial site.  It is a cemetery on the side of a mountain in the village of San Buenaventura.  Although the path was long and a bit treacherous, the view over the valley was beautiful.  “Just like the view from our mountain home in Tennessee!” exclaimed Brad, Yarely’s father.   Off to the left was a beautiful view of a valley with a town at the far end.  It was cloudy and dark when we arrived.  (Thank you Lord for holding off the torrential rains during the burial.)  Led by Angel and the small guitar, we began singing a beautiful, meditative song called, “Aleluya” praising God.  I looked up to see the town, just the town, illuminated, shining in the midst of the grey, cloudy mountains.   As the song ended, the clouds returned.  For a moment the Lord reveals, “Yarely is with me, in my Holy City.”

Where is God when bad things happen?  Right there, loving the victims, holding them in His arms, inviting them into a new life.  But that’s not all.  He is here, with us, speaking to us, the survivors, offering us comfort and hope.  The very last thing Jesus said was, “And surely I am with you always, to the very end of the age.”  Always.  Amen.