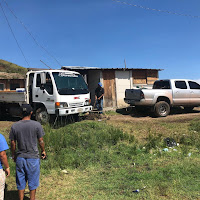 I have a combo team in house.  Part of the team is a medical brigade and part is a construction team.  Yesterday the construction team set off to a rural, mountain site to build a house in a day.  We have finally gotten rain, thanks be to God, which made the dirt road leading to the site a muddy road.  The truck carrying all the wood and supplies got stuck.  Finally, it made it to the site.  The team had just started unloading when a man showed up and announced that HE, not our beneficiary, owned the tiny plot of land.  We can’t settle property disputes in the moment so the team had to leave.  The wood truck got stuck in the mud again and almost slid off a small ledge.  So, now what?  We have wood for a house and team to build it but no beneficiary. Fortunately, my assistant, Edson, is on the ball.  He had already begun scoping out beneficiaries for the houses we will build in October.


Meanwhile, a woman in Flor named Felicity, was reeling from the day before.  Her daughter had been mugged.  In the middle of the night, the heavy rain was too much for her fragile, makeshift roof.  It collapsed.  Felicity was relieved they had survived the disaster but at a complete loss.  Everything she had was gone. They literally had no roof over their heads.  She does the only thing she can do.  She begins to pray, beseeching the Lord to intervene, to somehow provide shelter for her and her daughter. Please, Lord, help us.


Then the wood truck and the team showed up.  The team jumped out of the van and began unloading the wood.  Edson explained to Felicity that, if it is OK with her (!) the team would build her house right then and there.  Just a few hours later, Felicity and her daughter had a new, waterproof, strong house, built to last! 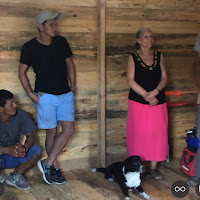 During the house blessing, Felicity shared how overwhelmed she was that the Lord had heard her prayer and answered it..immediately. Her daughter cried. The team was equally overwhelmed to be the hands and feet of Jesus in a real, bona fide miracle for this faithful woman and her daughter.


So, which was it?  A mess or a miracle?  The day sure started as a mess but the Lord has a way of making a mess into a miracle.


Jesus looked at them and said, “With man this is impossible, but with God all things are possible.”  Matthew 19:26