In the US, when you hear “s/he stepped up” to accomplish something or help out, it connotes a bit of a heroic effort.  One steps up in a situation where everyone else is stymied or it is a task no one wants to do or the task is outside of the person’s responsibility.  It is a good thing. 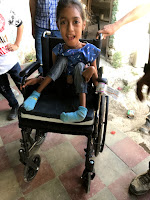 I see people stepping up all the time here.  Last month, the Lord showed me a little girl who desperately needed a wheelchair.  On a Tuesday, I texted my friend, Kathy, my go-to person when we need a wheelchair, and asked her if she could find a child’s wheelchair and send it with the team coming the following
Saturday.  Within 2 hours I had a reply, “We’ve got a one!”  She collected the wheelchair and then delivered it to the team, a couple of hours away, so they could bring it down.  Lots of people in South Carolina stepped up to help a little girl they didn’t know. 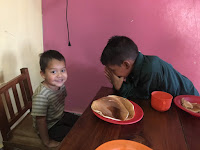 A couple of weeks ago, a 5-year-old girl in our school in Flor told our psychologist that her step-father was abusing her and that he had also thrown her 7-month-old brother on the floor.  By that afternoon, they and their 2-year-old brother were in our Children’s Home, with a caretaker hired to care for them.  There were no discussions about capacity, about affordability in adding 3 children and a caretaker to the already stretched budget.  The staff at the school and Children’s Home stepped up to save these children from further abuse.  Edgar, 8, stepped up and took the 2 year old under his wing, teaching him how to say grace at dinnertime!

Last Friday I got a call in the late afternoon.  “There is a big fire behind the church. We are evacuating all the children.  Can they come to Casa LAMB?”  We didn’t have a team that week and Gloria and Dulce had spent the entire week cleaning every inch of Casa LAMB, even scrubbing the wall behind the stove!  When they heard the news, they stepped up.  They knew that all their work would be undone in minutes, yet with big smiles, they immediately began preparing the house to receive 42 children and 8 adults.  They graciously oriented the Children’s Home cooks to the kitchen and announced they would be back Saturday morning, their day off, to redo all the work they had already done. 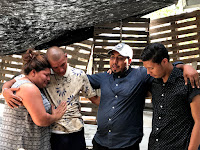 On Saturday, I went to Mengui’s house. Mengui and his wife, Damariz, are the house parents for the adolescent boys at the Children’s Home.  They built a house neighboring our property.  Marvin, one of our boys, had had difficulties and is in a wonderful program called, “Teen Challenge.”  Marvin and a mentor came to spend the weekend with “family.”  Marvin doesn’t have any viable family – biological family.  But he has a large and loving spiritual family. Mengui and Damariz hugged him and told him they are his parents now.  This is not part of their job description.  They stepped up and stepped in to love a child who needs it so very much.  Several of the adolescent boys were there as well as Mario, our grounds supervisor.  We were all there to support, encourage, and love Marvin.  We celebrated the changes in Marvin that he has prayed for and wept with him as he told us of his new, deeper relationship with Jesus. 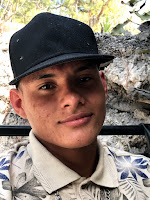 Therefore, if anyone is in Christ, he is a new creation. The old has passed away; behold, the new has come. 2 Corinthians 5:17

While I was there, I noticed a big cart in Mengui’s living room.  “What is that?” It is a bicycle with a food cart attached to it.  Mengui and Damariz have started a neighborhood worship community in their home.  Many of the members are single mothers who have no work.  (Unemployment in Honduras is 50+%) The Lord told Mengui to help them.  So, he took out a loan to buy this contraption and they are preparing to start a business together cooking and selling Chinese food!  Damariz is a cook at the Children’s Home so is very experienced in cooking in large quantities.  They both have the reputation of being excellent cooks!  They, the women, and Carlos, one of our boys who has graduated from the program, will run the business.  Carlos, also unable to find work, dreams of being a chef.

Why all this stepping up?  Because we follow the Lamb wherever He goes.  Because Jesus calls us to step up when we see people in need.   But the real reason is because we are family.   And that is a very good thing.

Therefore, as we have opportunity, let us do good to all people, especially to those who belong to the family of believers. –