Every now and then I see a post on
Facebook ominously declaring that we are in the end times.  My reaction is “Of course we are.  We’ve been in the end times since the moment
Jesus ascended.” However, our personal “end time” could come at any
moment.  A comet could come crashing down
down right now and we’d all be in line at the Pearly Gates. Jesus
says:

Therefore keep watch, because you do not know on what day your
Lord will come.  But understand this: If the owner of the house had
known at what time of night the thief was coming, he would have kept watch and
would not have let his house be broken into.  So you also
must be ready, because the Son of Man will come at an hour when you
do not expect him.”  (Matthew 24:42-44)

Whether it is the END TIME or our
personal end time, the message is clear:
be ready. What do we
do to be ready?  Personally, one thing I
do is say the prayer of confession before takeoff and landing every time I
fly…just in case!
There are two reasons to be
ready.  One is to avoid hellfire and
damnation.  The other is to live into the
promise that is Christ Jesus — eternal life in His presence.
After almost 8 years in Honduras. what
I have learned is that being ready is not saying a particular prayer or going
to church every Sunday.  Being ready is
about how you live your life every day.
Soon after I moved to Honduras, I asked a Honduran pastor, “How is it
that the poor who suffer so much, with no end in sight, have such a profound
faith?”  He answered me immediately,
“It’s because we set our sights on the next life.”  I realized, despite my faith, I and many
Americans set our sights on this life.
Our measures of success and security are job titles, the neighborhood we
live in, the car we drive, our school, the size of our investment portfolio… But,
when you set your sights on the next life, everything
changes.
Hondurans know that they are totally dependent on God.  In our independent, self-sufficient, do-it-yourself
culture, does that make you feel a little itchy?  The Hondurans give everything over to
God.  The country is one of the poorest
in the western hemisphere and the government corruption is mind boggling.  If you ask a Honduran how those conditions
might change, they smile and shrug, “God knows.”  It is not fatalism, or complacency, it is
trust. When they talk about a future event, even meeting for lunch the next
day, they say, “Si Dios permite!”  If God
permits!  And as far as I can tell, they
rarely try to do God’s job for Him.  Have
you ever done that?  “Don’t worry, God, I
got this!  I’ll let you know if I need
help!” Or, do you ever lay out the solution for Him?  “Dear Lord, here is the situation so please
first do this, then this… or…you could do that…either way works for me. Amen.” (Personally, I hope God has a sense of humor!)
The Hondurans walk in the
Spirit.  And they want you to join them.  Last year during Holy Week, Dony, a staff
member, received tragic news.  His father
had been murdered for no apparent reason.
The morning after the wake, Suzy, our founder, and I were in my car on
the main street waiting for the funeral procession to start.  Dony came
over and leaned into the car to talk.  Suddenly an older man, slightly
drunk and reeking of alcohol, came up.  He tearfully told us his
story. He has no family, his mother abandoned him when he was young.
He thinks God might love him but he
isn’t sure.  Sometimes he wants to “leave this world…”  but he is
afraid of death.  He is even more afraid
of not being loved. Dony, on his way to his father’s funeral, began sharing the
Good News with this man, assuring him that Jesus loves him and will never leave
him.  At the worst moment in his life, Dony was evangelizing.  He’s ready.
Hondurans help people who
need help.  If you are trying to back out
of a parking spot or parallel park, a man (or boy) is always there to help guide
you.  Not for a tip, it’s just what they
do.  I can’t carry anything around the
Children’s Home for more than about 3 steps.
Someone, even our smallest children, will rush up to help.
Soon after I got to Honduras, I
impetuously set off with a car full of food to give to the family of a young
woman who worked for us.  We drove 3
hours and stopped at a restaurant.  It
was there I learned that the family lived in some remote area where “taxis
couldn’t go.” Well, I certainly didn’t want to go, at least not in a car full
of women.  So I walked outside onto the
dirt road to look for help. We were right next to a gun store so, not knowing
what else to do, I started explaining my predicament, in fractured Spanish, to
the heavily armed guard.  (Why did I think
that would help?)  Well, the woman behind
the counter heard and rushed over, dialing her phone.  “I know someone who can help you!”  10 minutes later a young man named Israel (!) roared up in a pick up truck.  He
cheerfully loaded all the food, hundreds of pounds of it, into the truck and
off we went.  We drove for an hour and a
half!  All the while he was smiling and
chatting with me.  He knew a little
English and I knew a little Spanish.
When we arrived, we discovered the house was deep in a ravine.  No problem! Israel loaded the food on his
back and ran up and down the treacherous path until all the food had been
delivered.  As we set off back to the
village, I was so grateful for his help.
I looked at him and said, “Tu eres mi salva vida!”  (you are my life saver)  He looked puzzled for a second, then smiled
and nodded.  He dropped us off at my car
and drove off with a wave.  The woman in
the gun store called Israel and he came — because someone needed food and they
are always ready to help. (By the way, it wasn’t until I was back in Tegucigalpa
that I realized Salva Vida is the name of their beer.  It was like I had told him, “You are my
Budweiser!”)

Hondurans are clear about from whom
all blessings flow.  The last team of
2018 came at the end of October.  In
addition to all the other usual activities, they decided they wanted to build a
house in a day for Ernestina, a tiny, homeless, elderly woman in San Buenaventura.  The mayor had given her a minuscule bit of
land way down a dirt road in the mountains behind the Children’s Home.  The only way to get the materials to the site was to carry them down and
back up a ravine.  I was standing in the
woods monitoring the progress when another woman appeared, arms full of wood
that she had gathered for her wood burning stove.  Eva, too, is impoverished but slightly better
off than Ernestina.  She put down her
machete and wood and smiled broadly at me.
“I am so thankful the Lord is helping Ernestina!  Thank you letting Him use you to bring this miracle
to her.”  Eva knows where that house came from.  We were thankful to be part of Ernestina’s miracle.


The team realized Ernestina didn’t have a mattress so they gave me the money to buy her one.  I asked Angel, our singing construction worker, if he could help.  No problem!  I gave him the money and the next day, he recruited a friend with a pickup truck.  They went into town, bought the mattress, and then hauled the mattress and box springs to Ernestina’s new house.  Again, because that is what they do.  If they can help, they do…with a smile. 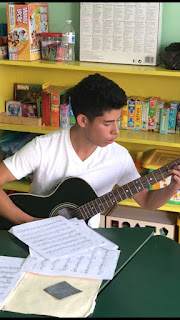 Hondurans live lives of hope.  Jimmy came to us, broken and malnourished,
at 3.  One day I saw him at our school
where he does volunteer work.  He is 19
now.  He was doing his university
homework, playing very complex classical music on his guitar.  His fingers were flying over the strings as
he changed chords and picked a sophisticated pattern.  I asked him how growing up at the Children’s
Home changed his life.  “Suzy came and
gave us the possibility to dream and the possibility of having a better
life.  There is a lot of Christian
influence at the Children’s Home. They teach us that our lives have a lot of
value.  It changed the way I dream.  My hope for the future is more than a degree
from university. More than that, it is to influence society positively. More
than changing my life, it is changing
the lives of others in a positive way.  I
want to give a future to kids who don’t have one now.”  Through LAMB God has given Jimmy hope…and now he plans
to share that hope with others.
70% of Hondurans live below the
poverty line.  40% live on less than $2 a
day. Unemployment is over 50%.  The
government is so corrupt it makes your teeth hurt.  There is no end in sight for the poor in
Honduras.   And yet, they are always
joyful, ready with a smile, eager to help, full of hope and focused on the Risen Lord.  They know this life is less than a blink of
an eye in the context of eternity but the next life is forever. They are
ready.
Brothers and sisters in Christ, let us all be ready…for a
life filled with joy!