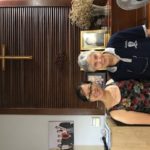 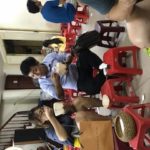 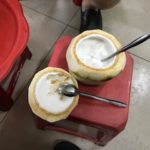 Betsy and Rebecca at the Vu’s apartment, those very low stools on which nearly everyone sits at outdoor restaurants, the coconut jelly, top on left, bowl on right.

After school, Principal Rrbecca Pham and Pastor Jacob Vu invited me and teacher Lheonie to dinner at their apartment. It had been raining hard all afternoon. Lheonie and I were about to call a can when Rebecca called. It had just stopped raining, and at first Lheonie and I were preparing to walk, but Rebecca said Jacob was on his way to pick us up in the car. They live on the 37th floor of a large complex in a beautiful three bedroom two bath apartment. I got dizzy as Jacob drove round and round down several levels in the parking garage.

Rebecca had cooked prawns ala Vietnam (with legs, feelers, shells and guts, a beautiful beef and mushroom plate, cucumber salad with a delicious dressing, and honied lemonade. After dinner we sat for a while over tea in their living room. Jacob told me that before his call to ministry he had worked as an electrical engineer, and he proudly told me he had designed the apartment’s interior with beautiful cabinetry and built-in shelves.

Then we went to the car and took a tour up the coast of the Westlake, back past the Ho Chi Minh memorial and into the French Quarter. We stopped at a small restaurant whose only food was coconut jelly, a dish I had neither seen nor heard of. A coconut’s fibrous exterior is remived, leaving only the hard shell; this is topped, leaving a small saucer-like dish, the interior is reamed down to about a sixth of an inch of meat and the rest of the meat is cut into small pieces, to which is added some sort of gelatin-like liquid. (We sat on those nine-inch high stools so ubiquitous here, and I knew I would never be able to stand up from mine. In the end it took all three of my companions to get me back on my feet.) This dish is served with flimsy long-handled spoons and all but I were able to clean the dish and the bowl of all the coconut meat.

Hanoi nighttime activity looks just like any other big city, with neon lights, noise and bustling traffic, but it was an enjoyable evening, and I know I shall not forget the coconut jelly. I wonder if I could find it at the Eden Center in Falls Church?