WCs I have known and loved (?) 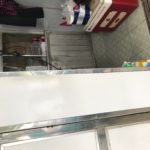 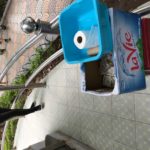 If you are easily offended maybe you might want to skip this.  Sorry the photos are sideways – I have not yet figured out how to get them properly oriented.

29 August – I decided to write about some of the WCs I have seen here. The one at the big lake where I was three weeks ago is like many in Europe, just a hole in the floor with places for ones feet. This one was on the honor system with a container outside holding toilet tissue and a place for donations. My hotel room has a very western bathroom with tub, shower, good toilet and sink. The school has five WCs, three of which are grungy. The very small one off the reception area is so little one can hardly turn around, much less sit down, and it does not look very clean. There is a relatively nice one in the school office, which is also Pastor Thai’s office, and of course there is the very nice one I discovered on the fifth floor the first time I ventured up there. It is the one I use after lunch for tooth brushing and other ablutions, but it has no soap and no hand towels. That floor has the school library, now packed for the move in October, and a game room. The students are at nap time after lunch so no one else is up there so that is the one I like to use, tKing my own soap and towel. Into the other two WCs no one from the US would really like to venture. With 45 students, most of them boys with poor aim, the floors and seats are a mess and smell awful. One of these WCs, on the third floor where most of the classrooms are, has no working light, and a teacher helping a small girl accidentally locked herself inside and could not reopen the door. The school called a locksmith who had to dismantle the door lock, so anyone can walk in at any time. Of course, there is neither soap,nor towels. The W. on the fourth floor has a large hole in the door’s window. Some students dump their soup in the sink, which gets stopped up with bits of veggies. The floor there is also dirty. All of these facilities are cleaned daily but that seems to be of little avail … it takes no time at all for them to return to their pre-cleaned state. WCs are not what I want to write about but those are the facts, ma’am.