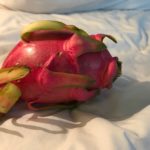 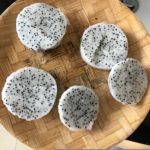 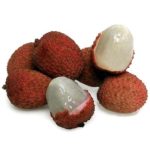 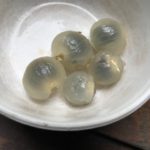 I have tried to try everything and have come across some mystery foods. The hotel brings a couple of bananas to my room each day but one day the fruit that was delivered was something I had never seen. It had skin the color of the wax on an Edam cheese with green tentacle-like attachments. Having no idea what it was, I took it to school to learn that the dragon-loving Vietnamese often eat this dragon fruit. It was easy to peel and its edible flesh is a translucent white filled with tiny black seeds, smaller than poppy seeds. It has a nice, mildly sweet taste, and once peeled I recognized it as a staple of the hotel’s breakfast buffet. The buffet has also featured another whitish, soft-looking something cut in slices and accompanied by what looked like small pieces of rye bread. The white stuff was slimy and tasteless and the ” bread” turned out to be a mystery meat. One try was enough for me. One morning I tried what I thought was deep fried chicken nuggets that turned out to be deep fried tofu, something I came quite to like. Another day, thinking I might be taking small deep fried fish pieces, they turned out to be potato. The buffet sometimes has a fruit medley of tiny cubes of various melons in a yogurt sauce which I always take. One day the medley included cubes of hard-boiled egg, potato and some green peas, which I thought did not meld well with the fruit and which I did not care for as much as the original concoction.

There is a seasonal fruit that grows in bunches on trees that I at first thought were lychee nuts. I learned they are called (phonetically) lanlin. They are shooter-marble size and have a very heavy brown shell which when opened, with some difficulty, reveal a small, opaque white ball of fruit with a hard black seed, resembling their name: dragon’s eyes. Good tasting but nearly too much work for the reward. There are dozens of other foods I have seen on display but am ill inclined to try for lack of identification. One day at school lunch we were served a soup with small pieces of fish, another of my non-favorites, so I managed to pick out a large piece with my chopsticks and deposit it in the soup of one of the other teachers – who saw me do it but did not object. The cook, who prepares about 60 lunch trays a day, fills each with sticky rice, a largely tasteless clear, usually room temperature soup, a piece of fruit, a thin green and stringy veggie of a name I had never heard and which is slightly bitter, and chunks of steamed or wok-fried meat. I now usually take just a small bowl of rice and then add to it the other foods I want from the communal pots. That way I am not wasting foods I have tried but don’t care for, and managing both portion size and selection. I may have written earlier that lunch sometimes includes quail eggs, that I at first found difficult to pick up with chopsticks. The first time they were served I asked how in the world one can control them with chopsticks, the only utensils available aside from the soup spoon, and while my lunch partners were giggling at my question, one of them told me it was OK to pick them up with the spoon. In the meantime I was able to master the chopsticks pick up. I have temporarily liberated a salt shaker from the restaurant because no meal I have eaten here is salted. At lunch I put soy sauce on the otherwise plain white rice.

Fortunately ice cream and many other fruits are the same as at home, but stay turned. I am sure I shall have other culinary challenges to report.