Sorry for the delay

25 August – it has taken a week to find an internet connextion that does not cut off in the middle of what I am writing, but I have discovered the WiFi in the hotel breakfast room, which is high up, is often the best.  It has been an exhausting week.  I have been staying late at school to help the head teacher score student tests and file mountains of paperwork, not leaving until nearly 8:00 p.m.  I also discovered that Lheonie Ver. , the head teacher, lives on the fourth floor of the school. She is the most experienced teacher, having taught for nine years at a Christian school in Ho Chi Minh City.  With the need to be at school by 7:30 a.m. that makes for a long day.  Slept in this Saturday morning, all the way to 6:30.

I am thoroughly enjoying this mission, loving the students and believing that I am helping.  I have at last been able to conduct some small conversation groups, with from three – five advanced students.  They are doing well, speaking in front of classmates for extended periods, telling me about their families, where they live, what their interests are and other subjects.  I also spend an hour each day with the toddlers, who have minimal, if any, English, except for one four year old whose parents both speak English and who have been teaching him at home. He is a bright light in my mornings.  The classes are getting larger: there is a group of seven would-be advanced students who are late comers to English and are being tutored to try to catch them up with the rest of the class.  They will join the 20 other Eagles when the school moves to its new building at the end of October.  That does pose one problem:  right now there are only six teachers, one with the toddlers, one with the intermediates and four with the advanced students.  There is one woman who comes just once a week for conversation with the oldest students, one other part-time woman and, just this week, a part time young man from Singapore.  Not enough to cover the required ground.

This week we had a visit from the Bishop of Singapore, who oversees the church in Nepal and Vietnam, along with the Dean of Vietnam.  The primary reason for their visit was to see the new school space which is still being prepared, but for which the diocese of Singapore will be paying … that is for the purchase of the space only, but not for furnishings and other needful items.  I shall never forget the bishop’s name:  Rennis.  He said his name is “sinner” spelled backwards.  Heasked to be remembered to Bishop Guernsey. I sent the latter an email with Bishop Rennis’s greeting.

I made one reslly good discovery at school.  There are two student WCs that, as you may imagine, are a mess after use by the school’s total of 45 children. One these restrooms has no working lght.  I had never been to the fifth floor, but ventured up there this week, to find a large, clean WC that is seldom used. The floor has the school library, now all packed in boxes, and a game room with a ping pong table.  After lunch, when I want to brush my teeth, the students are all in nap time – yes, even the sizteen year olds – so no one is on the fifth floor. I have claimed that clean bathroom as “MINE”.

I have done only a little sightseeing, and one afternoon discovered that the Hanoi Hilton was just a few blocks from where I was strolling. I had always imagined that the prison was somewhere in the jungle, but No, there it was right in the city.  It is open for tours but I had no desire to pay to see where 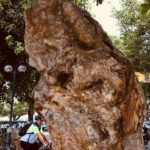 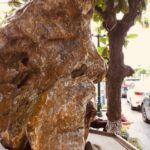 American POWs were so 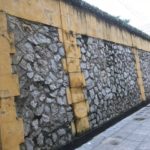 mercilessly tortured dor yesrs.  Curiously, there is a John McCain memorial which resembles nothing remotely identifiable. It consists of two red sandstone pillars said to be a bound prisoner hanging upside down, but I am derned if I could see that.  The memorial is across the road from the lake into which McCain parachuted when his plane was shot down.  I was blessed when I left church a week ago when a member asked where I was going.  I told her I wanted to see the McCain memorial and was planning to take a Grab Bike, the motorbike taxi swrvice.  She offered to take me on her motorbike since she was headed home and lived near the memorial.  She was a much more cuatious driver than the Grab Bike operators, but the traffic was nonetheless horrific. 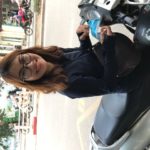 Pastor Thai, my host, invited me for a walk withh his wife one evening this weekend to get a taste of “the real Hanoi nightlife.” I am much looking forward to this.