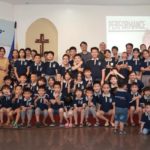 August 9: I actually wrote this two days ago but the WiFi is so unreliable that I could not stay on line long enough to send it.

Good morning friends, today is Tuesday August 7. Apologies for not having written much, because the WiFi at the hotel is very sporadic and I do not have much time to write while at the school, where the connection is more reliable.

I have now finished my first full day of classes and find things much easier than I at first anticipated. My advanced Eagle class is comprised of 27 students from 7 – 12 years old, chosen for their level of English ability, and six teachers. The school uses a heavily King James Bible-based curriculum which I would love to have TFCA’s ESOL classes use – though it is very expensive – its exercises, ALL in English, are separate books for social studies, math, science, Englsh, Bible studies and vocabulary building. The students work largely independently, with teachers only available to answer questions. Each student office (cubby hole) has one of those small flag holders with two flags. Students raise one if they need teacher help and the other if they want permission to leave their seats to go to the loo or the “scoring station”. That is the place in the classroom where they take their workbooks to “self-check” the accuracy of their work against a Key book. Then a teacher reviews and if he/she finds there are still errors, sends the students back to recheck and correct their work. A teacher must sign off on a unit before the student may go to the next one. On Monday the 6th I was given two of the Centre’s grey and dark blue uniform shirts, which all staff and students wear. It is the “rule” that they be worn tucked into skirts or trousers, but the students, being children, need constant reminders. Before class begins each morning the students are called to order, to stand straight with their arms at their sides, not fidget and not talk. Then there are prayers. After this the students are led in the memorization of two Bible verses, Proverbs 11 right now. They read multiple times through printed versions (even I find the KJV difficult language, as I am sure the students also do). Then they are told to put the papers away and recite the day’s two verses from memory. Students are not relewsed for lunch at noon until they can recite the verses from memory in front of a “supervisor” (teacher). If the students have permission to leave their desks they are to push their chairs fully in. I am amazed at these children, who are learning English and the Bible at a furious pace. They begin the day by saying: “good morning teachers, good morning classmates, have a good day.”

The hotel’s eighth floor restaurant has a great buffet, sufficient to hold me until lunch and beyond, so I have taken to eating just two meals a day. The school has five floors and when it serves lunch students come to the second floor kitchen and carry their food trays back to their classrooms where they eat. Sometimes teachers go with them and sometimes they eat at a low table in the kitchen, where Hoa prepares bountiful quantities of sticky rice, soup, wok-sauteed veggies and meat. I had pretty much mastered chop sticks at home long ago … good thing because except for scoops for the soup, chop sticks are the only available utensils. I didn’t know whether to laugh or be insulted when staff recommended I eat in the kitchen, which I actually prefer, because they worried about this old lady climbing the 25 steep and winding stairs between each floor. (My classroom is on the third floor.)

What I have not mastered is the VND, the Vietnamese currency, and last weekend I was taken for a ride because of that.  Many staff had recommended I visit the old quarter, the original walled part of the city, so Saturday I walked the six miles to see it.  As usual, it was very humid, so I decided to hail a Grab Bike, a motorcycle taxi service, for the return to the hotel. One sees them and their green-jacketed and -helmeted drivers everywhere on the roads, generally with passengers, but I found an unoccupied driver. Fortunately I had taken a business card from the hotel and I showed it to him because he could not figure out how to get to the hotel using my paper map. He put the hotel address in his handle-bar-mounted GPS, told me the ride would cost 65 VND, a little less than $3, and away we went. When we got to the hotel, it was clearly obvious to him that I am a foreigner. When I pulled out a few bills I realized much later that I had actually paid him 650 VND, but he offered no change and did not demur. At that point I did mot realize my mistake, but he is probably still telling how he got away sith ten times the price he asked.

As expected, the weather here is very Washington, D.C.- summer-like except that the similar humidity seems much wetter. That makes wearing the heavy school shirt a challenge.

Break time for staff and students comes at 1000 and is nothing short of
chaos, as students, freed from classroom discipline, are running noisily all round or playing games on the floor.

Monday was the opening ceremony, another barely controlled chaos.  The evening began with a procession of flags, the Vietnamese, two church flags from Vietnam and the diocese of Singapore ( which oversees the church in Vietnam), and the school flag. This was followed by a generic pledge to the flags, to an unnamed (but understood to be our own) country, a pledge to the school and one to the Bible.  The Eagle students did in unison a mistake-free recitation of Proverbs 8:1-14, proving thr value of memorizing Scripture. Four students gave their testimonies about God and about their school experiences, all in pretty good English. They then sang a song with gestures, followed by a Skit depicting the story of the Prodigal Son.  Other lower level classes did small presentations and then it was over. Throughout the students could not sit still, talked all the time or just fidgeted.

When I first arrived Rebecca Yan, one of the teachers, told me had heard about me from a Korean woman on an airplane. Impossible as that sounds, I was later able to determine that her husband, Paul, was sitting on the flight with Christine Buchholz and her mother. When Christine learned that Paul is a pastor of a church near Hanoi she mentioned me and my mission to a church school. At the opening ceremony Paul came up and introduced himself, having deduced that I was the person Christine had been talking about. The ABBA English Centre is also attended by four of their five chicldren …. truly it is a Small world.

Lunch hour and nap time are over at 1:00.  Even the 12-year old Eagle students take naps, on mats spread out in the church space.  Then students return to the classroom and I have to go back to work . BTW, all the students and staff are assigned English names, many from them from the Bible, so remembering them is easier than I think remembering Vietnamese names would be.

I hope not to wait so long before posting again.