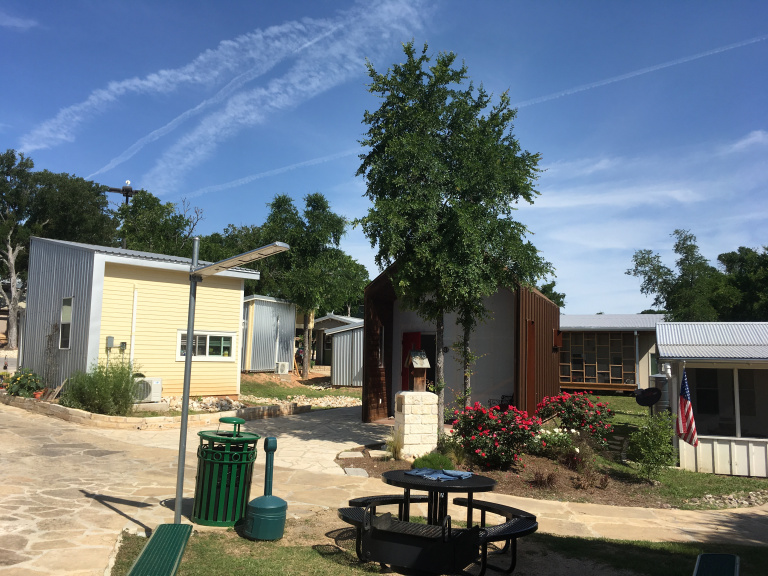 One of the more meaningful experiences for me this year was our recent trip to Austin, TX. While in Austin, Caleb, Lucas, and I stayed at a place called the Community First Village. Erika and I had the opportunity to visit Community First last year and it was unlike anything I had seen before. Community First is a 27 acre village that provides affordable, permanent housing and a supportive community for the chronically houseless in central Texas. Before this past September I would have said “chronically homeless”. But this past September our friend Jared from LIVING Ministries came and shared a bit about their work with the houseless, highlighting the fact that we all have a deep longing for home, and in a sense we are all homeless. Our brothers and sisters on the street are no more homeless than you or I, but they are houseless. Back to Texas. At Community First you walk through this village of 27 acres. And the village is composes of hundreds of tiny houses, RVs and teepees. There’s a garden. And goats. And chickens. And a wood shop. And a blacksmith shop. And more that 200 chronically houseless children of God have found a community and sense of belonging there. And its an inspiring place. An amazing place. A beautiful place.

Alan Graham, one of the founders of Community First calls this place a part of the Gospel con Carne. The Gospel con carne. Does anyone here know what “con carne” means? With meat! The Gospel with meat??

In the passage from John we see the physical Lord eating breakfast with his friends. As they sit around the fire, Jesus seeks out Peter. This same Peter who denied Jesus three times is challenged three times to feed and care for Jesus’ flock. His Sheep. But what should he feed them?

The author of the book of Hebrews also had food on his or her mind. The book’s target audience seems to have forgotten just who Jesus is. So the author goes to great lengths to run through all of the Old Testament prophesies that Jesus fulfilled. He is the promised Messiah. Just not the kind of Messiah everyone was looking for… In Eugene Peterson’s Message we see the author of Hebrews getting a little frustrated with his audience. Now I’m not a Biblical scholar. At Grove City I majored in bike riding with a minor in Quaker Steak and Lube Chicken wings. But I believe the author of Hebrews is doing whatever the first century equivalent of a face palm would be.

So, Hebrews 5:11-14 reads: “ I have a lot more to say about this, but it is hard to get it across since you’ve picked up this bad habit of not listening. By this time you ought to be teachers yourselves, yet here I find you need someone to sit down with you and go over the basics on God again, starting from square one— baby’s milk, when you should have been on solid food long ago!! Milk is for beginners, inexperienced in God’s ways; solid food is for the mature, who have some practice in telling right from wrong.”

Caleb, Lucas. Have you become well acquainted with the person and perfect work of Jesus Christ? Did you see Him revealed in Scripture and the breaking of bread? Did you meet Him at Light of Life? Did you see Him in the mountains of Thailand? Did you feel Him in the embrace of the churches we visited? Then, its time fore you to feed His sheep!!

So go and do likewise.