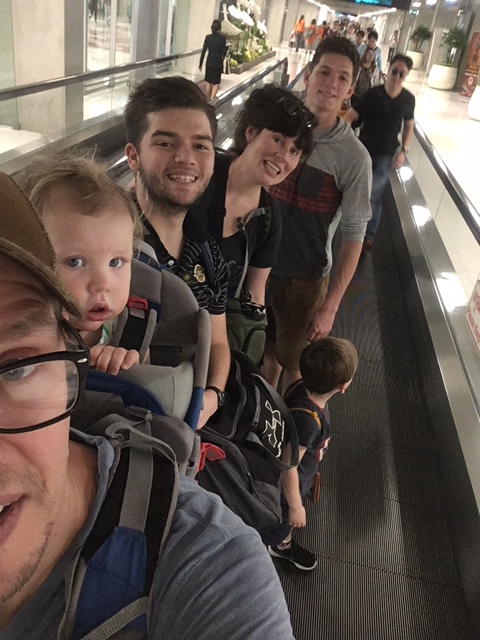 “The low temperature on the East coast will be colder than the high temperature on Mars this weekend,” Nate shared while driving with our fellows to run some errands before our departure to Thailand the next day.

We’d finished the first portion of Agape Year, engaging with local ministries and churches in Pittsburgh and been preparing for our time overseas with the Anglican Church in Chiang Mai, Thailand. We’d gone through thoughtful and meaningful prep and prayer with New Wineskins. We’d had a great time delving into cross cultural and ministry training with SAMS. Our bags were packs. Visas acquired. We were ready.

And, then 5,000 flights were cancelled out of JFK airport due to a weather phenomenon called a “bomb cyclone”. Nate spent most of the day before our departure on the phone trying to get us rebooked on a different flight. We had success in rebooking our flights through our travel agency and while our travel time increased by 20 hours (yikes when travelling with small children), we were grateful to not be stranded at the airport.

After an early morning departure from Pittsburgh, we made it to JFK airport and settled in at our gate for our connection to China and then onto Chiang Mai. When the airline representative appeared at our gate, we went to check in. As she looked at our passports, she informed us we wouldn’t be able to fly today. Shocked, I asked why and what could be done. Because of being re-booked with two layovers within China, we needed Chinese visas, something we did not have and did not anticipate. “Go talk to the ticketing desk outside of the departure gates” she said.

We grabbed our belongings, our sleeping toddler, and booked it to the airlines desk. We were met by a sea of chaos of travellers who’s flights had been cancelled. It was a mess. As we approached the ticket counter, there was woman standing on it, shouting “Everyone needs to be in a line. This line for rebooking. That line for questions.” We definitely had a question. As we explained our situation, puzzlement filled the attendants face. She conversed with her superior and co workers. More confusion at our predicament. After much conversation, the airline said it was a rebooking error by our travel agency and they can do nothing for us. Our hearts sank. We would not be leaving JFK today. Then, Nate’s phone dinged with a message from our missionary hosts. Gerry had been hospitalized with dengue fever.

We returned to our fellows to share the situation. “Text your prayer team. We need prayer,” we instructed. Caleb and Lucas jumped on it and we had most of the Eastern Seaboard praying for Agape Year and the team at St. Andrew’s in Thailand.

We set up camp near the chapel rooms in JFK. There was a sea of stranded passengers from around the world sleeping on the floor, aimlessly walking airport aisles, and bombarding the two restaurants available in the Terminal.

At one point, after about 8 hours of being on hold with our travel agency, we saw a mission team move in for the night close by. They too had had their travel plans disrupted by the weather. They gathered to pray. As they prayed, an airline representative came to tell them they had rebooked them on a flight and now had tickets. Shouts of “Praise the Lord!!” and “God is good!!” filled the stale airport air. And, they eagerly rushed towards us offering the blankets they’d been given by their airline and asking to pray with us and those passengers camped out around us. We were grateful for the blankets (and the prayers), but struggled to see how God was answering our pleas we’d been uttering all day. The airport was chilly, the floors were hard, and we didn’t know how it was all going to turn out.

And, then trickles of God’s presence showed up.

In the face of opposition and disappointment, God showed His agape love for us. He answered prayer. He was present. As we follow Christ and ask our lives to offered as living sacrifices, the path is full of what we perceive as disruptions. We were on our way to serve God overseas to share His love with the Thai, but turned out God wanted us to trust Him along the way and see His extravagant love for us.

Oh, and we made it to Thailand. But that’s another story.