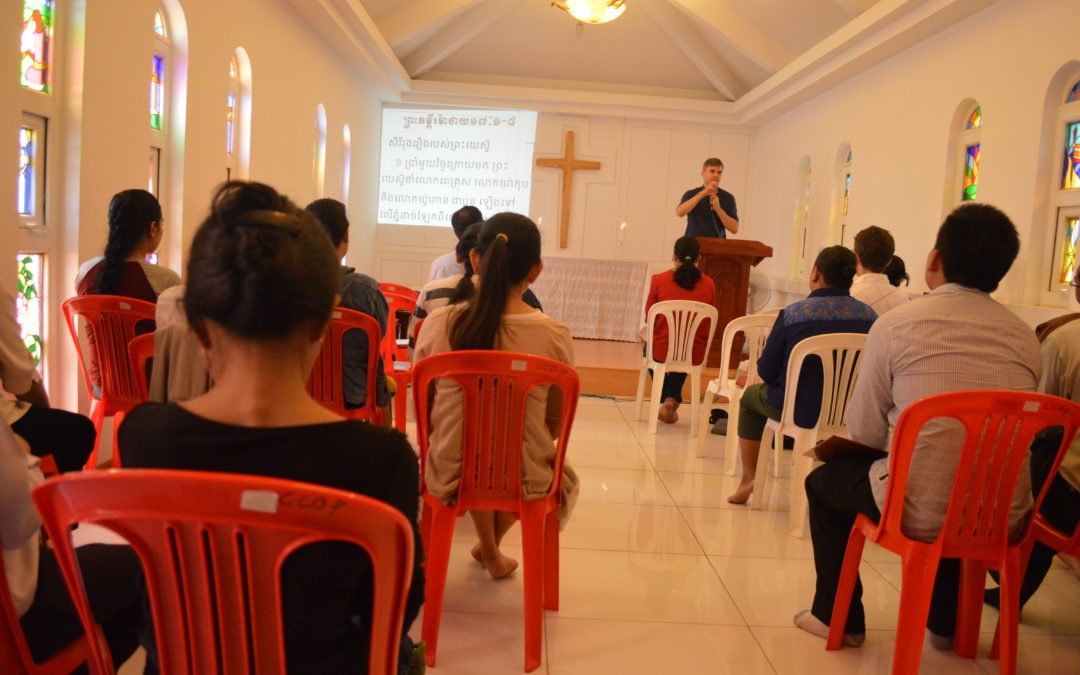 SAMS Missionaries Gregory and Heidi Whitaker serve in Cambodia where Gregory leads the pastoral team at multi-ethnic Anglican Church of Christ Our Peace (International). Heidi is involved in medical outreach to several communities. In addition, SAMS Missionaries Jesse and Sarah Blaine are focused on church planting, outreach, and discipleship with the Anglican Church of Cambodia. Jesse serves as a priest and Sarah ministers with the youth and is training young women in the faith. The Lord is working in the Anglican Diocese of Singapore and the Deanery of Cambodia where your SAMS Missionaries serve:

Space is tight in the Phnom Penh chapel where Cambodian Anglican Christians have gathered to worship on a Sunday morning.

“If you can’t find a seat, just stand for a few minutes and seats will open up when the children go to their Sunday school,” advises Pastor Jesse Blaine, a Khmer-speaking American who leads the congregation.

Circulation fans whir in the quaint rented space that offers stained glass windows and a central location in the bustling Southeast Asian city, but no air conditioning. The church has posted significant growth in the past year. A missionary outpost of the worldwide Anglican Communion, it is one piece of the growing Christian community in Cambodia, where church attendees weigh the truth claims of Christianity a generation removed from the Khmer Rouge genocide.

Blaine preaches on Matthew Chapter 19, his Khmer peppered with recognizable brands: B-M-W, Ferrari, and Lamborghini. The message is about the rich young ruler who is dismayed to learn that he must give up the material things he loves in order to follow Jesus. Members of the congregation nod. Blaine later shares that foreign investment—some of it legitimate, some not—has brought new wealth and materialism to Phnom Penh. The neighborhood in which the Church of Christ Our Peace (CCOP) Khmer ministers bears little resemblance to its appearance just a few short years ago. An upscale gym near the church advertises an $800 annual membership, a price unimaginable to most Cambodians. A new Bentley dealership has also opened.

The Khmer Rouge regime-initiated genocide, which resulted in the deaths of between one-quarter and one-third of the Cambodian population in the late 1970s, left little church presence. Christians, along with any western-educated Cambodians, were targeted by the atheist regime. The church—like the 19th-century French Gothic Roman Catholic cathedral in Phnom Penh, torn down stone by stone—was nearly completely wiped out.

Ten years after the genocide ended, only a few hundred Cambodian Christians survived. Today, that number has increased to approximately 150,000 Christian believers, according to Blaine, making it one of the fastest growing Christian populations in the world. Some estimate that 2-3 percent of Cambodia’s citizens practice Christianity. According to the Pew Research Center approximately 97 percent of Cambodia’s population follows Theravada Buddhism.

Protestant missionary activity in Cambodia dates to at least 1923, but the church grew slowly. Anglican Church activity began in 1993 after the Archbishop of Canterbury wrote to the King of Cambodia asking permission to form a worshiping congregation in Phnom Penh. Three Anglican churches now minister in the city, with four mission extensions in the provinces.

“Serving in Cambodia is very challenging for many different reasons,” explains Blaine. “There is a very strong ‘cultural inertia’ towards retaining their culture, their historical background. For many Cambodians, it is difficult for them to consider something beyond what they’ve already known. On the flip side, it is very difficult for many young Cambodians because they want to chart a new path for themselves and the country going forward. As they do that, it’s hard for them to find role models. It’s hard for them to find ideas and pathways that they can pursue.”

Blaine explains that a successful Alpha (introductory Christian beliefs) course this past autumn and a personal finance training course are pushing the church out into the community and forcing them to find ways to creatively bring people into the church.

“Our hopes were to have 8-10 people for each [Alpha] session, and we ended up averaging about 30,” Blaine shared. “It was a pure joy on our parts to welcome several participants into the family of faith and we look forward to baptizing them in February,” Blaine explained that the Alpha course helped the disproportionately young congregation articulate their Christian beliefs. Two more Alpha sessions are planned for 2018.

Dania Prak attends the morning prayer service at CCOP. She is an English-speaking Cambodian who once lived in the struggling neighborhood adjacent to the church that is now transformed with western brands and boutique hotels catering to foreign tourists. Prak remembers that as a small child the free biscuits lured her to church. She kept returning—and created mischief during Sunday school. But the Gospel message took hold in her heart, and now she is a key lay leader in the congregation.

The Rev. Steven Seah leads a tour of the future sanctuary of the Anglican Church of Christ Our Peace in Phnom Penh, Cambodia. (Photo: Jeff Walton / IRD)[/caption]

The Rev. Gregory Whitaker, who leads the International Congregation at the Church of Christ Our Peace, says that the congregation has found itself serving a highly transient community of educators, doctors, and non-government organization (NGO) workers.

“The challenge is not to see them as appendages or someone whom ‘oh, you’re only here a short time and it doesn’t matter what we do with you because you’ll be gone.’ If we adopt that mindset, then 70 percent of the church goes unpastored,” Whitaker explained.

On a typical Sunday, between 140-200 internationals and English-speaking Khmer meet in an auditorium for a 90-minute liturgical worship service that also features a praise band and evangelical songs. According to Whitaker, only about five members of the congregation have an Anglican background. Families with kids, Canadians, Nigerians, and Americans are in attendance.

Anglicans are also ministering among the sizeable Khmer-language ethnic Chinese population, nearly 80,000 strong in Phnom Penh, some of whom hail from the Chinese diaspora and others from mainland China.

At Church of the Good Shepherd (COGS) in Phnom Penh, one visiting Chinese pastor is in the process of relocating after police shut down his Bible school in China. Cambodia has relatively few religious restrictions, and enterprising pastors see the growing ethnic Chinese population as receptive to the Gospel.

Congregants sing songs in Khmer at a recent Sunday service, some of which are Taiwanese compositions instead of songs translated from English. A multi-ethnic feel permeates the space; two recently arrived students from Beijing introduce themselves. The pair will learn Khmer and then teach Chinese, with the ambitious goal of leaning the language in four months.

Outside of the city, ministry takes place at informal rural preaching stations, including a small tidy building in Rokakos, where young children pile in for games and stories.

Ministry in Rokakos, by necessity, looks different from that in Phnom Penh. According to The Rev. Steven Seah, Associate Dean for Cambodia, the congregation has only three adults but dozens of children—up to 200 came on Christmas Day. The difficulty of ministering to so many children with little adult help has led to the goal of discipling a smaller number of children who, as they grow older, can serve as leaders to educate the younger children.

Children, Seah notes, are far more receptive to the Gospel than their parents, although parents encourage them to attend church ministries because they see value in the structure and moral instruction that the children receive.

Nass Sowannia, a Khmer lay pastor at the site, says they could do a lot here if they had more help.

Church growth has also been facilitated through ministries like Project Khmer Hope (PKH), where vulnerable young people in Kampong Speu Province learn skills and are discipled. Begun as a ministry of St. Andrew’s Cathedral in Singapore, PKH has identified ways at-risk children can achieve financial security by preparing for work in Cambodia’s growing hospitality sector.

Susan Gok served as cabin crew with Singapore Airlines for 15 years, became a Christian in 2001, and eventually came to Cambodia to serve at PKH. With a background in hotel/hospitality management, she trains the approximately 50 people ages 17-23 who cycle through PKH’s two-year program each year. English is taught the first year. First and second year students can be placed in internships with hotels, including some of the top hotels in Siem Reap and Phnom Penh.

Many of the trainees become Christians—48 were baptized last year—and the program has grown from placing trainees from its first graduating class in 2006 in three hotels to 15 hotels today.

“[Our] ongoing prayer request is that God would raise up leaders, Cambodian leaders, from within the congregation, maybe from within Alpha groups or within the financial peace group,” Seah reports, “people who have a true heart for the Lord and heart for their country.” Communications Manager for the Institute on Religion & Democracy