And None Shall Perish: The Church in SE Asia 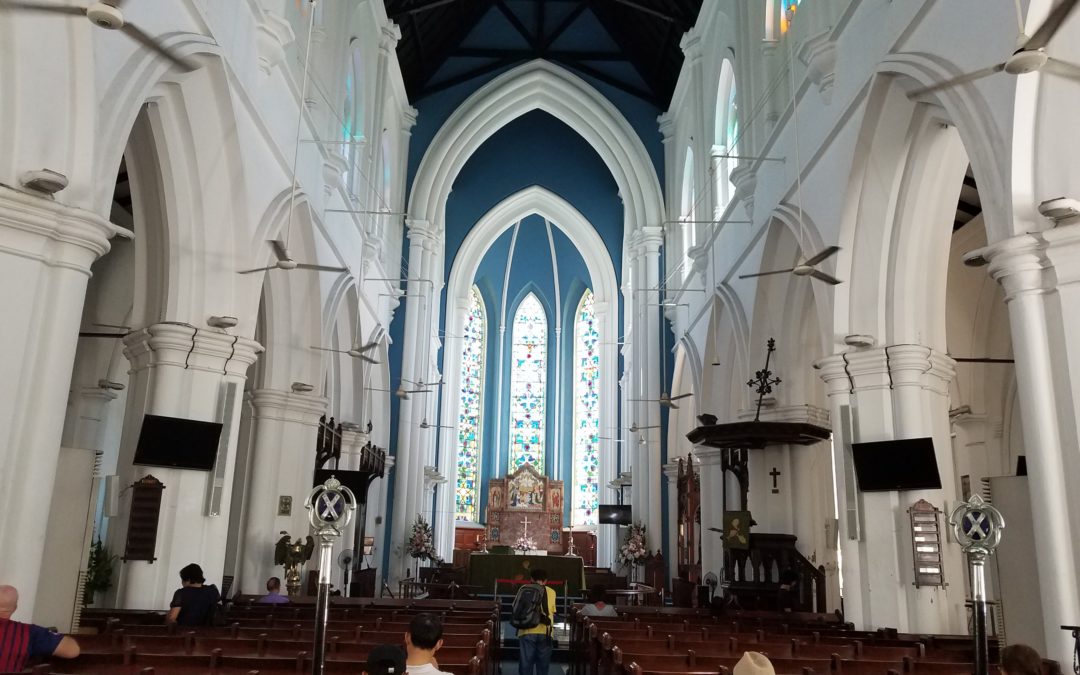 We lived in the island nation of Singapore as expats in the early 80s and considered the Anglican church we visited “sleepy” and moved on to join a multicultural, Spirit-filled Presbyterian church. But the Lord was at work and through a powerful movement of the Holy Spirit the Anglican church came to life and grew in numbers, commitment, discipleship and mission.

As Michael Green chronicled in his exciting book, Asian Tigers For Christ, it was a mighty outpouring that has grown across the Province of South East Asia and spanned the twelve time zones and half a billion residents of SE Asia. Even though Christianity has doubled in Singapore since the 80s, Christians are still only 20% of this strategic, multicultural nation. The Diocese of Singapore has a unique approach to barriers and challenges. When Singapore MRT (the subway), needed a portion of their colonial St. Andrew’s Cathedral grounds for a station, the Diocese responded boldly by building a welcome center and coffee shop adjacent to the new station. Even though proselytizing is illegal in Singapore they have planted a church in a rehabilitation hospital, have led in Autism education, community services,healthcare and have sought to serve the nation in many creative ways.

Through evangelism, church planting, discipleship and commitments to ministry, a charism for international missions has grown. With the establishment of the SE Asian Province and a huge financial commitment to missions, Singapore reached out to establish missionary deaneries in the six surrounding countries of Thailand, Laos, Cambodia, Vietnam, Nepal and Indonesia in the ’90s. Singapore went for the long game, carefully studying, praying, and discerning how the Lord would have them reach each people group and culture for the Gospel. They moved forward with a unique combination of patience, impatience, and holy boldness. Early in this process Singapore considered the mission vision too daunting and significant to do alone and reached out to invite partners from mission agencies, such a SAMS, dioceses, parishes and provinces across the world.

SAMS-USA alone has contributed ten missionaries and short-term Bridgers and has a contractual relationship with Singapore in this SE Asian mission, as does the Anglican Church in North America. Mission partners for this Consultation Roundtable have grown to 24 countries, four Provinces, 16 Dioceses, 26 mission agencies and 225 delegates. Through worship, workshops, scholarly papers and great fellowship the tri-annual gathering, hosted by the Diocese and the Province of SE Asia, educates and inspires.

So, what has happened with this bold mission vision? Now more than 12,000 Anglicans worship in these six SE Asian deaneries and ministries and missions are growing. Missions include language centers in some countries, schools or preschools in others, university student centers, farming, justice issues, whatever seems to be the best way to reach out to that culture and to build indigenous leaders.
In the past nine years, we have had the privilege to witness ministry and to serve in missions in Thailand, Cambodia, Nepal and another Asian partner, Myanmar. We have seen sacrificial commitment and exciting fruit born out of prayer, strategic planning and godly partnership. The need is great and the time may be short, please prayerfully consider how you might raise interest, workers or contributions to this SE Asian harvest.

Carol is the Vice President of E412 Ministries. Her husband Clark Smith is a SAMS Board of Trustees member. When they are not supporting missionaries and ministries around the globe, they reside in Savannah Georgia. Learn more about E412 here.

Is God calling you to serve in SE Asia? Discover the many opportunities available here.