One of my favorite songs is called Alaba a Dios (Praise God.)
To me it is exemplifies the Honduran faith.  It is about praising God no matter what.

It goes on to encourage us:

A few weeks ago, I was reflecting on the words, “He opens doors no one can close” when suddenly they struck me a new way.  I had always thought about God giving us opportunities, new hope when, perhaps, a door in our lives had closed.  I realized that they have another meaning and fear flooded my heart.  He opens doors in our hearts that no one, not even us, can close.  I knew exactly where He was leading with this new interpretation and I was not sure I wanted to follow.  Really, for the first time since I have lived here, I was afraid.  Not for my physical safety but, instead, for my heart.

You see, for almost 7 years I have driven the road to the Children’s Home countless times.  Every time I look at a ramshackle hut built into the side of a cliff. A mass of garbage bags line the front filled with recovered trash from the dumpster in hopes of selling it for pennies to support whoever lives in there. I have often tried to imagine what life is like in there.  The rain streams in through the gaps and holes in the roof and walls.  Cold wind howls through them at night.  Each time I wonder, “who lives there?”

Over the last few months, I have felt more than curiosity. I have felt drawn there as the van zooms by.  I couldn’t stop thinking about the people and worrying about whether they have enough, or anything, to eat.  Each trip past it, the feeling grew more urgent. But what could I do?  I didn’t know who lived there.  How many people live there?  It could be one family or many families.  How would I know how much food to bring?  What kind of people are they?  Violent men?  Gang members?  I would have to go with a Honduran man, I decided, IF I went at all.  Most of all, I feared that if I made contact with the people who live there, they would move into my heart.  The Lord would open a door that I would not be able to close.  It wasn’t just about money.  Food is expensive here but I figured anything I could do would help.  It was more than the time it would require to shop for and deliver food.  My real fear was capacity.  Does my heart have room for more people?  Why are you asking this of me, Lord?

On the last Saturday of October, I took the last team of the year to the airport.  It had been a great week and they were filled with joy.  Joy turned to dismay as we heard the announcement.  All flights in and out of Tegucigalpa were cancelled due to bad weather.  They were rebooked on flights leaving Tuesday!  We returned to Casa LAMB in varying stages of panic.  (“What in the world am I doing to do with them until Tuesday,” I thought. I had not prepared 2.5 days of extra activities!)


Suzy called and offered to come to Casa LAMB on Sunday and have a church service since the children were going to a different church.  It was intimate and lovely.  After the service was over, I felt a spiritual nudge and found myself saying, “Do you remember that awful hut on the side of the road?  How would you feel about taking some food to them?”  The team’s eyes brightened!  It turns out the Lord had placed the same thing on their hearts and provided reinforcements for me, giving me the courage I needed.  We went to PriceSmart and loaded up with rice,beans, flour, sugar and more.  Luis, our driver, pulled over by the hut and got out of the van with us.  There was a teenage boy standing in front of the hut. “Hola!” We brought food for your family!”   He called for his mother.  A
tiny woman stepped gingerly across the plywood bridging the gutter between the
hut and the road.  She has no teeth, was
dressed in filthy clothes, and thin as a rail.
She looked at us puzzled.
“Hola!  We brought food for your
family.”  She looked at her son, “God
brought these gringitos to help us.”  She
explained, “We had no breakfast this morning.”  She broke into a broad grin as her sons took
the food inside.  We introduced ourselves
and she replied, “My name is Doña Santos.” 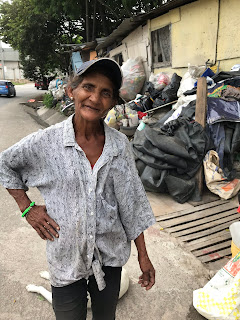 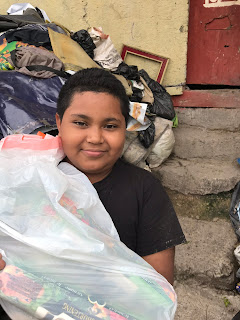 Yep, the door in my heart was opened.  I promised I would come back with more food.  This afternoon, I stopped by again with Suzy and Kristen, a visiting friend of Suzy’s.  When Doña Santos saw us, she recognized us, raised her arms to heaven and looked up and said, “Gracias, Papa!”


This door in my heart is not closing and that’s ok because when God opens it, He makes your heart bigger.  Gracias, Papa.