In Honduras it is very common for extended families to share
the same home.  For the poor, this means
many people squeezing into a very small house.
A family of five may share one bedroom in a two bedroom house.   Often there are multiple generations sharing
the small home.  A sheet hung from the
ceiling provides the only privacy for intimacy for a married couple.   There
is no room to move around or space to be alone for a few minutes each day.
Our collaboration with Torch Ministries has given Suzy and I the
opportunity to provide a home for some of the people we know and dearly
love.  Suzy and I have a
mental list of people who need a house.  Earlier
this summer, the Holy Cross team built a “house in a day” for Virgilio, who helps Suzy with
her yard.  “Virgilio is a new man,” Suzy said recently.


Two weeks before Christ Church
Anglican in Overland Park Kansas was to arrive, Karen, the team leader said
they would like to build a house in a day if possible.  “Great!”
I answered, “Ariel is next on the list.”  (We had built a house in a day for his brother, Jose Luis.  Ariel told me then, two years ago, he would like one too.)  Christ Church knows
and loves Ariel so it was a done deal.  When I told Ariel he smiled and
strode forward ahead of me.  It seemed like a muted response but I could
tell his excitement was growing the closer we got to the day as he asked more
questions to verify we were actually going to do this, made sure the team had
arrived and even called in the morning before we left Casa LAMB to check once
again that this was happening.
Early Monday morning, we met the Torch team on the way to
Ariel’s lot.  We drove as far as we could
and then walked down a dirt road, over a footbridge and up a hill to the site
of his future home.  Of course, we had to
haul all the tools, wood, roofing material, lunch, and water with us.  Each house is 16×16, wood with a raised wood
floor, tin roof, a door and one window.  The
Torch team builds about 100 houses a year.  They got right to it, digging the post holes and measuring out the dimensions off the house.  They agreed upon the placement of the door and window with Ariel.  The Christ Church team figured out quickly how they could help.  Jose Luis and Angel both came to help, sacrificing a day’s work.  Of course, Ariel grabbed a hammer right away!  Soon the framing was done and the teams were hammering away at the floor and walls. 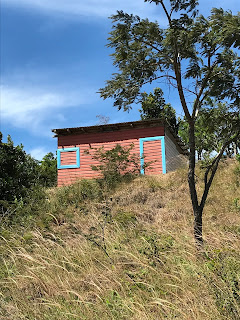 Meanwhile, his brother and co-worker, Jose Luis, took me on
a tour of the area.  “Our family lives in
all these houses.  That one is my sister’s.  That one up there is my uncle’s.”  He invited me to visit the house in a day
Torch built for him a couple of years ago, straight up the mountain.  He proudly showed me the improvements he had
made and his plans for expansion one day.
I explained to him that in the US people pay big bucks to have a view
like he has!  It was there he shared with
me how he became a Christian. (Read his story here.) When he was 19 a friend invited him to
church.  The pastor was preaching and
suddenly he got chills and felt “filled.”
He came forward and said to the pastor, “I accept Jesus.”  At that moment, Jose Luis, who never had a
relationship with his father, heard a voice, “I love you.  I am your father.”
As we were walking back down to the build site, Jose Luis
asked me if I knew about Ariel’s situation.
I didn’t. Ariel has been living with his 2 sisters.  The landlord is evicting them.  They have until right before Christmas to
move out.  The sisters have a place to go
but Ariel didn’t.  Unbeknownst to me,
this has been weighing on him heavily.
Making $13 a day, 4 days a week only when we have teams does not allow for any
savings.  “Amanda, for Ariel this is a
miracle.”  I believe his initial muted
response was the reaction to the unexpected answer to his prayers.  Two years after his initial request and just in the nick of time, he was going to get a house.
We spent the next couple of hours building the house
together.  More and more family members
and neighbors arrived to watch, smiling and sharing Ariel’s blessing. When the last board was nailed, the roof on, and the new
floor swept, we all gathered inside to inaugurate his home with prayer and
love.  “It is so big!” he exclaimed. Angel sang, we all prayed, and
hugged.

Ariel’s response now?  See for yourself.  His smile went from ear to ear and his face
shone all day.  The team retraced its
steps back to the van for the ride home, all filled with joy and walking lighter
knowing we had been part of Ariel’s miracle.