Jesus Christ, the Man for Others,
We, your children, make our prayer:
Give us grace to love as brothers
All whose burdens we can share
(From hymn Father, Lord of all Creation)

Bill Curry’s medical brigade was here last week. As always it was wonderful. Hundreds of people were seen by the US and Honduran doctors. They left with bags filled with meds we take for granted that are completely inaccessible to them – Tylenol, cough drops, tums, worm pills (well, OK, we don’t take them often in the US!) and more. Babies were held, children hugged, little old men proposed to (by me, much to the delight of the little old ladies present!) thousands of stickers stuck to hands and shirts, countless smiles exchanged. A great time was had by all.

In my blog I often write about events from the Northamerican point of view – what an experience meant to us/me. This time I want to present an event from a Honduran’s point of view, with some artistic license on my part…

“I got up early this morning. Yesterday was the anniversary of my daughter’s death. She would have been 28. I still look for her to walk in the door. I can hear her laugh. I think I see her out of the corner of my eye. I turn quickly to call out to her but she isn’t there. It breaks my heart all over again. With a heavy heart I put on my orange vest and grabbed my broom to go to work sweeping streets. I guess this government program is good, although it doesn’t pay much and often they don’t pay us for months. I don’t have any other work so every day I sweep and hope in the hot sun and driving rain. I heard about a clinic happening in a church. I stopped by to see a doctor. They gave me a number but it was at the end of a long line. I can’t be away from work that long. Just as I was about to leave, a woman called me to the door of the clinic and said, “Come in. We’ll take you right now.” I was surprised. I am used to being at the end of the line. Soon it was my turn to see the doctor. He smiled at me and said something in English that sounded nice. The Honduran lady translated everything he said. I was telling him about my aches and pains when suddenly my daughter came into my head. I couldn’t help myself and started to cry. I explained to them what had happened. The doctor stopped what he was doing and listened to me. I could see tears in his eyes. This northamerican doctor came from so far away to be in my little village and he stopped to listen to me. Then the lady from the door appeared and they all began to pray for me. They put their hands on me and prayed while I cried for my precious daughter. When we said amen, I felt different. As I stood to leave, the doctor  hugged me. My clothes were so dirty and his were so clean but he hugged me. My heart still hurts for my daughter but I feel lighter somehow. I left with a bag full of medicine but so much more. Is this what Jesus meant when He said He will always be with us?” 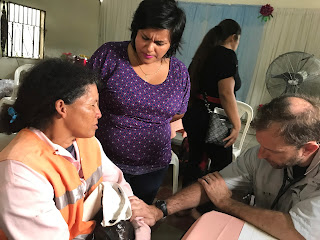