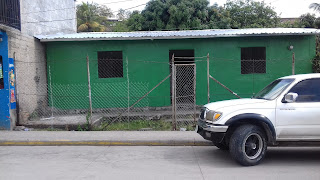 Suzy had been longing to get back into urban ministry.  Not long ago, she was driving down the main street in Flor del Campo, a route she takes often to go to our school, when she saw a small house for rent right across the street from the “cancha” – the large soccer field.  She stopped to write down the phone number on the for rent sign, drove home and called the number.  Next thing she knew she had rented the small house.  Why? She didn’t really know.  All she knew was she had to rent that small house.  In April, Suzy wrote:

Arely and Evelyn met me at the Little Green House.  We walked through it (which takes about two seconds), talked about possibilities, and then prayed together that it would be a place of peace and joy and growth.  We invited the Holy Spirit to make His home there.

Suzy had already told the children at the Children’s Home about the house and invited them to participate in the transformation of the house.

I shared with them how I feel that it is a Kingdom initiative because so many of them came to us from Flor del Campo, and now they can go back as God’s ambassadors.  Now they have the best Gift of all to offer  others.  We are going to paint murals on the front of the house.

Now the house is inviting and draws attention to itself with the message, “Something beautiful happens here.” 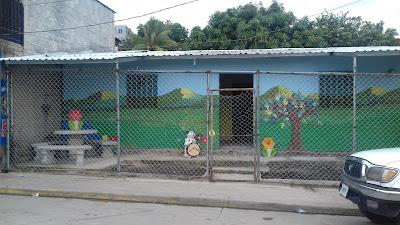 Finally we were ready to have the grand opening of the newly named “Casa de Oracion.” (House of Prayer)  The open invitation to the grand opening was for 5 – 8 pm.  We got there early to get everything ship shape!
We had no idea who or how many people would come.  We joked that the party was scheduled to start at 5 but, knowing the Honduran culture, people would start arriving at 6!  Imagine our surprise when the room started filling up at 4:45!

Soon both of the rooms in the house were full and the front porch was too.  I was moved that most of the women there were from La Cantera, where the poorest of the poor live, where the gangs rule and where prayer is much needed. Ladies from David and Evelyn’s church, Amor Fe Vida (Love, Faith, Life) made a huge tub full of delicious naca tamales.  No one knew how many people would come.  As people arrived, we delivered plates of naca tamales and a drink. I started to worry that we would run out.  Some (mostly men) were too shy to come in the house so we fed them just inside the fence or on the street.  The naca tamales kept coming.  Then, the big blue bus with the Children’s Home kids arrived.  Uh,oh, I thought, we won’t have any food left for them.  The naca tamales kept coming!  As I went to get more plates I commented to the ladies, “this is just like the loaves and fishes!”  They agreed!  We ended up having exactly enough to feed everyone who came by for food.  Miracle!


The program was wonderful.  It wasn’t planned minute by minute and beautiful spontaneous worship, prayer, fellowship and music happened.  Suzy’s message that the House of Prayer is for everyone, not one church or another, that we all love Jesus and we are here to listen, to pray, and to be community resonated with all.