Years ago, while still working for IBM, someone told me I was not “evangelical enough.”  Startled, I vigorously defended my efforts to share the good news.  Later I realized this person actually meant I was not enough of an Evangelical.  As a cradle Episcopalian, I vigorously agreed!

I have been in Honduras for almost 5 years.  I have spent time with many Evangelicals, with a capital E, members of the Evangelical Movement in the US.  The Episcopal liturgical tradition feeds my soul yet I have come to see that aspects of the Evangelical tradition enrich my own prayer and worship.  I love all the “capital letters” who come down.  We have Methodists, Anglicans, Presbyterians and Non-denominationals.  I learn something from each of them. 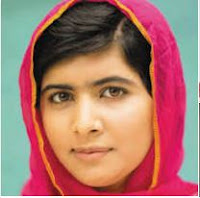 I recently watched the movie, He Named Me Malala.  I consider Malala to be a representative of the true Islam.  I am inspired by Malala, 17 year old Nobel Peace Prize recipient, and her father.  Their peaceful and forgiving spirit, born out of their faith, is beautiful and an example for us all. Malala, shot in the face for simply going to school, has never had one “quark of anger.”  Imagine.  I heard her in an interview say that if threatened again, she would throw her shoe at the attackers!

I am saddened when we focus on the differences between us, whether it is which Christian capital letter one is, which political party one chooses, or which religion one practices.  It grieves my heart to hear people judging who is “in” (heaven) and who is “out.”  Can we really say that Ghandi, the Dalai Lama, and Malala are “out?”  Can people of other faiths say that Martin Luther King, Mother Teresa, and Suzy McCall are “out?” For Christians, Jesus was very clear about division of responsibilities.  He judges, we love.  In the midst of our differences, we have one thing in common. We are all trying to be faithful.  So, I am content to let the Lord sort things out in His time.

It seems to me, aspects of other religions may enrich our own faith and lives.  For me, I aspire to have the love and forgiveness for my enemies that young Malala already has. Buddhists have much to teach me about meditation and reflection.  Hindus can show me how to see God in every living thing.

Hermanos y hermanas in Christ, let us not pat ourselves on the backs when we are so “tolerant” of differences.  Instead, let us embrace differences!  Let us open our hearts and minds to all that is beautiful no matter what the source.  Truth is truth, beauty is beauty.  Most of all, let us seek God in each other and love one another as He loves us!

Feliz Navidad!  May you have a blessed and joyful Christmas!

I love each of you very much!