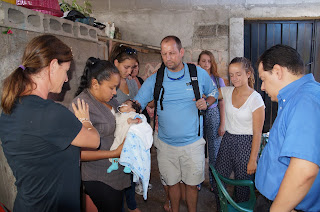 One week this summer we had a small team instead of the usual large ones.  It was also our school’s vacation week, i.e. no Wednesday morning devotional.  I felt bad for the team, all of whom were here for the first time.   As compensation, we visited several micro-credit clients.  Each visit was eye opening and inspiring but the team was getting tired.  “Just one more visit,” I promised!  We went to a tiny pupusa restaurant, behind a wall and locked door.  As we waited for our food, there was a small knock at the door. In walked a young woman and her baby.  The newborn was obviously ill, which the feeding tube in his nose confirmed.  The young mother shyly said, “I saw you on the street.  I came so you could pray for my baby.”  Laying on hands, they circled the mother and baby in prayer.

A Honduran newspaper article stated a 10 year old girl, abused by her step father since she was 6, had just given birth.  Social services was unsuccessfully looking for an organization to take in the mother and baby.  Meanwhile, Evelyn, our co-director, was working on her computer in the office.  Suddenly, inexplicably, the article appeared on her screen. Evelyn immediately picked up the phone and called social services.  “We’ll take them.” 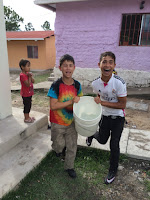 At the Children’s Home a thirsty child grabs a cup and fills it with pure water from the sink.  Down the hall, a toilet flushes.  Outside, children and team members shriek with laughter as a water fight breaks out.  A year ago this would have been impossible because we didn’t have running water.  Now, thanks to gifts large and small from many, many people the children live
water-filled lives! 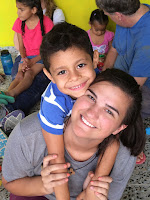 A six year old boy was sent out by his mother to sell his 18 month old sister for $20.  “If you come back with her, this time I will break both of your arms.”   God sent social
services to intercept them and delivered them to us.  All summer the boy flopped down on every available lap, jumped into open arms, held countless hands of team members – all telling him he is loved, his sister is safe, and he can be a little boy for the first time in his life.

This summer reinforced for me that serving God is about partnership, working together with Him through prayer, action, giving, and presence to make manifest the kingdom of God. Thank you for partnering with God in your support of LAMB.   It makes a difference.
Christ has no body now on earth but yours,
no hands but yours,
no feet but yours,
yours are the eyes through which Christ’s compassion
is to look out to the earth,
yours are the feet by which He is to go about doing good
and yours are the hands by which He is to bless us now.
St Teresa of Avila