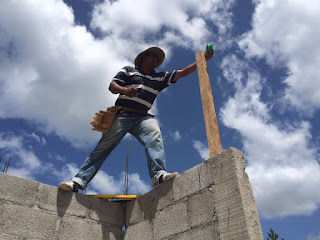 Many years ago (decades ago) this poem by Langston Hughes moved me.  I even needlepointed it on a pillow.  (My first and last attempt at needlepointing.)  Yesterday, the poem shook itself out of the cobwebs of deep memory and filled my heart once again.  You see, I was watching Jose Luis, the construction worker, build a structure outside the back corner of the new cabin we are working on.  He was explaining to me what he was doing and how it fit in with the roof structure.  I understood the Spanish but not the concept.  I don’t have a brain for spacial relations and the angles and the whatevers he was talking about made no sense to me.  He was talking as he was building, using no drawings, just his mental image.  Then he paused, looked at me and smiled and said, “I would like to be an engineer…but I can’t read.”  He worked a bit more, looked up and said, “I want to learn to read.”
I had to leave, to be alone.  I found a hidden corner of the building and wept. And prayed.  I have known for quite awhile that Jose Luis can’t read.  He is 33 and has never been to school.  He grew up on the streets, making shoes out of old tires and rope.  Begging for food, occasionally being taken in for the night by a kind person.  He started working construction at 13.  Those of us who have worked with him know him as a fun loving, joyful, patient friend.  He has taught countless team members how to make concrete, to lay blocks, to assemble rebar, and other construction tasks foreign to us.  He makes us feel capable, helpful, and valued.  He joins us for lunch and sings along with Angel as he plays the beautiful Spanish praise songs.  He is a brother to us and all leave feeling richly blessed having met him.   After all this time, this was the first time he shared his dream.   This grand dream, for which he is emminently qualified, is so out of reach.  I wept, bent over double, and prayed.  Or tried to pray.  I was so overcome that I really couldn’t form words.
But here’s the thing.  Jose Luis holds fast to his dreams.  As he quickly figured out the labor cost for the roof on his calculator (again, I understood the words but not the concept) he explained, “My mother and father did nothing for me but God gave me a good mind.  He raised me.”  Fighting back tears, I smiled and agreed that he is very intelligent.   That dream…so inaccessible…
Or is it?  How can I forget that our God is a great God?  Later that day I was talking to Arely, the director, about plans for the following week.  I don’t know why but I told her about my conversation with Jose Luis, crying once again.   Her eyes brightened, “Oh!  Julio has been doing a project for school teaching people how to read!  We can extend the project and have him teach Jose Luis!”Honestly, can you think of a better person to teach Jose Luis (or anyone) to read? One of the current team members, a teenager here for the first time observed that perhaps God brought Julio to SBV for a reason, for a special purpose.  Yes, indeed.
I don’t know what will happen but I will do all I can to support this effort.  Most of all, I join Jose Luis in holding fast to his dream and share his trust in the God who raised him to be the man he is.